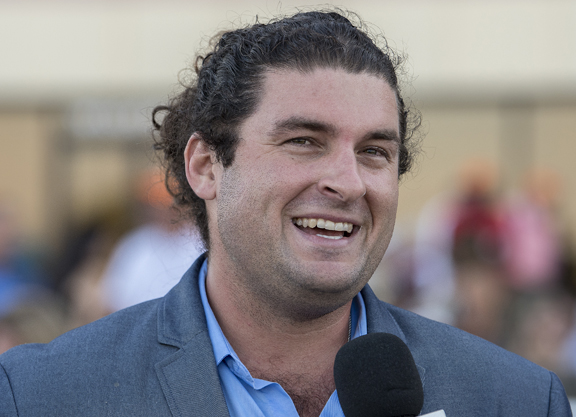 Saffie Joseph Jr. lived what many might call an idyllic life in his native Barbados. Since relocating his family and bourgeoning racing stable to Southern Florida in 2011, however, the third-generation horseman has seen his own American dream given wings as he begins to realize his childhood ambitions. After arriving in the U.S. with only two horses, the 33-year-old's operation has expanded to a team 65-strong, including Grade I winner Math Wizard (Algorithms), GI Kentucky Derby hopeful Chance It (Currency Swap) and undefeated Tonalist's Shape (Tonalist). And while Joseph points out that the horses, and the expanding team of dedicated owners who support him, are important factors in his success, the father of two acknowledges that his predecessors were the ones who planted the seed and cultivated his passion for racing.

I've basically been in horseracing my whole life,” explained Joseph. “My dad [Saffie Joseph Sr.] was a trainer and our granddad [Attie] was an owner. I was born into racing. Racing has been a family tradition.”

Born on the island of Barbados in 1987, Joseph was introduced to horses early on by his father Joseph Sr., who was a trainer on the island, and his grand father Attie Joseph, a successful owner in the Caribbean. He admits he can't remember a time when horses didn't play a major part in his life.

“My granddad started it all,” he said. “He was one of the top owners in Trinidad and Barbados. My aunt [Claudette], also had some of the horses run in her name, too. Between the two of them, they were fortunate to win a lot of big races.”

Joseph, who took out his training license at age 18, credits much of his present-day success to his father, who served as a mentor to the aspiring young horseman.

“Most of our system is basically based under his philosophy,” said Saffie Jr. “My dad taught me, if the horses are happy, they're going to run. And they're going to run through little things that are insignificant. That's the main thing. Just keep them happy and stay on top of things.”

According to Joseph, his father remains an integral part his Gulfstream Park-based operation, and continues to exact the same work ethic that inspired him early on in his career.

He added, “He taught me the value of hard work and that's what I try to enforce with our team, too. We know we're going to work hard, but the success will come back to us. It's all very rewarding.”

Rising Star
Not without an abundance of time and effort propelling it, success came early in Joseph's career when, at just age 22, he became the youngest trainer in Barbados's history to win the Triple Crown in 2009 with Areyoutalkintome.

Bolstered by the experience, Joseph realized it was time to make a change if he was going to take his game to the next level.

“Barbados is limited since they only race twice a month,” explained Joseph. “Over there, it's more of a hobby as opposed to America, where it's more businesslike. And my dream was to win the best races in the world. As a kid, I used to see the stars on TV–Bob Baffert, Nick Zito and D. Wayne Lukas. I dreamed that one day I could run against them.”

Joseph arrived in the U.S. with only two horses and one of them, Artifacto, won his first three stateside starts. Despite the taste of success, however, the early years weren't without their challenges.

“It was hard at the beginning because we owned all the horses ourselves,” he recalled. “My dad, myself, we had six or seven horses. Artifacto won his first three races in America, but outside of that, it wasn't easy.”

Gradually building his operation through the better part of the last decade, Joseph's hard work paid off with a horse named Math Wizard, who got up in the final jump to collect the first Grade I victory for the barn in the Sept. 21 Pennsylvania Derby at Parx. The colt was fifth in the Nov. 2 GI Breeders' Cup Classic at Santa Anita in his most recent start.

“To be honest with you, going into the [Pennsylvania Derby], I didn't think we could win,” admitted Joseph. “I thought we had a chance, but I was hoping to get a good pace. Just to see it happen was surreal. It brought tears to my eyes. It's probably one of the greatest days of my life in horse racing.”

After initially considering the GI Pegasus World Cup Invitational at Gulfstream for the chestnut's 2020 debut, the team finally decided to ship overseas to contest the $20-million Saudi Cup Feb. 29.

“If Math Wizard goes to Saudi Arabia [Saudi Cup Feb. 29] and all goes well, we're obviously out there so we would like to go to [the G1 Dubai World Cup Mar. 28] next. After Dubai, we'd probably bring him back to the U.S. and give him another break. Then we'll map out a plan for later in the year with him.”

With the older horse division solidly covered, Joseph has also thrown his hat into the sophomore division with a pair of up-and-coming 3-year-olds, Chance It, a two-time stakes winner at two before annexing the Jan. 4 Mucho Macho Man S. in his 2020 bow, and undefeated Tonalist's Shape, winner of Gulfstream's Hut Hut S. Nov. 30.

“Chance It showed a lot of guts last time,” said Joseph of the Mucho Macho Man. “Coming back off a [four-month] layoff and to have to belly down the way he did, shows us he is a special horse.”

Chance it is slated to make his next start in the GII Fasig-Tipton Fountain of Youth S. Looking ahead to the first Saturday in May, Joseph added, “I think he's definitely a Derby horse. There are a lot of expectations, obviously, but there's a lot of hope that he's the horse that could take us there. He has a lot of speed and stamina doesn't seem to be a problem for him. In my opinion, he's one of the best horses in the country.”

Also armed in the filly division, Joseph has high hopes for Tonalist's Shape. A debut winner for trainer Juan Carlos Avila at Gulfstream last September, she won her first start for Joseph at Gulfstream Park West in October before airing by nine lengths in the eight-furlong Hut Hut.

“She was very impressive,” said Joseph. “It was her first time stretching out. Obviously, they need to do it, and until they do it, you never know. But she did it the right way, so we're excited about her.”

According to Joseph, the chestnut is expected to make her next start in the seven-furlong GIII Forward Gal S. at Gulfstream Feb. 1.
“We definitely think she's going to get even better when she goes two turns,” he opined. “We're cutting her back in trip a little bit to seven eighths, but it's a good starting point.”

“About two years ago, there were times where I thought, 'is it going to happen?' You know you're capable, but you need opportunities. Without owners providing opportunities, it makes it very difficult. So, we're thankful for all the owners that give us all these chances because without the owners, we're nothing.”

He continued, “There was never doubt in our ability, but there was doubt in would it happen. I think God just had things aligned that kept us working hard and trusting it would come through. Right now, everything is rolling. We have a good team behind us and just want to keep winning. We just love to win.”

And as the wins continue to stack up and Joseph checks off the boxes on his long-held wish list at a rapid rate, he acknowledges that there is more he would still like to accomplish.

“We would like to become one of the top trainers in America and win races like the Breeders' Cup and the Kentucky Derby,” he said. “I realize that I've been dreaming of this my whole life and now we're getting to a point where it's actually becoming a reality.”