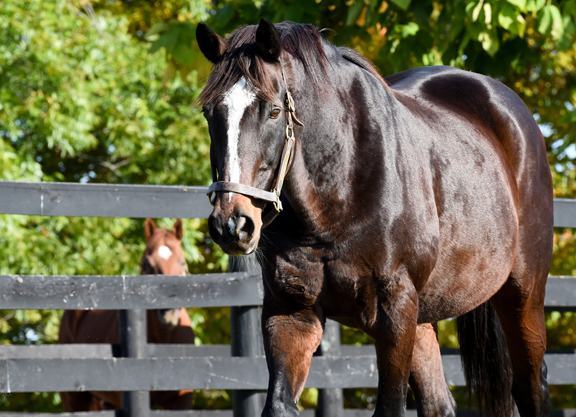 Tiznow (Cee's Tizzy-Cee's Song, by Seatle Song), the only horse to have won back-to-back runnings of the GI Breeders' Cup Classic, has been pensioned from stud duty, it was announced Oct. 21 by WinStar Farm.

Owned by Cees Racing Stable and trained by Jay Robbins, Tiznow developed rapidly after breaking his maiden in his third career start. Six months later and after wins in the GI Super Derby and the GII Goodwood Breeders' Cup H., he won his first Breeders' Cup, edging Giant's Causeway by a neck. Thanks largely to the Breeders' Cup win, he was named champion 3-year-old and Horse of the Year.

As a 4-year-old, he began the 2001 season with a win in the GII San Fernando Breeders' Cup S. and, two starts later, won the GI Santa Anita H. He was defeated in his next two starts, but Robbins again had him primed for his best effort in the Breeders' Cup Classic. This time he won by a nose over Sakhee (GB). The race was run at Belmont Park and came just six weeks after the Sept. 11 terrorist attacks. As the horse crossed the wire, announcer Tom Durkin said, “Tiznow wins it for America.”

“His name ought to be Tiz-awesome,” winning rider Chris McCarron said. “He's an incredible horse. He gives us shivers and concerns, but he's always there at the end.”

Tiznow, who was named champion older horse in 2001, retired after his second Classic win, wrapping up a career that saw him win eight of 15 starts and earn $6,247,830. His next stop was WinStar Farm where he went on to have a long and productive career as a stallion.

At the outset, there were reasons to be skeptical about Tiznow's stud career. A California-bred by Cee's Tizzy, who never won a stakes race, he didn't have a fashionable pedigree and he was a late-developing colt that didn't check the boxes that are precocity and speed. But he went on to be one of the most successful stallions of his era.

He was the leading freshman sire in 2005 and his first crop included G1 Dubai World Cup winner Well Armed and 2005 GI Breeders' Cup Juvenile Fillies winner Folkore, who was named 2-year-old champion that year. Other notable winners include Tourist, the winner of the 2016 GI Breeders' Cup Mile, and Colonel John, the winner of the GI Santa Anita Derby and the GI Travers S. in 2008. In addition to Folklore, Tiznow was represented by Sovereign Award winner Bear Now; Blue Chipper, champion sprinter and miler in Korea and third in the 2019 GI Breeders' Cup Dirt Mile; and a pair of champions in Mexico.

As a sire, Tiznow was as consistent as they come. He was third on the American general sire list in 2008 and fourth in 2009. From his more recent crops, he produced 2017 GI Hopeful S. winner Sporting Chance, 2019 GIII Iroquois S. winner Dennis' Moment and 2019 GII Nijinsky S. winner Tiz a Slam.

To date, Tiznow is the sire of 80 black-type winners, including 45 graded/group winners and 14 Group 1/Grade I winners.

Tiznow's producing daughters have accounted for 39 stakes winners, 23 graded winners and seven at Grade I level. His daughter Tizfiz is the dam of GI Belmont S. hero and GI Kentucky Derby runner-up hero Tiz the Law (Constitution) and he is also the broodmare sire of Come Dancing (Malibu Moon), a candidate for the GI Breeders' Cup Filly & Mare Sprint.