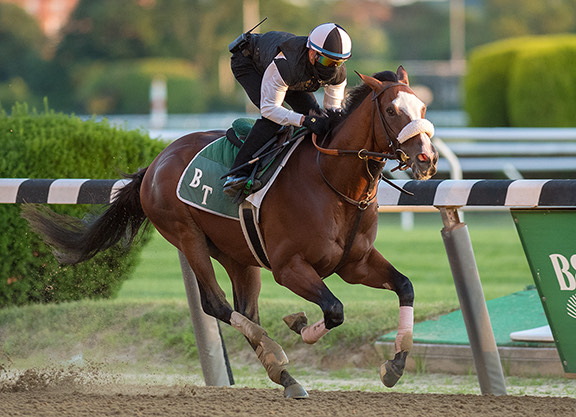 Sackatoga Stable's Tiz the Law (Constitution) breezed a half-mile Sunday at Belmont Park in his final work ahead of next Saturday's GI Belmont S. Jockey Manny Franco was aboard the bay colt who, working solo from the half-mile pole, breezed through splits of :26.50, :50.42 (41/46) and out in 1:03.12.

“He went well. We weren't looking for anything special today,” said trainer Barclay Tagg, who ponied Tiz the Law to and from the work.

Franco added, “When Barclay turned me loose, he got strong a little bit, but when we passed the seven-eighths to the three-quarters, he settled down a little bit and he did it nice. He did it really well and really easy, so I'm very happy with the work.”

Tiz the Law captured the GI Curlin Florida Derby in his most recent start Mar. 28. In his first work after shipping up from Florida, he went five furlongs in 1:00.53 (5/9) last Monday.

Saturday's Belmont S. will be run at nine furlongs this year, the same distance as the Florida Derby.

“He makes my work a lot easier,” said Franco. “He's a versatile horse. He can be there on the pace or sit off, so I can do whatever I want. He's run here before and won and I think he likes the track. So, that's to our advantage.”

With regular rider Junior Alvarado in the irons, Modernist worked in tandem with two-time graded stakes winner Tacitus (Tapit), who was piloted by Hall of Fame jockey John Velazquez, recording a :24.40 opening quarter and galloped out in 1:11.40 over a main track rated “fast.”

“He broke off in a nice rhythm and turning for home I was one length behind Tacitus,” Alvarado said. “As soon as we turned in, we got together and galloped out. I thought the work was extremely good.”

Winner of the Feb. 15 GII Risen Star S., Modernist was most recently third in the Mar. 31 GII Louisiana Derby.

“We're going to have an owner conversation before too long,” trainer Bill Mott said of Modernist's potential next start. “The work looked good, nice and smooth. Modernist and Tacitus both worked together and looked great. They finished up well, galloped out nice and strong.”

In addition to the Belmont, the colt is also considered possible for the June 27 GIII Ohio Derby.