Tiz the Law To Shuttle to Chile 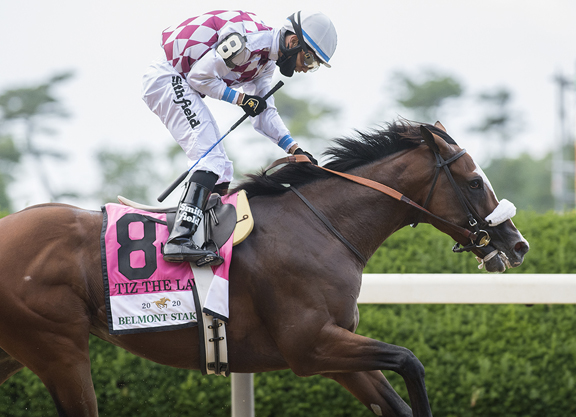 Tiz the Law (Constitution–Tizfiz, by Tiznow), a four-time Grade I winner who is finishing up his first year of covering duties at Coolmore's Ashford Stud in Versailles, Kentucky, will shuttle to Haras Paso Nevado in Chile for the upcoming Southern Hemisphere breeding season, Turf Diario reported Thursday.

A $110,000 graduate of the Fasig-Tipton Saratoga New York-Bred Sale in 2018, Tiz the Law raced in the maroon-and-gray colors of Sackatoga Stable and was trained by Barclay Tagg to a four-length victory in the GI Champagne S. in just his second career start. After suffering his first career defeat when a troubled third in the GII Kentucky Jockey Club S., the blaze-faced bay colt won his first four starts of 2020, including the GI Curlin Florida Derby, the GI Belmont S. and the GI Runhappy Travers S. A game runner-up in the GI Kentucky Derby last September, Tiz the Law was unplaced in the GI Breeders' Cup Classic and was retired to the breeding shed with a record of 9-6-1-1 and earnings of $2,735,300.

Tiz the Law's boom sire Constitution has been nearly as big a hit in Chile as he has in the U.S., with 44 individual winners, among them seven black-type winners, including the top-level scorers Breakpoint (Chi)–now in training with Chad Brown at Belmont Park–First Constitution (Chi) and Alaskan Queen (Chi).

Haras Paso Nevado has been home to several Ashford shuttlers over the years, including the late Scat Daddy, Lookin at Lucky, Powerscourt (GB) and Verrazano. More recently, they have welcomed young Coolmore sires Practical Joke and Classic Empire to their roster.