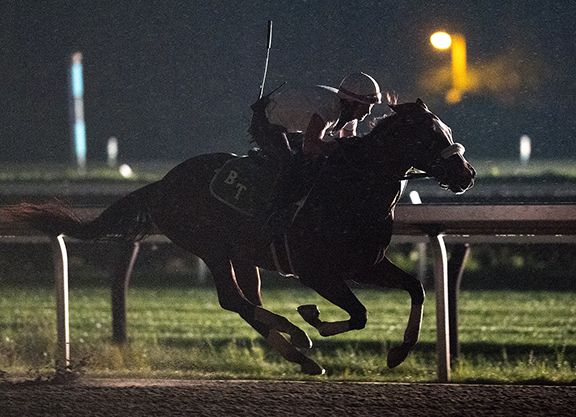 Likely GI Kentucky Derby favorite Tiz the Law (Constitution) topped a list of sophomores putting in their final breezes ahead of the Run for the Roses/Lilies Saturday, covering five panels in :59.21 (1/3) on the Saratoga main track.

5:45 a.m. in an attempt to beat the incoming rainstorm. With regular breeze rider Heather Smullen in the irons, the flashy bay covered his first three furlongs in :36.01 and galloped out in 1:12.01.

“Everything went fine. He came back well,” trainer Barclay Tagg said. “He did everything he was supposed to do. I'm satisfied with this work. We had to make the decision this morning to work him. We made the decision around 4:00. Luckily, it wasn't raining when he was working. It's supposed to rain all day, and the track may be worse tomorrow. I'm glad we got the work in.”

Tiz the Law is scheduled to ship to Churchill Downs Monday and regular rider Manny Franco will join him Louisville.

“She worked beautifully,” Baffert said. “She's coming into the race very well and I'm very happy with her right now. It's going to be a tough race, very competitive, but we're excited and she looks ready for it.”

“A good work, all we were looking for,” trainer Peter Eurton said. “If he comes out of it well, we're headed East.”

“I just wanted an easy seven eighths,” trainer John Shirreffs said. “He got it; we're good to go. Now we just need a bit of luck. You need some of that in that race.”

The West Coast contingent for the Oaks and Derby is scheduled to ship Monday. John Velazquez rides Gamine and Baffert's top Derby contender Authentic (Into Mischief); Florent Geroux has the call on Thousand Words; and Julien Leparoux is slated to ride  Storm the Court.

Derby & Oaks Breezers Out in Full Force at Churchill

Swiss Skydiver (Daredevil), Gamine's chief market rival in the Run for the Lilies, was among the Oaks and Derby contenders breezing beneath the Twin Spires Saturday. The GI Alabama S. heroine went a half-mile in :49.20 (8/40).

“We went to the frontside [to watch],” trainer Kenny McPeek said. “It was just a happy half-mile, just something to stretch her legs a little bit. Uncomplicated. Brian knows her well. It was nice of him to come by and get on her. All systems go.”

“I thought the work was perfect,” said Beschizza, who also had worked Enforceable over the winter at Fair Grounds. “He went a scratch under :50. Mark [Casse] and [assistant trainer] David [Carroll] just wanted to keep the lid on it. His major work was in the bag.”

“[Trainer Juan Avila] asked me to go easy and it was exactly what the horse needed,” exercise rider Edgar Garcia said. “I thought he galloped out around the turn well and was moving very easy on the track. He doesn't need to do much, he's pretty fit.”