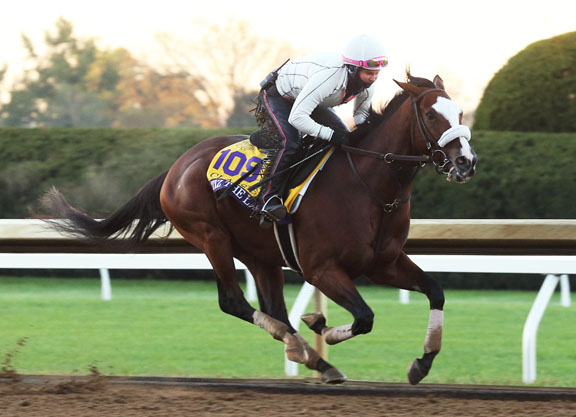 With his regular work rider Heather Smullen in the irons, the New York-bred drilled five furlongs in :59.20 and galloped out an extra eighth of a mile in 1:12.20 (video).

“I saw just what I wanted. He went perfectly,” said trainer Barclay Tagg who will send out his 11th Breeders' Cup starter next weekend. “We wanted him to go in :59 and he went in :59.20, so it was just right.”

Tiz the Law will be making his first start since dropping a 1 1/4-length decision at the hands of Authentic (Into Mischief) in the Sept. 5 Kentucky Derby and was an early arrival at Keeneland Oct. 18. Saturday's work was his second locally, having breezed three-quarters of a mile in 1:13.20 Oct. 23.

“I thought he needs to get a good feel of this track (because) he has never run over it,” Tagg said of the plan to ship in the colt on the early side. “He has to run against older horses; it is going to be a tough race. I have a super-duper crew and everything has gone right. We pay attention to the horses. We carry 30 horses at the most and try to get the best out of what we got, and every now and then we get a good one.”

Hronis Racing's Higher Power (Medaglia d'Oro) has been on the grounds at Keeneland since early October and also tuned up for the Classic Saturday with a strong five-furlong work that was timed in :58.80, with a six-furlong gallop-out in 1:11.60 (video).

“I liked the way he came back from it,” said former jockey Juan Leyva, who serves as assistant to trainer John Sadler and who rode Musical Romance (Concorde's Tune) to an upset victory in the 2011 GI Breeders' Cup Filly & Mare Sprint. “He was blowing a little bit but not out of this world. His level of fitness has really progressed here.”

Gary Barber, Wachtel Stable and Swilcan Stables' Vequist (Nyquist) arrived into Lexington from Philadelphia this past Monday and geared up for her start in next Friday's GI Breeders' Cup Juvenile Fillies by zipping a half-mile in :47.20 for trainer Butch Reid (video). The 9 1/2-length winner of the GI Spinaway S. at Saratoga Sept. 6, the dark bay was a latest second to the impressive Dayoutoftheoffice (Into Mischief) in the GI Frizette S. at Belmont Oct. 6.

“I think a work over the track is very important and that is why we came when we did,” Reid said. “She had three or four good gallops and the work was fine. She did work at Saratoga [before the Spinaway] but didn't before the Frizette because Belmont is just up the road from Philadelphia.”

Reid, who won the 2011 GII Breeders' Cup Marathon with Afleet Again (Afleet Alex), said that Joel Rosario will have the mount Friday.

The Saturday morning worktab across Interstate 64 at Churchill was equally busy at it was at Keeneland, with no fewer than 27 Breeders' Cup pre-entered horses getting in their final serious work.

The two females that will vie for favoritism in Saturday's GI Longines Breeders' Cup Distaff were the marquee names on a chilly Louisville morning. Monomoy Girl (Tapizar) was one of a half-dozen workers for trainer Brad Cox, and the 2018 GI Breeders' Cup Distaff heroine tuned up with a steady five-furlong work that was timed in 1:01 flat. With Florent Geroux up and galloping in the company of GI Dirt Mile hopeful Owendale (Into Mischief), Monomoy Girl went in fractions of :12.80, :24.60, :37 and :48.40 before pulling up six furlongs in 1:14.40 (video).

“She's a champion mare and really a horse of a lifetime,” said Geroux, winner of four other Breeders' Cup races in addition to the Distaff. “She's a future Hall of Famer with her resume. The speed figures show she is a little bit faster this year than her 3-year-old year.”

Swiss Skydiver (Daredevil), last-start winner of the GI Preakness S., breezed five-eighths of a mile in 1:00 flat in :24.60, :36.40 and :48.20 before galloping out six furlongs in 1:13.20 (video). While trainer Ken McPeek and owner Peter Callahan still have some work to do, Swiss Skydiver is likely to take up her spot against her peers on Breeders' Cup Saturday.

“At this point we're going Distaff unless there's a late defection from the Classic,” McPeek told pool reporters Saturday morning. “We had a chance to look at not only the regular past performances but all the Ragozin numbers and that's what we're doing.”

McPeek says Swiss Skydiver has been ticking right along and is pleased with what he saw on the track Saturday morning.

“She busted out :12s,” he said. “[Jockey] Robby [Albarado] really does have her number right now, he's got her in nice rhythm out there and knows how she feels under him. I think we're well loaded and we've got her right on even keel.”

McPeek, still in search of a maiden Breeders' Cup victory, also sent out GI Darley Alcibiades S. romper Simply Ravishing (Laoban) to work five-eighths in 1:00 flat. She and Swiss Skydiver worked on their own.

Tom's d'Etat (Smart Strike) will enter the GI Breeders' Cup Classic with just three starts under his belt this season and will be having his first run since a troubled third to Improbable (City Zip) in the GI Whitney S. at Saratoga in early August. The dean of the field at age seven, the G M B Racing runner breezed a very easy four furlongs in :50.40 Saturday morning.

“We really just wanted to go out there and stretch his legs,” said trainer Al Stall, Jr. “It was just get him around there, save a lot of energy and come out of it nice and just be ready for Saturday.”

Bell's the One (Majesticperfection) may lack the star power, even with her defeat of Serengeti Empress (Alternation) in the GI Derby City Distaff Sept. 5, but the 4-year-old continues to thrive and worked a smooth half-mile in :47 3/5 at Churchill Downs Saturday morning.

“She did just what we wanted, just wanted an easy half and did it very easily and we're set to go,” trainer Neil Pessin told pool reporter Alicia Wincze Hughes.

The defection and subsequent retirement of Bellafina (Quality Road) could make life more difficult for Bell's the One, in Pessin's estimation.

“I don't know if anyone is fast enough to go with Serengeti,” he opined. “Bellafina was, she laid right off her. Venetian Harbor (Munnings) and Gamine (Into Mischief) are speed horses, but they've never gone faster than :45 in their lives and Serengeti can go :43 3/5. If they go :44 and two or three, that sets it up better for Serengeti than for us. But we're doing good, my filly is going to run her race and hopefully we can catch them at the end.”

“He was out there doing his thing,” Baffert told the TDN when reached by phone. “He always works alone, him and Improbable. They are both very willing. He bounced out of the Preakness really well and his last two works were pretty strong. He is about as ready as I can have him. I really like the way he is coming into this race.”

“He went well,” Baffert said of Maximum Security. “He is the lazier type [in his breezes], but he gets enough out of his works. He looks great. He will be right there.”

'TDN Rising Star' Gamine (Into Mischief) clocked the fastest five-furlong work of the Baffert trio, covering the distance in :59.40 (2/53) (video). An ultra impressive winner of both the GI Longines Acorn S. and GI Longines Test S., the bay was last seen finishing third in the GI Longines Kentucky Oaks Sept. 4 and will cut back in trip for the GI Breeders' Cup F/M Sprint S.

“Gamine looked fantastic,” Baffert said. “She just sat there with another horse and when he asked her to pick it up, she just went boom. She has matured and just looks really good coming into this race. She has been on the lead and she makes the lead because she is brilliant on her own. But, she is not a speed crazy type of horse. I can see she is on top of her game.”

“She worked [Friday]. She looks great,” Baffert said. “On paper, her numbers don't stack up to those other fillies, but she has done everything here in a hand ride. I think she is special. The thing about the Breeders' Cup is you can brag all you want, but when the gate comes open, the separation begins. That is the beauty of the Breeders' Cup. That's why they have it. The good horses, they separate themselves.”

Halladay, unraced since wiring the field in the GI Fourstardave H. at Saratoga Aug. 22, clocked :49.21 (video) for his four-furlong breeze over the main track. It was the third work for Halladay since having to be scratched from the GI Shadwell Mile S. Oct. 3 with a hind-leg infection.

“I was happy we were able to get it in today. The track dried out pretty nicely considering all of the rain we've had,” Pletcher said. “Halladay was a touch keen early on. He went off a little quick but then he relaxed, settled quickly, finished up strong and galloped out well. I was happy with that.”

Also working by her lonesome was GI Juddmonte Spinster S. upsetter Valiance, who stopped the clock in :49 flat (video).

“Valiance maintains form really well. Not only was her work good, but she galloped out well. She seems to be doing as well as she can at the moment,” Pletcher said.