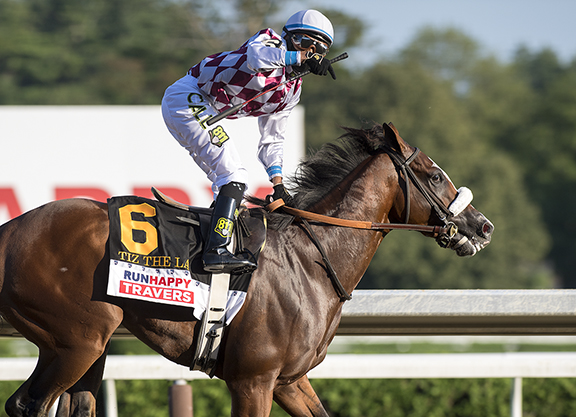 There were just 56 days between Tiz the Law's (Constitution) dazzling sophomore debut in the GIII Holy Bull S. on the first day of February to his next start in the GI Florida Derby. How much could change in that time?

As it turned out, just about everything.

So maybe that's why, during a dark time, this bay colt with the bright, white-blazed face was so easy to cheer for. During uncertain circumstances, the Sackatoga silks with the familiar connections brought a piece of near normalcy to the starting gate.

Even now, as he takes up stud duty at Ashford Stud, Tiz the Law's campaign will long be remembered as one piece of an unforgettable year in racing.

The fact that this horse was owned by a syndicate of racing fans, Wallace said, made his success all the more meaningful.

“Being owned by a syndicate, he was able to touch so many more people,” he said. “We've seen it when some of his previous owners have come to the farm to visit him. He generated a huge amount of excitement and a huge following. Even though they couldn't go to the races and watch him, [fans] will never forget watching the owners celebrate the Travers win at Saratoga.”

Bred by Twin Creeks Farm, Tiz the Law was a $110,000 yearling purchase for Sackatoga's Jack Knowlton at the 2018 Fasig-Tipton Saratoga New York-bred Sale.

After a winning debut and easy four-length romp in the GI Champagne S., the son of Constitution had already caught Ashford's attention.

“Tiz the Law stamped himself as a very exciting prospect early in his 2-year-old season,” Wallace said. “The Champagne is a race that, year after year, stamps itself as a stallion-making race. We know first-hand with the likes of Uncle Mo, Scat Daddy and Practical Joke all having won the Champagne. It separates the wheat from the chaff, so any horse that wins in New York at that time of year, we're certainly looking at.”

Following his definitive wins in the GIII Holy Bull S. and GI Florida Derby, Tiz the Law followed an odd Triple Crown trail as he took on the first leg of the series in a nine-furlong GI Belmont S. When jockey Manny Franco cued him while heading into the long Belmont stretch, the bay shifted gears to blow by his foes and become the first New York-bred to win the Belmont since 1882.

Then came the GI Runhappy Travers S., which was slated to run exactly one year after his winning debut at the Spa in 2019. Sent off as the 1-2 favorite, Tiz the Law raced three wide before pouncing on his tiring rivals at the far turn and geared down in the stretch to win by 5 ½ lengths to John Imbriale's call of, “Here he is, Saratoga's hometown hero, Tiz the Law.”

“Only one horse has gone faster since 1990, and that was Arrogate (Unbridled's Song) five years ago,” Wallace noted of the Travers victory. “It just shows how much ability the horse had-how much raw, natural talent. What made Tiz the Law so great was his huge ability to quicken off a high cruising speed. The Travers was one example of that and the Belmont was another. I think that's the key to any great horse, and it was the key to him.”

Arguments arose as to if this horse would be named a Triple Crown champion if he were to win the next two legs of the series. But the controversy died when Tiz the Law had to settle for second against Bob Baffert's eventual GI Breeders' Cup Classic champion Authentic (Into Mischief) in the Run for the Roses.

After a sixth-place finish in the Classic, Tiz the Law's connections were ready for a comeback in the GI Pegasus World Cup Invitational S. But after an X–ray revealed bone bruising, the decision was made for him to retire.

The four-time Grade I winner arrived at Ashford with earnings of over $2.7 million, running in the money in all but one of his career starts.

“For a very long period of time, he was right at the top of his generation,” Wallace said. “He was New York's home-bred hero and he really captured the hearts and minds of a lot of people in New York in a very troubling year. That's one of the reasons that, as a four-time Grade I winner, he really resonates with a lot of breeders and a lot of fans.”

“It's no secret that Constitution is probably regarded as one of the most promising new sires in the business at the moment,” Wallace said. “Worldwide, he has already sired four Grade I winners, including three from Chile, and Tiz the Law is obviously his marquee horse here. Tiz the Law is a great embodiment of what Constitution has to offer.”

Tiz the Law is out of the Tiznow mare Tizfiz, winner of the 2009 GII San Gorgonio H. and a full-sister to Grade III winner and Grade I-placed Fury Kapcori. Her granddam is a half-sister to Favorite Trick (Phone Trick), who won Horse of the Year honors as a juvenile in 1997.

“It's a family replete with 2-year-old success,” Wallace noted. “Obviously Tiz the Law himself was a very good 2-year-old, so I think it's a pedigree that will offer people a lot of precocity and it will suit a wide array of broodmares here in this country.”

Wallace said the Coolmore team has kept busy since the 4-year-old's arrival as breeders have been out to see the new prospect, who will stand his first season for a $40,000 fee.

“Physically he's all about balance,” he said. “He's an exceptional mover, lots of quality and a lovely nature. A lovely hip and shoulder on him as well. The breeders who have come to see him over the last couple of weeks have been blown away.”

“What makes any horse special is the amount of people that they can bring into the sport,” Wallace said. “This sport, like any sport, needs heroes. We need storylines. Barclay Tagg has been around for a long time and we'll never forget his role with Sackatoga Stables and Funny Cide (Distorted Humor). To come back with the same owner-trainer combination with a New York-bred, I think that really drew people into the sport. He's a stunning individual and we couldn't be prouder to stand him here.”