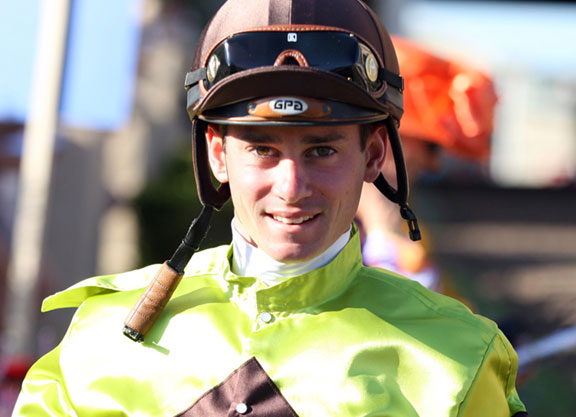 Have saddle, will travel–a well-worn aphorism. But is it a wise one to emulate in this time of the coronavirus?

Within the past week, Flavien Prat, Victor Espinoza, Eduard Rojas Fernandez, Luis Saez and Martin Garcia have all tested positive for the virus–a chain of events that can be traced back to Los Alamitos over the July 4 weekend, said Derek Lawson, Prat's agent. “There's no question that that's where it happened,” he said, of Prat's infection occurring at the Southern California facility.

But against a broader surge in coronavirus infections and hospitalizations in several parts of the country, cautionary voices industry-wide appear to be growing in volume, raising questions about the safety standards racetracks nationwide have instituted to protect the riding community.

A central part of the problem, said Terry Meyocks, Jockeys' Guild president and CEO, is a familiar industry refrain: a fractured set of standards across the country.

“There needs to be more consistency throughout the United States,” said Meyocks. “It's a more fluid situation due to the recent positives.”

A perfect example of that can be found in Southern California. When live racing resumed at Santa Anita, it did so under arguably the strictest protocols of any jockey colony in the U.S.

All riders were tested prior to action, before being quarantined in trailers on site for the duration of the weekend. There were also strict procedures in place to separate the riders and the retinue of front-stretch staff from the backstretch community, including restrictions surrounding saddling horses and attending grooms. Jockeys and their agents were also banned from entering the backstretch during morning training.

“What we did was pretty aggressive,” said Aidan Butler, acting executive director of California racing for The Stronach Group. “It worked pretty well.”

When asked how the rash of positive cases within the Santa Anita backside community factored in, Butler replied that the racetrack is both a training and racing center, and so, it's “common sense” to impose restrictions to separate the backstretch from the front side workers. “If you want to race, you've got to protect the jockeys,” he said.

Del Mar has so far done things differently. Prior to this weekend, Del Mar didn't require that jockeys get tested before riding. That has now changed–before racing resumes this Friday, Del Mar will test all jockeys and jockeys' room personnel.

At the start of the month, Del Mar management touted to the San Diego Union-Tribune a $250,000 investment in COVID-19 safeguards, along with a nine-page opening plan crafted with input from medical experts at nearby Scripps Hospital.

Nevertheless, when it comes to separating the front stretch community from the backstretch, Del Mar appeared to have instituted a looser set of procedures than at Santa Anita, including allowing jockeys and their agents into the Del Mar backstretch in the morning.

The TDN made multiple calls, emails and texts Monday morning to Del Mar management for comment. The only reply we got was from track spokesperson Mac McBride, who explained in an email that track management were busy Monday revising safety plans, but he added that jockeys have now been barred from the backstretch. “Possible we may not allow riders to ship in or out of town,” he wrote.

Some, like Lawson, refuse to point fingers at the tracks. “There's no blame on anybody,” he said. “There's no place that can put somebody in a bubble for time immemorial.”

Still, Meyocks said that Santa Anita's strict protocols, including those to separate the front-side and backstretch communities, provide a gold standard that other tracks should try to emulate, where possible.

“I'm not saying that every track can do that,” Meyocks added, pointing to the associated costs and logistics. “But you've got to hand it to Santa Anita.”

At a minimum, said Meyocks, tracks should insist on the following: better social distancing between race-day workers, routine testing, and more rigorous sanitization of the jocks' room and other congregation points.

“Most of the jocks' rooms are small with 20 jocks on top of each other,” he said. “Find somewhere you can spread them apart and limit exposure.”

There's also the issue of jockeys flying from track-to-track across the country, with trainer Graham Motion telling the TDN Saturday that for the “well-being” of the riders, less travel might be better. “We're putting a lot of pressure on everyone, including the jockeys,” he said.

Motion reiterated those same concerns Monday, adding that some tracks and jurisdictions were doing better than others when it comes to protecting the backstretch community as a whole, not just the jockeys.

“The tracks should be looking after us if they want to keep the game going,” said Motion.

One of the tracks that Motion mentioned favorably was Keeneland, which operated four separate jocks' rooms to keep current riders together, to maximize social distancing, and to limit the contact with jockeys flying in from other parts of the country.

This weekend, California-based jockey Mike Smith is scheduled to fly out to New Jersey to partner the Bob Baffert-trained Authenticity in the latest running of the GI Haskell Invitational S.

According to Dennis Drazin, CEO of Monmouth Park, riders shipping in will be tested and separated from the existing jockey colony at Monmouth, with all current protocols for COVID-19 still in place and applicable to “all jockeys.”

“We have considered all options and submitted detailed protocols for approval by our regulators, who in turn consult with the [Department of Health] and administration,” wrote Drazin, in a text, adding that Monmouth medical director, Dr. Angelo Chinnici, oversees medical protocols at the track. “We try to stress to the jockeys the importance of masks and social distancing.”

Martin Panza, senior vice president of racing operations for the New York Racing Association (NYRA), wrote in a text that he wasn't able to discuss protocols for the upcoming Saratoga meet–which starts this Thursday–as they're “very fluid” at the moment.

“Wish all tracks had been testing,” Panza added.

Motion, however, has a different wish.

“If we had a national body supervising the protocols, we'd be in much better shape, whereas everybody's going about things in their own way, and I think that's putting everybody in an awkward spot,” said Motion. “This just goes to show another chink in our armor.”