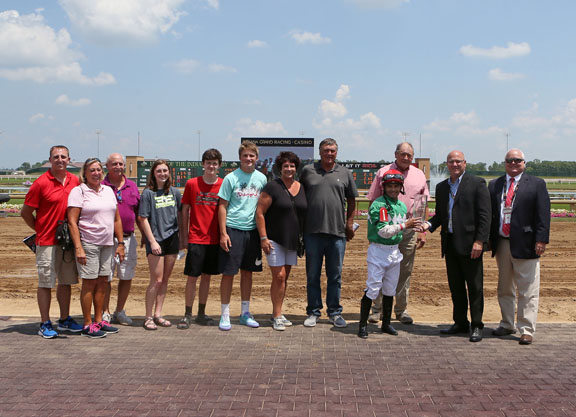 After riding the second race at Keeneland today, where he finished second aboard Fortuna (Medaglia d'Oro), jockey Luis Saez received a positive result back from a COVID-19 test he took on Thursday at Keeneland, and was removed from the remainder of his mounts. The news was confirmed by Keeneland's Vice President and Chief Operating Officer Vince Gabbert.

“Based on the protocols we set up, we had him and several others isolated based on the areas in which they have been riding,” said Gabbert, who explained that Keeneland is currently operating with four jockeys rooms to keep people together who had already been together and to maximize social distancing. “The procedure when someone tests positive is they vacate the premises, and take all of their tack. We had regular cleaning already in place, and there will be some additional cleaning in areas where he might have been. He is off his mounts for the rest of the day, and he'll go into isolation and have to do his followup.”

Gabbert said that Keeneland's four jockeys rooms limits the contact jockeys have with others coming from other parts of the country. “Tomorrow, for example, Mike Smith and Flavien Prat are coming in to ride from California, and are only riding the one day, and they will be separated together. The same goes for jockeys who had been riding in New York and Indiana.”

While Gabbert declined to say what jockeys Saez might have interacted with, he said that everyone with whom the jockey had been in contact had been notified. “We've gone through all of the contact tracing measures, and luckily for the jockeys, their contact is very minimal. We have had testing set up here each morning, so people who are shipping in, trainers, jockeys, have the availability to get testing here at Keeneland. The result usually comes back same day.”

Since Keeneland opened on Wednesday for a five-day summer meeting, Saez has ridden three horses at Keeneland; Fortuna on Friday and Habitus (Kitten's Joy) on Thursday for trainer Graham Motion; and Exult (Noble Mission {GB}) on Thursday for Rodolphe Brisset.

The photo of Saez in the winner's circle after Copper Nickel (Stroll)'s score in Hoosier Breeders Sophomore S. on Wednesday night shows a maskless Saez with 11 others in close proximity in the picture. No one in the photo is wearing a mask.

Graham Motion, who trained two of Saez's mounts at Keeneland this week, said that he had remained at his home base of Fair Hill in Maryland, and had not traveled to Keeneland so had not been in contact with Saez. “The contact my staff had with him was minimal, other than touching his tack,” he said.

Still, Motion raised an alarm about complacency and differing protocols in different parts of the country. “I think in general, it's a sign that we need to run a tighter ship,” he said. “Perhaps everybody has got to stop moving around as much for their own well being. We're putting a lot of pressure on everyone, including the jockeys.”

“There are a lot of complications here,” he said. “But look, we suffer again because we don't have a governing body. Of course everybody is trying to do the right thing, but every track has different protocols.”

Gabbert said Keeneland had set up and followed its protocols, and will continue to make improvements on them for the September sale. “We've had our protocols in place, and we've followed them,” said Gabbert. “Procedurally, I've been pleased. There are a few little tweaks we can make on our set up, but our staff has done a good job putting things in place.”

Saez is the regular rider of Maximum Security (New Year's Day), and was supposed to ride the champion in his first start for Bob Baffert in the GII San Diego H. at Del Mar next Saturday.

Several tracks have put restrictions in place limiting the movement of jockeys riding at their facilities. Patrick McKenna, a spokesman for NYRA, sent the following statement to the TDN.

“NYRA discourages jockeys from riding in other jurisdictions due to the troubling inconsistency of COVID-19 safety protocols in many states around the country. Any jockey traveling out of New York State to ride will be required to provide NYRA with a negative COVID-19 test in order to gain access to NYRA property and resume any and all activities related to morning training or afternoon racing. The COVID-19 test must be administered in New York at the conclusion of the period of travel. This policy has been in place since the resumption of live racing at Belmont Park on June 3.

“NYRA will follow current C.D.C. and New York State Health Department guidance when determining the return of a jockey who has tested positive for COVID-19. This process is often lengthy and generally includes a period of quarantine of varying length depending on the individual case followed by a series of diagnostic tests that rule out any ongoing infection. NYRA will consider allowing a jockey to resume racing or training activities on NYRA property only when his/her physician has provided clearance to do so.”