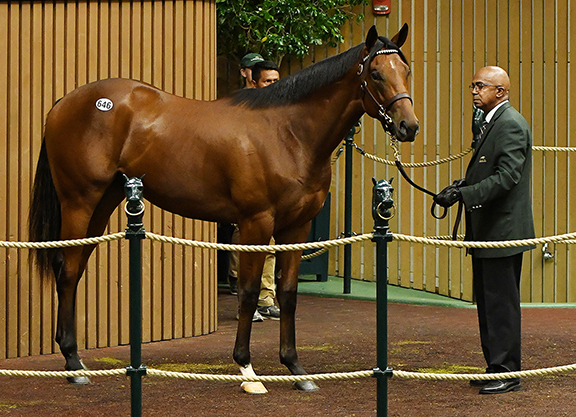 An intriguing cast of sophomore colts seek their diplomas at Fair Grounds Thursday. Frank Fletcher Racing Operations, Inc. paid $500,000 for K C Rocket (Kantharos) at OBSAPR '20 off a powerful :10 flat breeze and strong gallop out before turning him over to Al Stall, Jr. A $75,000 KEENOV weanling and $165,000 KEESEP yearling, the chestnut is out of a Midnight Lute daughter of dual champion Silverbulletday (Silver Deputy). While that Hall of Famer hasn't necessarily had the same success as a broodmare that she did on the track, her daughters have passed on the running gene, notably when matched up with fellow Baffert/Pegram standout Midnight Lute. A pair of half sisters to K C Rocket's dam Illicit Affair have produced GISW Shakin It Up (Midnight Lute) and GSW Govenor Charlie (Midnight Lute), respectively.

David Ingordo and Cherie DeVaux's Tulane Tryst (Into Mischief) figures to take some beating in his second start. The $310,000 KEESEP acquisition earned an 82 Beyer Speed Figure for a debut second over track and trip Jan. 30 behind the Stall-trained He's in Charge (Candy Ride {Arg}).

Bret Calhoun has a pair signed on. Newcomer Mr. Wireless (Dialed In) is half to Ain't No Elmers (Goldencents), who garnered 'TDN Rising Star' status after going two-for-two by daylight here last year for the same barn. She'd go on to finish second in the GIII Miss Preakness S. in October. Calhoun also sends out Tom Durant's $950,000 Keeneland September buy Find New Roads (Quality Road), who is out of a half-sister to the dam 2017 GIII Lecomte S. winner Guest Suite (Quality Road) and from the family of A.P. Indy. The bay gets blinkers this time after checking in sixth as the favorite following a tardy start here Feb. 4.

Brad Cox pupil Colonel Bowman (Curlin) looks to atone after a pair of defeats as the favorite. The Godolphin homebred was second on debut here Jan. 2–one spot ahead of coupled entry-mate Gershwin (Distorted Humor), who came back to graduate next out. Colonel Bowman, meanwhile, checked in two spots behind Tulane Tryst last time. The son of GISW Dubai Escapade (Awesome Again) will shed the blinkers he sported last out.

Robert and Lawana Low homebred Artwork (Munnings) hinted at potential speed when firing a 1:00 flat bullet from the gate here Feb. 24. He is out of a Curlin daughter of the Lows' GISW Capote Belle (Capote). TJCIS PPs