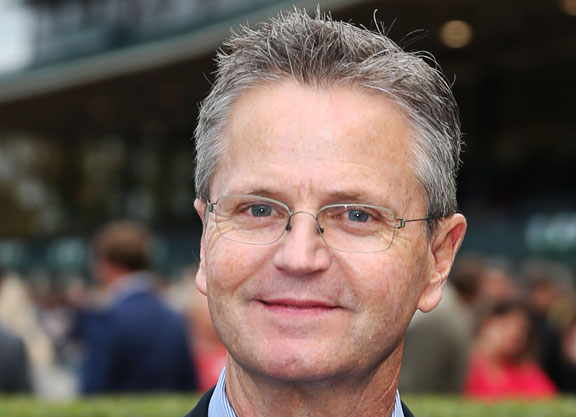 As former stable star and popular GISW Tom's d'Etat (Smart Strike) gets his career at stud underway at WinStar Farm, a pair of flashy 3-year-old maiden winners and an emotional stakes victory have helped propel the 2021 season for veteran trainer Al Stall, Jr.

“Trying to fill the shoes of horses like Blame and Tom's d'Etat are awfully tough,” said Stall, who trained the former to a heart-stopping victory over Zenyatta in the 2010 GI Breeders' Cup Classic.

“When horses like that leave the barn to go to Claiborne Farm and WinStar Farm, you're very happy for the horse that they're going to such a nice place with a potentially good career ahead of them. As far as the void goes, you just keep on getting up every morning and hope that one of the younger horses steps up or an older horse develops late. Hopefully, these two or some others can help fill the void that was left in the barn.”

One of “these two”–Carribean Caper (f, 3, Speightstown–Checkupfromzneckup, by Dixie Union)–kicked off Saturday's loaded, 13-race GII Risen Star S. program at Fair Grounds with a geared-down, eight-length, tour-de-force to earn the 'TDN Rising Star' nod at first asking in the six-furlong opener (video).

The Columbine Stable colorbearer, a $250,000 Keeneland September graduate, was always traveling smartly pressing the early leader after breaking on top, took over as they straightened for home and ran up the score under confident handling in the stretch to win for fun. She earned a very strong 87 Beyer Speed Figure for the effort.

“We always liked her,” Stall said. “She had a respiratory issue at the end of 2020–she was ready to run a month and a half ago or so–but we had to back off and just really try to maintain her. She was really ready to run Saturday and broke so sharp and just laid perfectly and galloped away from them. She was pretty professional, which didn't surprise us because she acted that way all along.”

A first-level allowance contest for straight 3-year-old fillies going seven furlongs on Keeneland's opening day program Apr. 2 could be next.

“She ran awfully fast and we'll give her some time to get over that,” Stall said. “Nothing too dramatic like a stakes race [for her next start]. She's very smart and does everything right. First, we'll just get a little bit more of a foundation underneath her, with hopefully another sprint with a gradual stretchout. Then, we'll see where things land after that.”

He continued, “There's a chance she'll carry her speed. She reminded me of grass from the beginning–I was actually thinking of 5 1/2 [furlongs on grass for her debut]–but I figured she had a really good chance to win on dirt, too. There's a lot of things to look forward to with her.”

The future also looks bright for He's In Charge (c, 3, Candy Ride–Brazen Persuasion, by Indian Charlie), who lit up the tote board at 28-1 with a 91 Beyer Speed Figure at second asking in New Orleans Jan. 30 (video).

Campaigned in partnership by Paul Braverman, Timothy Pinch, Parkland Thoroughbreds and Newport Stables, the $180,000 Keeneland September yearling showed some early interest and faded to eighth–beaten 20 3/4 lengths–in one start at two for trainer Ethan West over the all-weather at Turfway Dec. 11. He's In Charge lived up to his name while adding Lasix in his six-furlong dirt debut for Stall.

The rail-drawn Florida-bred sat just off a hot pace in fourth, was locked and loaded awaiting racing room on the far turn and scraped paint in the stretch with a smart inside run to win going away by 3 1/4 expanding lengths.

“He got down to us and he was in good shape–I'm guessing that he just didn't like the Tapeta,” Stall said.

Stall continued, “His mother was a fast mare that Steve Asmussen had early in her career and I also trained her later. He's also a good athlete, so hopefully the top side will take him a little further. We'd like to find a one other than here at Fair Grounds in the next book for him. He came out of the race in good shape and he's going to have a little breeze this weekend.”

“We're excited about both of them,” Stall said of Carribean Caper and He's In Charge.

The race, of course, is named in honor of Stall's father, the former longtime chairman of the Louisiana Racing Commission and member of the Fair Grounds Hall of Fame who passed away in 2017.

There were few dry eyes in the winner's circle after the result was finally declared official following a stewards' inquiry and a jockey's objection.

“It was great, and being from here, we had the whole family in town,” Stall said.

“We took the picture, then when [Fair Grounds analyst] Joe Kristufek put that camera in front of me, that's when the emotions just exploded. That makes you feel like you're alive though, rather than just being a robot getting up every day training horses. It was really nice and couldn't have been better. Fairytale as it gets, right?”