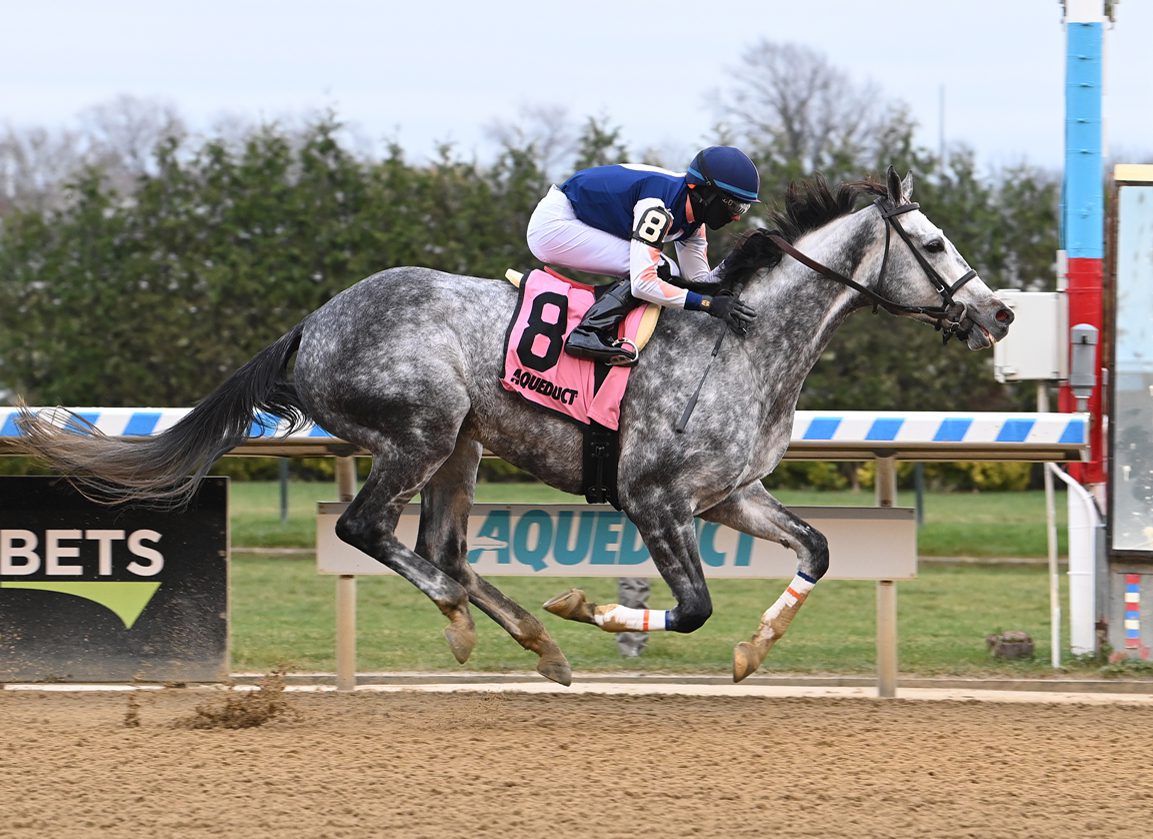 When Silver Seeker (Central Banker) made his second start off a nearly three-year layoff Saturday at Aqueduct, the betting public was skeptical of the Midwest shipper's chances, dismissing him at 19-1 in a second-level allowance/optional claimer for New York-breds.

The price seemed about right if all you had to go on were the gelding's past performances, which showed just a ninth-place November prep at Hawthorne for Gene LaCroix, an obscure-to-horseplayers trainer riding an 0-for-30 losing streak that dated to Sept. 20, 2020.

Bettors might have assessed Silver Seeker's chances more favorably had they been aware that even though LaCroix, 74, is only a hobbyist trainer with a several-horse private stable, he is, by many accounts, considered to be an expert layoff conditioner.

Raised in a horse-centric family with decades of multi-breed experience, LaCroix for the past 20 years has operated LaCroix Training Center in La Grange, Kentucky, alongside his wife, Erin. A bit off the beaten path, their facility is a green, 65-stall spread with a half-mile training track; a tranquil oasis where some of America's top Thoroughbred outfits send horses (including a few Grade I winners) for breaking, legging-up and conditioning.

Likewise, even if they didn't have a wager on him, railbirds might have cheered a little more lustily for Silver Seeker himself if they knew the incredible physical obstacles and setbacks the gelding faced just to make it back to the races on a chilly December afternoon, let alone win by two lengths en route to a $41.40 upset.

“This whole thing has been a challenge to bring this horse back, to give him a chance to see if he still had the heart and the will to do it,” Gene LaCroix told TDN by phone several hours after the Dec. 10 win. “Our operation, LaCroix rehab, is well known. But Erin and I are like amateur trainers. We don't do it professionally. We just have a few horses. We're pretty much out of it except for this silver horse. And it's just been such a pleasure to see him come along and how good he looked. He's a big, handsome horse.”

LaCroix grew up accompanying his father, Dr. Eugene E. LaCroix, to the backside of Turf Paradise in Phoenix, Arizona, in the 1950s and 60s. Dr. LaCroix was one of the pioneers of Arabian racing on a pari-mutuel basis, but like his son, his horsemanship was not confined to one specific breed.

The younger Gene was an innovator in Arabian stallion syndication by the 1980s, and prior to focusing their attention on Thoroughbreds, he and Erin enjoyed successful careers in the show horse industry, earning more than 100 U.S. National Championships and two lifetime achievement awards.

After moving to Kentucky, in 2003 the LaCroixes started a rehabilitation and lay-up program for Thoroughbreds at their farm, handling all aspects of the operation, from business management to equine care. Because they live on the property, they are responsible for all the late barn inspections before turning in themselves, although the operation is rounded out by longtime, experienced staffers.

Over the past two decades, trainers and owners such as Tom Amoss, Tim Glyshaw, Maggi Moss, and Padua Stables have utilized the LaCroixes' services. The farm's website even includes a testimonial from Dr. Larry Bramlage, one of the most respected equine surgeons in America, alongside words of praise from other notable veterinarians.

In 2008, Gene became a licensed trainer. But the scope of his own stable has generally been limited to buying a few yearlings, training them. and then either selling them at auction or racing them. Over 15 years, he's only had 127 starters, and just five this year prior to Saturday's race.

Shortly after Silver Seeker was foaled on May 1, 2016, Gene and Erin entered into a partnership on him with breeder Patrick Davis and a third investor.

“The original plan was to send him to an auction in New York,” Gene LaCroix said. “He came in here as a long-legged, shaggy weanling. And when it came time for the X-rays, they didn't come out good. So we decided to scrap the New York auction and put him in Keeneland with a modest reserve.”

There were no takers, and Silver Seeker RNA'd for $7,500 as a yearling.

It turned out that Silver Seeker had developed osteochondrosis in his left stifle. The plan then switched to letting it heal before trying to race against New York-breds.

But, as LaCroix explained, “to make a long story short, we decided to get out of the partnership because we didn't want to be a one-third owner and paying the expense of sending him to another trainer in New York,” when the horse might not be good enough to win there and they had their own training facility in Kentucky.

“But,” LaCroix added, “we suggested that we would take the gamble if we owned 100% of him. And they took us up on it.”

So Gene and Erin bought out the other partners, and were encouraged when Silver Seeker breezed fast as 2-year-old. Then the stifle started bothering him again and he underwent surgery to try and fix it.

That pushed the gelding's debut to age three, when LaCroix entered Silver Seeker in a 5 1/2-furlong maiden special weight at Indiana Grand after training him on the farm for his debut.

The LaCroixes thought Silver Seeker might blossom into a grass router, and they considered sending him to New York. But they first wanted to try him on turf closer to home. A month after his debut upset, the gelding again ran at Indy, but he had trouble on the turns before finishing a credible fourth.

But he came out of that race with a condylar bruise on his left hind, LaCroix said. “They suggested we put a screw in it. And that took another two or three months.”

“So I felt pretty good, and we said, 'Okay, he's ready for New York,'” LaCroix recalled. “And we took him to New York and he won that race,” a one-other-than, state-bred allowance over seven furlongs in the slop at Aqueduct on Dec. 31, 2019, this time at 9-1 odds.

“Then in the process of bringing him back, he got a bow in his right front,” LaCroix said. “So we took a year, brought him back slow, just like they told us to do. And one breeze into it, an easy breeze, he showed he was going to tear again. It was minimal, but they thought it was a different spot.”

This meant another entire year off. The list of the veterinarians that the LaCroixes consulted reads like a Who's Who of Kentucky equine practitioners. The gray would eventually miss his entire 4-, 5-, and almost all of his 6-year-old seasons.

“We figured out a plan of bringing him back with a lot of warm-up,” LaCroix said. “Every day, before he went to the track, he went to the exerciser machine for 20 minutes. And he learned to lope at first, not gallop. He'd do a half-mile lope after the jog, and then he would start his gallop. And we built that gallop up starting by getting a mile slow, and then gradually bringing him up.

“My wife is listed as the owner,” LaCroix continued. “But she's really the co-trainer. She's been his caretaker. I go over him too, but it's been a team effort. And we just had so much hope with this horse, that if we could rehab him properly, he could come back.”

“With all the icing and everything else, we never saw a problem,” LaCroix said.

By the autumn of 2022, he believed that “no horseman could look at either leg and tell which one [had bowed].”

Trouble was, the LaCroixes couldn't find a racing commission vet who would do so much as even glance at Silver Seeker because of the huge gap in his racing career. Their private vets vouched for the gelding's soundness, but the regulatory vets wouldn't budge.

“I can't tell you the effort we went through to get him qualified to race because of the new rule changes,” LaCroix said. “We couldn't get the state vets in Kentucky, Ohio or Indiana to even give him a work to evaluate, pass, or fail him. They wouldn't even look at him.”

Finally, LaCroix said, “Illinois said they would do that. He went up to Hawthorne and had a bullet work, passed with flying colors. So that got him off the vet's list to be eligible to enter.”

Although they still wanted to race him for New York-bred purses, the LaCroixes figured–just like before–that sticking closer to home would be the more prudent first step. Since he worked so well up in Chicago, they entered him at Hawthorne on Nov. 6, 2022, choosing not to run for a tag in an optional $40,000 claiming sprint over six furlongs.

Silver Seeker drew post 10 and went off at 8-1 odds. “He'd never been in an outside post, and the track was lightning fast,” LaCroix explained. “He gained from ninth to fourth, and then he just tired. It made us wonder if it was going to affect him mentally, because it wasn't his fault coming off a 34-month layoff.”

Even if they weren't sure about that potential mental duress, the LaCroixes were certain Silver Seeker was physically ready for a New York race. When the Dec. 10 spot came up in the condition book, Erin, her sister, a groom, and a driver loaded the gray gelding on a van and pointed it 750 miles east to Aqueduct.

“One of us had to stay at the farm,” Gene LaCroix said. “I was there the last time he went to New York, so she went this time. And that was the appropriate way, because Erin has always been more involved in his caretaking.”

Gene watched Silver Seeker's pace-pressing victory at home in Kentucky on TV. Erin told TDN she was “screaming her lungs out” at the rail in New York. The 1:23.99 winning time for seven furlongs equated to a 90 Beyer Speed Figure, a career best for the gelding.

“This horse is very special,” Erin LaCroix said while preparing for the 12-hour ride home. “He's been with us since he was eight months old. And to see him come back like that, he's just a special horse. He is very classy. It's amazing how smart he is. Because he knows what he needs to do to get the job done, and he loves it.”

And how did Silver Seeker come out of the win that ran his lifetime record to 4-for-6 and pushed the one-time $7,500 RNA's purse earnings above the six-figure mark?

“He looks great,” Erin LaCroix said. “Everything's tight. He's happy. He knows he did a good job. He ate all his sweet potatoes and peppermints.”