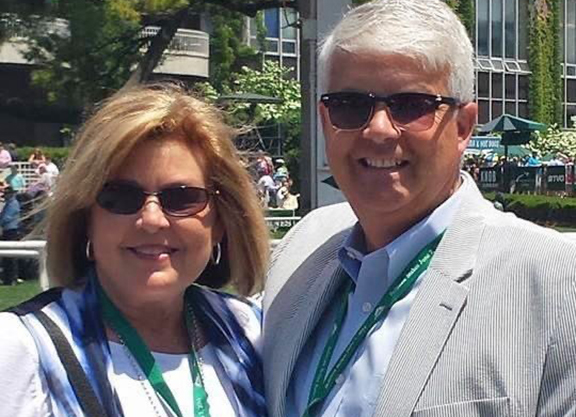 Selling Thoroughbred horses online has never quite caught on in the U.S. as buyers and their advisors are obviously reluctant to purchase a horse they cannot examine in person. But a West Virginia-based auction company is forging ahead with an ambitious online sale later this month, its owners confident that Thoroughbred racing is ready to accept the online marketplace.

“In 2000, if you asked me if this is going to work I would have said no,” said Tim Jennings, who runs ThoroughbredAuctions.com with his wife, Cathy. “I just didn’t think people would buy them without looking at them or running their hand down the horse’s legs. That’s not the case anymore. Ready or not, the way you buy and sell is changing.”

The viability of online auctions will be put to a good test when the ThoroughbredAuctions.com mixed sale closes May 27. With the coronavirus causing the cancellation or postponement of some traditional live sales and with buyers either unable or reluctant to travel because of health concerns, there is an opening for online auctions that has never before existed.

Jennings, who also owns the company SportHorseAuctions.com, said there was a major shift in the sale of sport horses after the 2008 financial crisis. Sellers were looking to save money and move horses fast and found that selling horses online was a practical alternative to a traditional sale.

“We sold 3,200 horses around the country in live auctions in 2007 and by 2011 it was down to 1,485,” Jennings said. “To sell their horses, they were using listing sites or Facebook. We had to make the shift because our customers had shifted. The coronavirus is going to have a similar impact on how people buy Thoroughbreds.”

With Jennings’s companies putting more and more emphasis on online sales, he was picked by the U.S. Marshals Service to sell the many horses owned by Rita Crundwell. The comptroller of Dixon, Illinois, she was accused of obtaining more than $53 million in city funds to support a lavish lifestyle that included owning more than 150 quarter horses.

“It was a really big deal,” Jennings said. “Everybody said the online part of it wouldn’t work and it worked best. We sold 80 of the horses online. It was the largest liquidation in the history of the U.S. Marshals Service.”

“We just have to dig in and continue to do it,” he said.

The May sale will be the next step in the process. It costs $400 to enter a horse and the company’s commission is 8%. There is no commission if the horse does not sell. To potential sellers, Jennings has been pitching the fact that there are no costs involved in shipping a horse to a sale, that his site reaches far more people than a traditional sale can and that the horse is up for sale for more than a two-minute window. Like eBay, ThoroughbredAuctions.com, also has a “make-an-offer” feature whereby buyers can acquire a horse before the auction begins.

With the sale set to begin May 20, a handful of horses are already listed in the online catalogue, and the majority are modestly bred 2-year-olds or yearlings. Sellers are asked to provide as much information as possible on the horses, including x-rays, the results of a basic veterinary exam and walk videos. For now, Jennings’s market appears to be those who are looking for regional horses.

“What we are seeing so far is more young stock than broodmares,” he said. “But it’s a learning process. We have watched it mature and change with sport horses over the last eight years and I think that’s what we will see here as people get more used to it.”

Jennings is also planning on posting horses online between auctions, giving an owner a chance to sell at a point where the price is likely to be near its peak.

“Say you have a mare in the field, a half-sister to a filly who jumps up and wins a Grade II,” he said. “The sharks start feeding and all the agents are calling. You are at their mercy. You could do a one-horse auction for that half-sister and it is done. That is so much easier than having to deal with all the agents. Same thing if you own a mare that just won a Grade II and it is time to cash in. It can work.”

While Jennings would like to see his website ultimately compete with the major live sales, like Keeneland and Fasig-Tipton, he’s realistic enough to know that is not going to happen, at least not overnight. It’s more likely that the next many ThoroughbredAuctions.com sales will feature horses that appeal to a regional market and aren’t ordinarily available at the major sales.

“This is the future. There’s no question about it,” he said. “The market reach is so much better. Is it going to replace Books 1 through 4 at Keeneland? Probably not. But there are people, the ones who might be looking to buy a broodmare for $7,500, who are likely to have work to do at their farms or at their jobs and don’t have time to park themselves at Keeneland for four days.”

But Jennings sees online auctions continuing to grow. Another company, the Australian-based firm Bloodstockauction.com, is also trying to break into the sales market here and launched its first ever U.S. auction earlier this month. Both companies are banking on more and more people growing comfortable with the concept of online sales.

“One of our employees who has worked for us at our live auctions for a long time has the best answer to all those who say this will never work,” Jennings said. “He says making this work to our generation may be a tough sell. But, then, take the next generation coming up. They buy everything from their toilet paper to their townhouse online. They’re just used to it. They shop on eBay, they shop on Amazon. As this way of buying things becomes more prevalent across demographics, sales like ours are going to reach even deeper. It’s a generation that buys everything online and there’s no reason that won’t include horses.”