Home » Archive » Shared News » This Side Up: A Daring Stand For Gender Equality 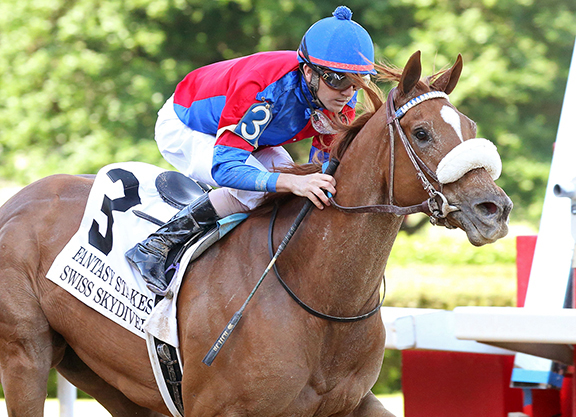 In theory, all horses are created equal. Then stuff happens. Between their genes, accidents of life, and the designs of those who raise and train them, they develop strengths and flaws. And we end up, like George Orwell's pigs, with “some animals more equal than others.”

After hundreds of years of observation, however, we have concluded that one half of the breed is born with an athletic superiority over the other. And we duly grant Swiss Skydiver (Daredevil) a five-pound concession for daring to square up to males in the GII Toyota Blue Grass S. Saturday.

Her participation redeems afresh a race that had lost its bearings twice over: first when Keeneland's spring meet was called off; and then when Maxfield (Street Sense), having promised to turn the revised Classic calendar to opportunist and thrilling advantage, glumly returned to the sidelines.

The first six names engraved on the Blue Grass roll of honor include Bull Lea, Bimelech and Shut Out, while a Round Table or Northern Dancer or Spectacular Bid would reliably maintain standards every few years thereafter. But the race palpably suffered from that experiment with a synthetic surface which–whatever its benefits–was perceived to invalidate its purpose as a rehearsal for a GI Kentucky Derby on dirt. Three years ago, the Blue Grass was relegated to Grade II level.

Good Magic (Curlin) soon initiated a revival, however, when beaten at Churchill only by a Triple Crown winner; and last Saturday the 2019 winner, Vekoma (Candy Ride {Arg}), reiterated his elite caliber in the GI Met Mile. The boldness of the Swiss Skydiver team, then, duly completes a good week for this historic prize.

With a GI Kentucky Oaks gate long secured, trainer Kenny McPeek and owner Peter Callahan have asked themselves how her world might look if she also had 100 starting points for the Derby. In partly attributing the decision to the fact that he already had Envoutante (Uncle Mo) for the GI Central Bank Ashland S., McPeek will have made some people wonder how patrons of bigger barns reconcile themselves to horses in different ownership being “socially distanced” in this way. But McPeek is always animated sooner by adventure than petty strike-rates and, once the idea was floated, it always seemed likely that Swiss Skydiver would try to add an audacious new chapter to what is already a remarkable tale. When she first blossomed in the spring, remember, McPeek gave earnest consideration to filling the Oaks void by shipping for a Classic in Newmarket instead.

Thinking big, paradoxically enough, means postponing Swiss Skydiver's first crack at a Grade I. The butterfly first emerged from her chrysalis with a GII Gulfstream Park Oaks success that was widely credited, at the time, to her control of slack fractions; she then won a Grade III race-Oaklawn's Fantasy S.–overloaded by the compression of national opportunity in Hot Springs; and saw off just three pursuers in the GII Santa Anita Oaks. But there's no doubt that success here would do much to illuminate this bleakest of seasons, setting up either a showdown with the lightning bolt Gamine (Into Mischief) in the Oaks; or a bid to emulate Winning Colors, Genuine Risk and Regret in the Derby.

Either would represent a remarkable prospect for a filly McPeek found for $35,000 as Hip 2997 at Keeneland September and must be causing fresh excitement for the Idaho gentlemen who managed to persuade the purchasers of her dam Expo Gold (Johannesburg)–for just $15,000 at the CTBA January Sale last year–to take a modest profit in a private sale. TDN recently featured how one of them, Var Reeve, cherishes the mare as a memorial to his mentor in this business, Clay Murdock, the Rancho San Miguel manager whose premature death last September so grieved the Californian bloodstock community. Expo Gold is still only 12 so, with luck, this legacy will only grow richer.

Nor, perhaps, will she prove the only case of sellers' remorse. Daredevil never really built on the impression he made winning the GI Champagne S. on his second start, when clearly at home on the slop, but he has a good pedigree and WinStar put Expo Gold into both his opening books. But while his third season was actually his busiest, with 140 mares, his abandonment last year was jaw-dropping even by the notoriously puerile standards of commercial breeders who dread nothing so much as a stallion about to demonstrate whether or not his stock can actually run. He was dignified with a grand total of 21 mares.

So when Daredevil mustered no more than 13 juvenile winners from last year, that was that. By the time his second foal out of Expo Gold reached Keeneland in September, Southern Racing were able to buy Swiss Skydiver's young brother for just $4,000. In November it was announced that Daredevil was on his way to Turkey.

But Swiss Skydiver is not his only parting shot. One of his sons, a $30,000 yearling last fall, was pinhooked for $400,000 at OBS March; and earlier this week Shedaresthedevil won her second graded stakes in the GIII Indiana Oaks.

Daredevil would hardly be the first exported stallion to leave a rebuke or two among his indigenous stock. And you can't win them all. WinStar made a terrific signing this week in Tom's D'Etat (Smart Strike), a top-class racehorse whose graded stakes-placed dam is by Giant's Causeway out of a sister to Candy Ride (Arg).

For Daredevil himself, meanwhile, fulfilment may yet await if he fares as well in Turkey as Expo Gold's damsire, Strike the Gold–still the leading active stallion there when he died at 23.

Strike the Gold remains the last Blue Grass winner to follow up in the Derby. If Expo Gold's daughter were to menace that barren streak, on a card also containing three Grade Is confined to females, then Keeneland will have staged a Ladies' Day with barely a frock in the house.