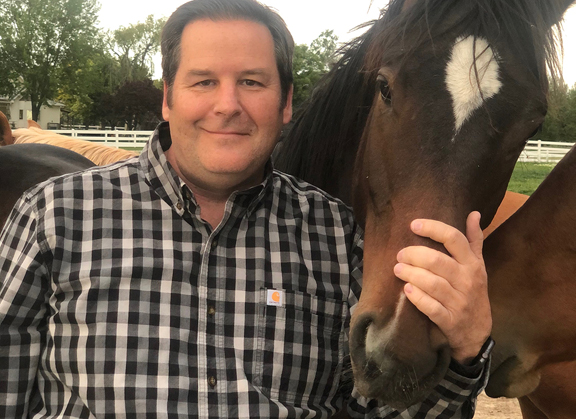 Var Reeve, who owns Expo Gold, at his farm in Idaho this week. | Courtesy Var Reeve

As we all know, especially right now, life will sometimes present challenges so terrible that the racetrack can be made to seem a pretty frivolous place. Yet there are also times when only a horse can kindle consolation from the embers of disaster.

Clay Murdock was 58 when he died in his sleep last September. The general manager of Rancho San Miguel in California had just sealed a deal for the Northern Hemisphere breeding rights to Sir Prancealot (Ire) (Tamayuz {GB}), and was buzzing for the future. His loss, out of a clear blue sky, left his many friends in the West Coast's racing and breeding fraternity numb with grief.

One of those hit hardest was Var Reeve. They spoke most days, including on what turned out to be Murdock's last evening. Two fillies had just arrived at Reeve's place in Idaho: one that Murdock had picked up cheaply after she failed to meet her reserve at a sale in Seattle a few days previously; and another that he had bred himself, and reckoned a better prospect than the market would perceive. Murdock cut his friend a deal for the pair, and their arrival prompted a flurry of texts and calls.

In their last conversation, a propos of nothing, Murdock suddenly brought up a mare Reeve had acquired privately that spring–only his second purchase, in fact, after resolving to tune out from a thriving but hectic business by renewing an old interest in Thoroughbreds.

“You know, Var, I just have this feeling about that mare you got, Expo Gold,” Murdock said. “I think she really could be something.”

It's only now, looking back, that Reeve can hear something different in the tone of that stray remark. And, given everything that has happened since, he cannot resist a sense that Murdock's benign intervention has somehow extended beyond the grave.

Destiny, after all, had hesitated before bringing Expo Gold into the ownership of Reeve and partners Chad Moffatt and Stan Ray, both bloodstock novices. Moffatt and Reeve are in business together, at Boise Mobile Equipment, manufacturing wildland fire-trucks; and the pair agreed a budget of $20,000 when dipping their toes into the CTBA's January Mixed Sale last year.

Murdock had introduced Reeve to Adrian Gonzalez of Checkmate Thoroughbreds, who was consigning a couple of attractive mares to the auction. (Gonzalez was also instrumental, incidentally, in the Sir Prancealot deal.) One of these was as early as Hip 5, and Reeve pounced for $7,500. When it came to Hip 37, Expo Gold, Reeve stuck scrupulously to the agreement: the moment she passed $12,500, they were out of the reckoning. That left her to inch past her reserve at $15,000, sold to Blue Chip Thoroughbreds.

But Reeve couldn't get this pretty lady out of his head. She was an 11-year-old daughter of Johannesburg, out of a graded-stakes placed mare, and had won two of five starts. Both her first two foals had won; there were fillies by Verrazano and Daredevil in training; and she was carrying a Danzing Candy foal (with a complimentary breed-back option).

With his neighbor Stan Ray having meanwhile come on board, Reeve decided to approach Steve McPherson of Blue Chip Thoroughbreds and ask about a private resale.

“I should have just kept going at the sale, because I wanted her really bad,” Reeve recalls. “But I was trying to respect my partner, by only spending $20,000 total for whatever we were buying. Anyway I ended up with this 'non-buyer's remorse', and just kept pestering him to sell me the mare.”

He appears to have made himself quite a nuisance, over the next three months. McPherson resisted at first, noting that Expo Gold had proved capable of breeding a marketable animal: the Verrazano filly, when pinhooked to OBS the previous April, had advanced her $100,000 yearling tag to $275,000. In the end, however, Blue Chip agreed to take a modest profit.

Even by the time of that last conversation with Murdock, things had started to happen. The Verrazano filly, as Miss Hot Legs, won a maiden at Santa Anita in June. She has since added a black-type placing to the page–but it has been Expo Gold's next foal, the Daredevil filly, who has really vindicated Murdock's prophecy.

Acquired as a yearling by Kenny McPeek, for $35,000 at Keeneland September, she surfaced at Churchill last November to win handily on debut. Caught late when turned round for an allowance race a couple of weeks later, she was then fifth when tried at black-type level next time, but only beaten noses and necks. A Grade II podium in the Rachel Alexandra S. looked a real bonus, but it turned out that Swiss Skydiver was only just getting started.

True, her all-the-way success in the GII Gulfstream Park Oaks was widely attributed to her control of leisurely fractions–but then came the breakout. Though formally dropped a tier for the GIII Fantasy S. at Oaklawn, the curtailed springtime program meant that she actually found herself against some elite fillies. She stalked one of them, the odds-on Venetian Harbor (Munnings), before engaging in the stretch: as she asserted, going away by 2 1/2 lengths, the runner-up pulled nearly 11 lengths clear of the third. Swiss Skydiver now stands top of Bill Finley's TDN Kentucky Oaks Top 10 and, with 210 starting points already, may meanwhile be given her first crack at a Classic in an adventurous raid on the G1 Qipco 1,000 Guineas in Britain.

Reeve watched the Gulfstream Oaks with his family at home. “I've got five kids and they were all just laughing at the way I was screaming, like I could make something happen through the television,” he recalls. “But the next time I was just sitting there by myself, and wasn't yelling at all. For some reason, I just had this really good feeling with how she was going. If she was really all that Kenny had talked about her being, and wanting more distance, then she probably had a good shot because those were pretty fast fractions. When she did what she did, my cell phone just started blowing up. Everybody was texting, calling, just going crazy with jubilation.”

Inlaid in the euphoria, however, remained a lingering ache. Reeve casts his mind back 12 or 13 years to the day he met Murdock, himself an Idaho native, when visiting the Tree Top Ranch of Larry and Marianne Williams. There was an instant rapport.

“It happened to be a day he was there, they were clients of Rancho San Miguel, and it was close to a little farm I had and I was just curious to look at their horses,” Reeve recalls. “So we met and it just took off from there. We were members of the same faith, so we had that connection going on, but Clay was just one of the sweetest guys you'd ever meet. You just don't run across people anymore that are so polite, so nice. Everybody seems too busy to remember that we should start with those things.”

Reeve's love of the horse goes back to a boyhood in rural California, and days at Hollywood Park and Santa Anita with his grandfather; and he had raced a few horses in partnership until the downturn. BME, acquired in 2014, would then demand his attention and resources for a few years: its output has soared from six trucks per annum to 200-plus. But while the business duly remains thirsty for cash, it has also generated both a need and the means to unwind a little, too. So it was, having hooked back up with Murdock, that Reeve became intrigued by the possibility of breeding.

There's no mistaking the passion that has developed over the 18 months since. Reeve calls it “a disease,” having quickly expanded the broodmare band to a dozen from those first two acorns in the Checkmate consignment last January. Six of them will take up seasons to Sir Prancealot, joining the syndicate having been one of the last things Reeve did with Murdock.

“Yeah, I've got it bad,” Reeve says with a laugh. “But it's the biggest stress-reliever for me, after work, just to go out and see those babies: they all have their own personalities, and they're all such fun. As soon as the mares pass their 45 days, we bring them to Idaho and then we raise them here.”

Expo Gold herself is boarding with Liam Benson at Emerald Edge Farm in Kentucky. Unfortunately she absorbed after being bred back to Danzing Candy, but Reeve thinks the world of their yearling colt; and she has now been covered by Catholic Boy, maintaining the More Than Ready connection after Verrazano and Daredevil.

Whatever happens from here, Reeve and his partners are enjoying the ride. “We don't even know how lucky we are,” he declares. “I keep telling Stan, 'This just doesn't happen.' The yearling is absolutely gorgeous. We're stupid lucky.”

It has been such a surreal spring; but now in a good way, too. Certainly those masks, mandatory at their manufacturing facilities, won't have stopped the smiles shining through for Reeve and Moffatt.

As it happens, BME has been able to continue production as supplier of such essential equipment to the likes of the U.S. Forest Service and Cal Fire. (To maintain distancing, manufacturing has been divided into 5 a.m. and 2:30 p.m. shifts.) Because before the pandemic, lest we forget, wildfires appeared one of the gravest challenges facing our parched planet.

It's a paradox for Reeves that even such black clouds have turned out to have a silver lining, in Expo Gold. But he remembers a similar dilemma in his very first job out of college, for a company that made automatic covers for swimming pools. There would always be a spike in local demand whenever a child drowned, and Reeve puzzled with himself over the ethics of profiting from tragedy.

“But those safety covers prevented more drownings,” he reasons. “So though only required because of something truly terrible, it was a good and necessary service we were providing. And there are some parallels in these horrendous wildfires. It's devastating even driving through Idaho to see these forests that have burned. But again, there's a necessity to be met. We're building equipment that protects people and property.

“I've heard all the arguments about land management, about global warming, and honestly I'm not smart enough to know what it is. I do know that I can't stop world pollution. We can certainly do things here in our facility to keep from being polluters, which we do. But the only thing I can add to the equation is to build the very best fire-truck we can, and offer the very best value to anybody who needs one.”

And Reeve, as a result, has been able not only to renew his first love–of the horse–but also to savour the legacy that honors a lost friend. There's nothing more harrowing than the sudden and premature loss of loved ones, whether by fire or water or some unsuspected health problem. And nothing will change that. But sometimes a phoenix, of sorts, may arise from the flames.

“Things were going so well for Clay,” Reeve recalls. “He was losing weight, getting in shape, and absolutely over-the-moon excited about Sir Prancealot and what he thought that horse could do for California racing.

“And, for me, he was a big part of my coming back to horses, first of all; but also the advisor, going forward, on what to do. Now I'm left just crossing my fingers that some good stuff will happen. And, so far, we've been blessed. He must be doing something from the next life to help me in this one. I don't know what the explanation could be, if he doesn't have some hand in it.”