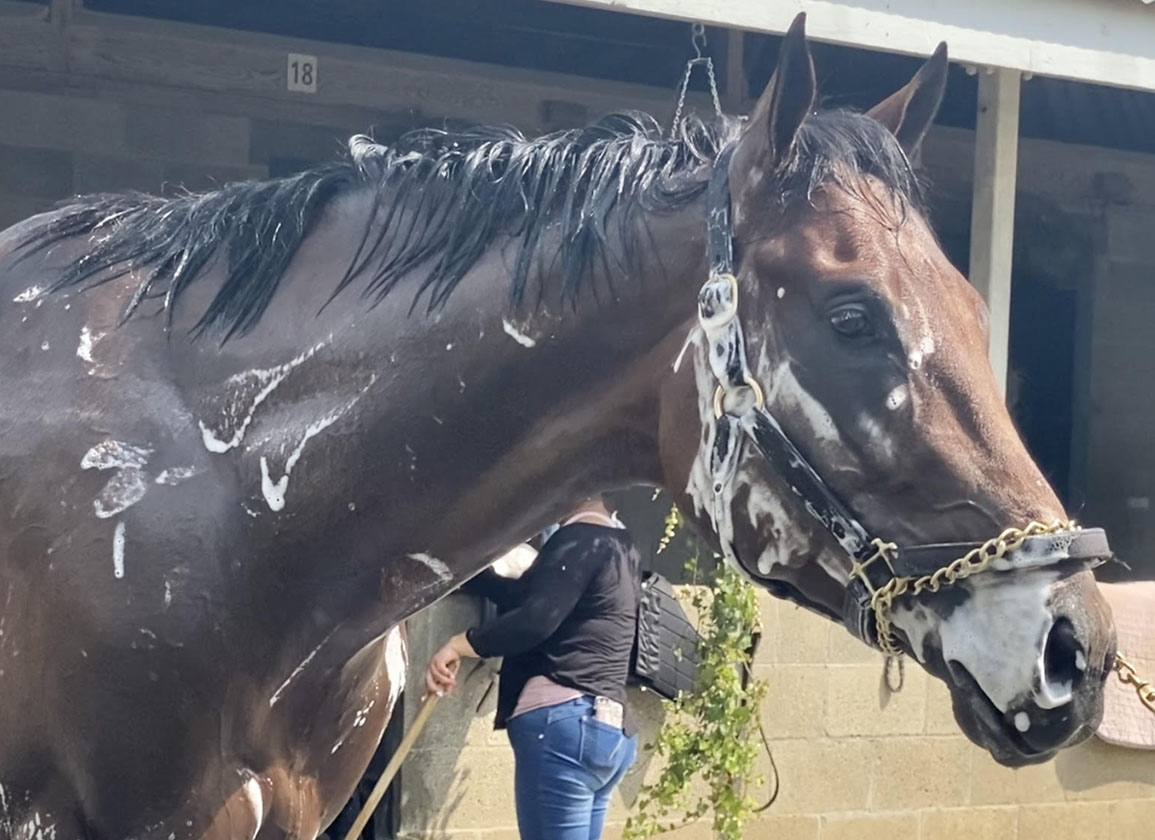 Golden Pal enjoying bath time Monday morning at Keeneland. See our visit with the son of Uncle Mo and trainer Wesley Ward below.

Coming off a dominating performance in the GIII Quick Call S. at Saratoga, 2020 GI Breeders' Cup Juvenile Turf Sprint champion Golden Pal is pointing towards the G1 Nunthorpe S. on Aug. 20. Trainer Wesley Ward oversaw the 3-year-old son of Uncle Mo's training at Keeneland early this week as the colt prepares for a second trip overseas after a close second last year at Ascot in the G2 Norfolk S.

“I think he's really going to move forward fitness-wise from [the Quick Call] to the race in York,” Ward said on Monday morning. “We're going to take him up to Arlington Park and breeze him this Saturday. He'll stay there for a week and breeze the following Saturday there and then we'll have one last breeze before he gets on the plane to go to England.”

“Hopefully the third time is the charm,” Ward said with a chuckle.

The conditioner has all the faith in the world in his fleet-footed sprinter. His belief in Golden Pal's ability has been strong since he first laid eyes on the colt at the 2019 Keeneland September Yearling Sale.

“Ben McElroy short lists for me at the Keeneland sales and he picked out this colt and a few others,” Ward recalled. “When we want to the barn and I took a look at this guy, I just fell in love with him. I told McElroy that this was my pick of the sale.”

But then Golden Pal, the son of 11-time stakes winner and 2015 GI Breeders' Cup Turf Sprint runner-up Lady Shipman (Midshipman), failed to hit his reserve when the hammered dropped for $325,0000.

Luckily, breeder Randy Lowe had noticed Ward hovering around the Taylor Made consignment before the colt had gone through the ring.

“He knew how fond I was of him and so fortunately, he gave him to me to train,” Ward said. 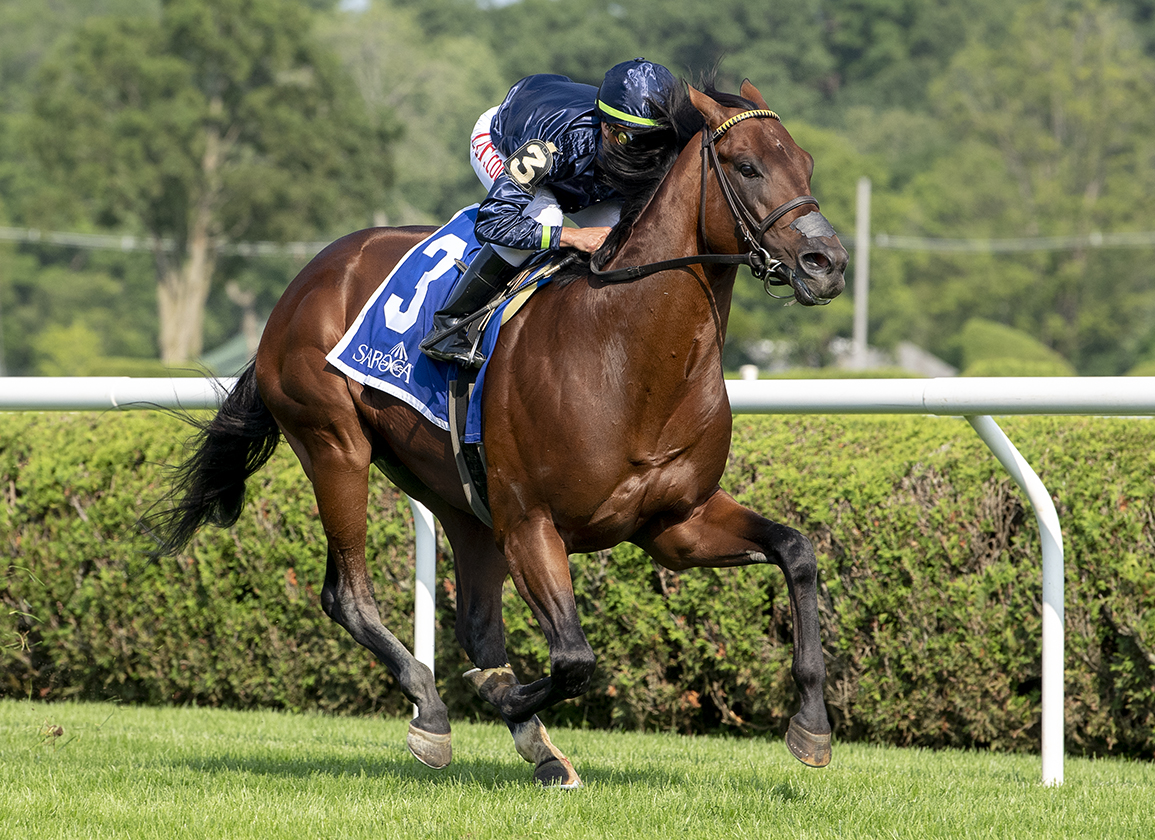 “You could tell in just the first months of galloping that he was an extreme athlete,” Ward said. “He was just very quick and agile on his feet and a very intelligent horse as well. Everything we taught him, he took to within the first few days. He came around a lot faster than the other colts. When we breezed him the first time, everything that I thought he would do, he did. It was just a question of keeping him sound and keeping him on a direct path to the races.”

Ward's plan hit a snag when Golden Pal shipped from Miami to Keeneland early last year in preparation to make his debut at Keeneland's annual spring meet, only to find out soon after that the races were cancelled due to COVID.

“Here I had a horse that was starting to climatize to the cooler temperatures and we had to double back around and bring him back to Miami, which isn't something I like to do,” Ward explained.

Despite the setback, Golden Pal made his debut on schedule in April at Gulfstream, going four and a half furlongs on the dirt.

“When Tyler Gaffalione came into the paddock, I was just so excited for this horse and I told him, 'Man, I think this is going to end up being one of the best horses I ever train,'” Ward said. “I think he's heard that story a time or two from a few other trainers too.”

But after Golden Pal sprinted to the early lead and ticked off a :21.58 opening quarter, he had to settle for a game second.

“He ran a great race but that first quarter mile got us,” Ward recalled. “But by seeing the race visually, I was very proud of him and I knew what I had. So we went forward with our plan to go to Ascot.”

Again in the G2 Norfolk S. at Ascot, early speed got the best of the Florida-bred juvenile as he finished second to The Lir Jet (Ire) (Prince of Lir {Ire}).

“He just moved a little too quickly and the horse was a little unseasoned,” Ward said. “Otherwise, I think he'd be undefeated today.”

All the pieces came together, however, in the later half of the bay colt's juvenile season as he finally made it to the winner's circle off a 3 ½-length score in the Skidmore S. at Saratoga before claiming the Juvenile Turf Sprint as the 4-5 favorite.

While the plan was set soon afterwards for the champion to target the G1 King's Stand S. at Royal Ascot, an ankle chip forced him to postpone the start of his 2021 campaign for surgery.

Less than a month before his eventual return in the Quick Call, Golden Pal was acquired from his breeder by Mrs. John Magnier, Michael Tabor, Derrick Smith and Westerberg. 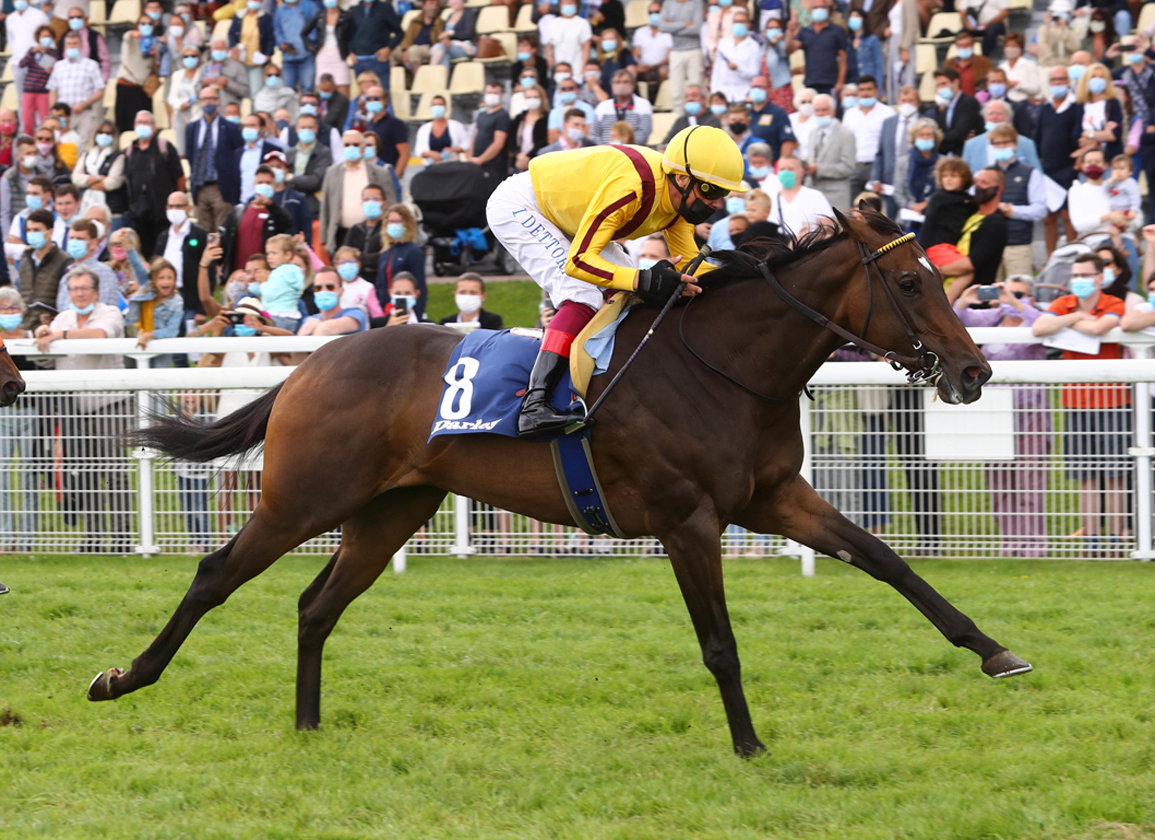 After Golden Pal's impressive score at the Spa, Ward said he believes the probable future Coolmore stallion is in prime condition to show off a new level of talent as he continues through his sophomore campaign.

“To look at him, he's not a big, heavy colt,” he said. “He's everything you would want to see in a sprinter. He keeps himself kind of lean, but he's a very good eater. That's just his normal physique. He did the race at Saratoga essentially off of three works and he won convincingly.”

Ward is no longer concerned about how the pace of the race plays out, knowing his trainee has matured mentally since those first two career starts.

“Early on, he was just a little unseasoned,” Ward explained. “Now I think he's come to prominence where the jockeys realize what kind of horse he is and he's very rateable. So I think now from a tactical standpoint, the jockeys will be able to position him anywhere they want in the race and hopefully this next one will be a big one, because if he gets that done he stamps himself as a sire as far as what he'll accomplish in having a Group 1 win.”

The end goal for the season, the GI Breeders' Cup Turf Sprint, would of course only increase stud appeal, but also perhaps avenge Lady Shipman's narrow miss in the same race six years prior.

“If he does get through this race, which is what we hope and what we're on target for, we're aiming for the Breeders' Cup at Del Mar,” Ward said. “The track should be in perfect condition as Del Mar is that time of year and it would be really exciting.”

One of Ward's other top stable stars, dual Group I winner Campanelle (Ire) (Kodiac {GB}), is preparing for yet another European tour. The 2020 Prix Morny and 2021 Commonwealth Cup victress is pointing toward the G1 Prix Maurice de Gheest on Aug. 8.

“She just had a beautiful breeze at Arlington Park [on July 24],” Ward reported of the 3-year-old Stonestreet Stables colorbearer. “She's going to fly out of Chicago O'Hare airport and has a direct flight into Paris, and then she'll move on down to Deauville–essentially the same route that she traveled last year and won. It'll be a tougher assignment as we're taking on older horses, but we get a little bit of a weight break. Frankie Dettori is signed up to ride and he's not going to be able to have a steak the night before, but he's assured me that he's going to make the weight.”