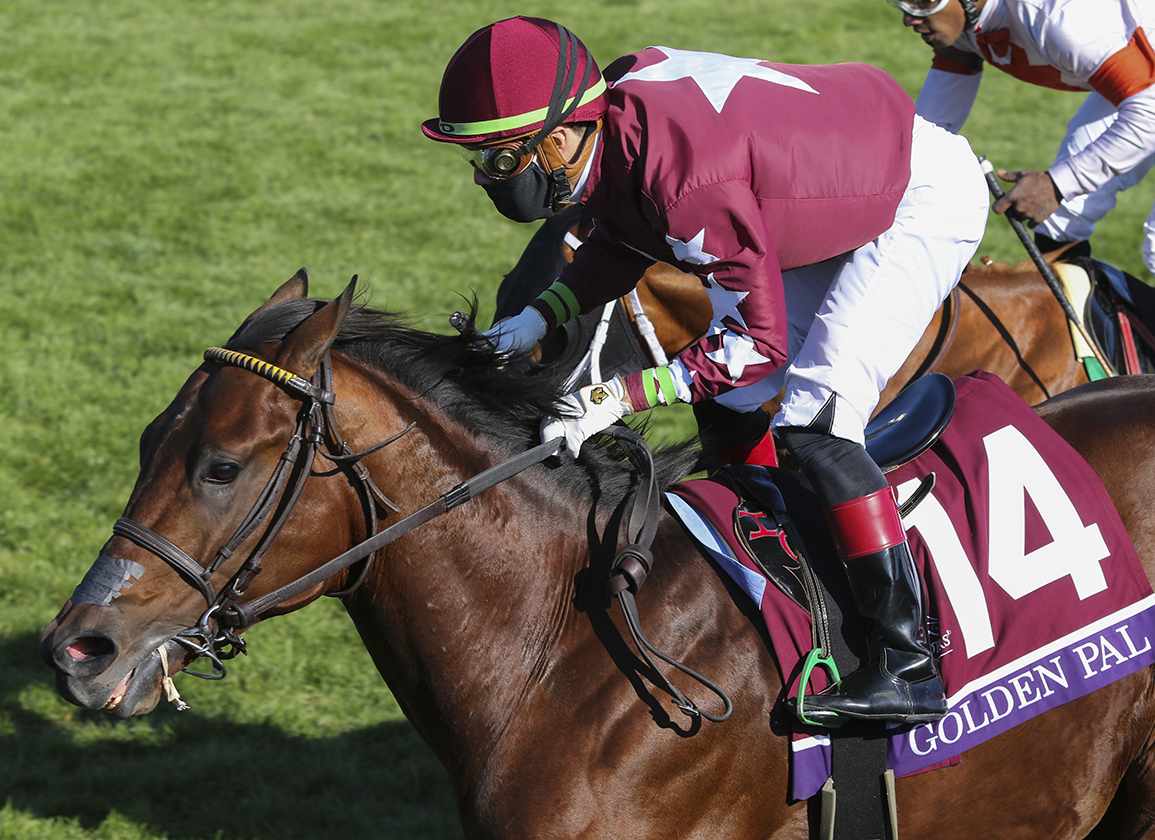 The first foal out of Lowe's outstanding 11-time stakes winner Lady Shipman (Midshipman), Golden Pal was bought back on a bid of $325,000 at the 2019 Keeneland September sale and was runner-up on debut over the Gulfstream main track last April before missing by a neck to The Lir Jet (Ire) (Prince of Lir {Ire}) in the G2 Norfolk S. at Royal Ascot in June. The Florida-bred bested his stablemate Fauci (Malibu Moon) to graduate in the Skidmore S. at Saratoga in August and validated 4-5 favoritism in the Juvenile Turf Sprint, scoring by 3/4 of a length at Keeneland last November.

The decision to sell Golden Lad was not taken lightly, Lowe said.

“It was very hard,” he admitted. “I've been in this business now for 36 years. To go from the very bottom to come all the way to the top and then finally win the Breeders' Cup, it made it very hard. But I wasn't going to be the one to try to repeat with another horse and spend millions upon millions of dollars without finding a top horse again. He's going to run three or four times this year and then head to the breeding shed. This sale comes at the right time and at the right price.”

All is not lost, however, as Lowe retains ownership of Lady Shipman, narrowly runner-up in the 2015 GI Breeders' Cup Turf Sprint, and her colt foal by Omaha Beach named Lieutenant General. Lowe also owns a pair of breeding rights in Golden Pal upon his retirement.

“Before she ran in the Breeders' Cup, I had an offer on the table for $3.5 million,” Lowe said of Lady Shipman. “People thought I had lost my mind for not selling her before the Breeders' Cup, but I told everyone, 'I've gotten this far with her and I honestly believe enough in her that I think we have a legitimate chance to win the Breeders' Cup.' And she got beat a bob. People have been trying to purchase her from me and I said, 'If we can't win the Breeders' Cup with her, we'll win it with one of her kids,' and we were right.”

Golden Pal is currently in training with Wesley Ward at Churchill Downs, where he breezed five furlongs in an easy 1:02.20 over a firm turf course June 20. Ward is pointing the bay towards a seasonal reappearance in the $120,000 Quick Call S. on opening day of the Saratoga meeting July 15 as a stepping-stone to the G1 Coolmore Wootton Bassett Nunthorpe S. at York Aug. 20. Golden Pal was an intended runner for last year's Nunthorpe, but the threat of wet weather scuppered those plans and he was rerouted for the Skidmore.

The Ward-trained and Coolmore-owned filly Acapulco (Scat Daddy) won the 2015 G2 Queen Mary S. at the Royal meeting and made the running in the Nunthorpe before finishing second as the 8-5 favorite.