Home » Archive » Europe » The Weekly Wrap: It's All About The Horses

The Weekly Wrap: It's All About The Horses 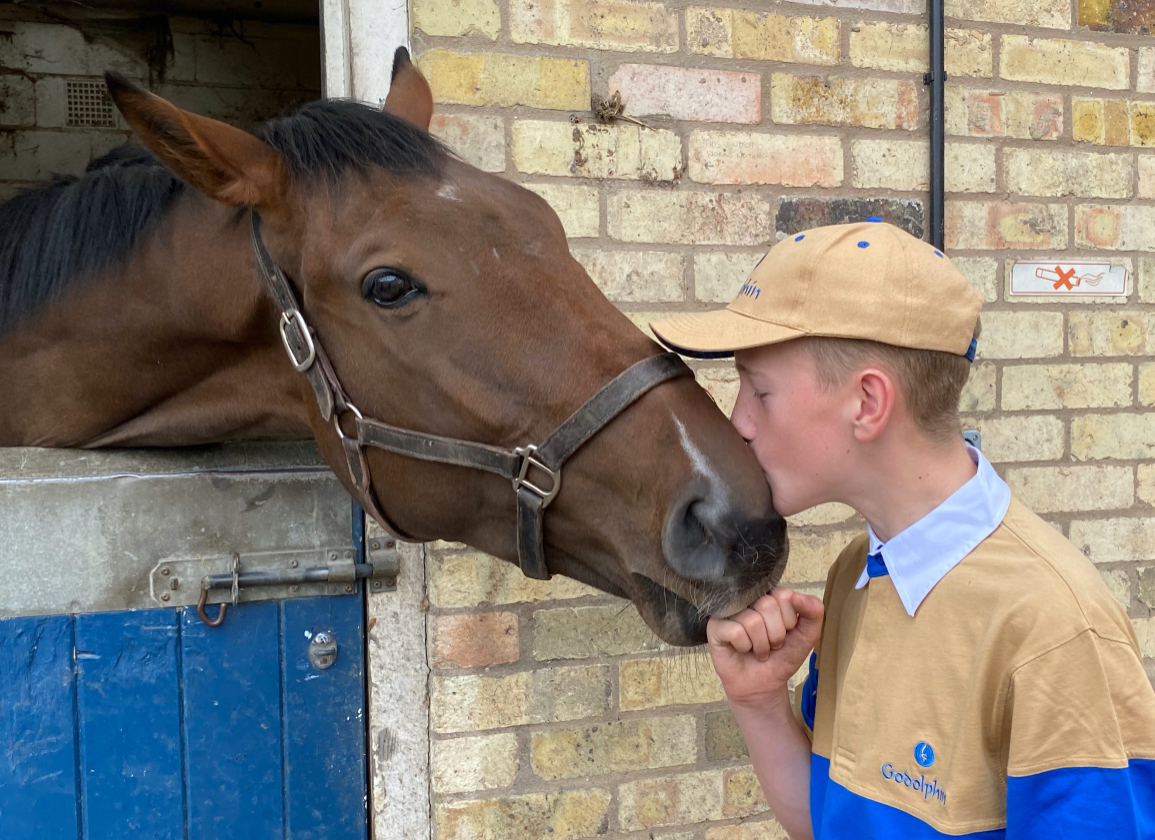 Those who work in racing know all too well the endless hours devoted to getting horses ready for the racecourse, and fans of the sport were able to see that for themselves during the first National Racehorse Week in Britain. The brainchild of National Hunt trainer Richard Phillips, the inaugural week-long spotlight on the racing industry included racing stables being open to the public all over the country, starting at Epsom and Malton, and culminating in Newmarket's popular Henry Cecil Open Weekend. It can be deemed a huge success.

This past Sunday alone, 30 trainers opened their doors throughout the morning at 'HQ', with a rare chance to see behind the scenes at Godolphin's Stanley House Stables proving immensely popular and attracting around 1,200 visitors in the 90 minutes in which it was open.

I live in one of the smaller stables in Newmarket and our yard had a constant stream of visitors who clearly loved being able to see and get close to the horses in their home environment. It may be easy for those of us who work with horses on a daily basis to forget sometimes what drew us to this life in the first place. Having the chance to see our stable through the eyes of our guests on Sunday morning really made the day extra special, bringing a reminder, amid all the politics and other background noise, that really racing is only ever about the horses.

We particularly enjoyed welcoming budding jockey Joshua Myers, who was first taken to a racecourse at the age of seven back in August 2014 on a day when our filly Indira (GB) happened to win at Ripon. Waiting near where the horses were being washed down after the race, Joshua asked if he was allowed to stroke Indira. So began his passion for the sport.

Seven years later, Joshua has now ridden in two pony races and clearly has his heart set on a future in racing. Over the weekend he travelled to Newmarket from Yorkshire with his family and as part of his tour came to our yard to meet Indira's first foal, now a 2-year-old.

As Joshua's younger brother got in on the photo with him and the horse, their dad said to me, “Oh no, I hope I haven't got two racing-mad sons.” I hope he has.

As we head into arguably the most important few weeks of the European Flat turf season, it's tight at the top of the British trainers' championship between Andrew Balding, Charlie Appleby, and John and Thady Gosden. While Aidan O'Brien has a commanding lead in Ireland, chased determinedly by his son Joseph, the excellent form of the stables of Jessica Harrington, Ger Lyons and Johnny Murtagh in particular have brought an interesting depth to the season.

Appleby may be narrowly behind Balding at present but he is without question the trainer of the moment. Currently operating at a 41% strike-rate and having sent out Group 1 winners Hurricane Lane (Ire) (Frankel {GB}) and Native Trail (GB) (Oasis Dream {GB}) the previous weekend in Britain and Ireland, not to mention a 1-2 in the G2 Park S. with Glorious Journey (GB) (Dubawi {Ire}) and D'Bai (Ire) (Dubawi {Ire}), his half of the Godolphin operation rolled on to North America this weekend with all guns blazing.

All three Grade I contenders at Woodbine–Walton Street (GB) (Cape Cross {Ire}), and the 2-year-olds Wild Beauty (GB) (Frankel {GB}) and Albahr (GB) (Dubawi {Ire})–were triumphant in their assignments, notably with erstwhile Godolphin stable jockey Frankie Dettori in the saddle for all three.

That quartet of Godolphin winners and Jockey Club Oaks fourth Creative Flair (GB) (Dubawi {Ire}) netted almost $1 million in prize-money for the stable which has two of the favourites for Europe's richest race, the Qatar Prix de l'Arc de Triomphe, in a little under a fortnight's time.

Important Call Up For Graffard

There was major news from the French training ranks over the last week with the announcement that Francis Graffard is to succeed his former boss Alain de Royer-Dupre at the Aga Khan's Aiglemont training centre at Gouvieux at the end of 2021. Graffard will continue to operate his own significant Chantilly stable, which in recent years has been responsible for a stream of top-class horses, including the Classic winners Channel (Ire) (Nathaniel {Ire}) and In Swoop (Ire) (Adlerflug {Ger}).

The impending retirement of de Royer-Dupre will bring to a close a near-40-year tenure at Aiglemont, during which time he has overseen the careers of such champions as Dalakhani (Ire) and Zarkava (Fr). He too has run a separate public training stable from which base the famously flighty Irish Oaks winner Chicquita (Ire), champion racemare Pride (Fr), and Melbourne Cup winner Americain were trained.

Stallions In The News

Wootton Bassett (GB) continues to play an ever more prominent role as a sire of note and with his biggest crop to date set to start appearing in paddocks around Europe from January, he is enjoying a decent season on the track, especially with his juveniles.

Wootton Bassett may now have departed for Ireland, but France can still boast the services of Le Havre (Ire), who is also enjoying a good spin. His major Arc hope Wonderful Tonight (Fr) has sadly been retired through injury but Le Havre was represented by another two stakes winners on consecutive days last week when Hunscote Stud and Chris Humber's homebred Ville de Grace (GB) landed the listed John Musker Fillies' S., and Waliyak (Fr) added the G3 Prix Bertrand de Tarragon to her previous listed success for Roger Varian and Fawzi Nass. A Saxon Warrior (Jpn) half-sister to Ville De Grace is scheduled to sell at Book 1 of the Tattersalls October Yearling Sale through Stauffenberg Bloodstock as lot 385.

We can also expect to see Le Havre's daughter Beholding (GB) lining up in Pattern races before too long following her 12-length victory at Kempton on Friday. This followed on from her previous 10-length win in novice company at Lingfield. Her Siyouni yearling half-brother is also entered for Book 1 though breeder Newsells Park Stud as lot 109.

Updates Give You Wings

It is 15 years since Dark Angel (Ire) won the G2 Mill Reef S. before going on to take the G1 Middle Park S., and on Saturday his son Wings Of War (Ire) landed the first part of that double for Isa Salman Al Khalifa–also the owner of the aforementioned Beholding–and trainer Clive Cox.

Wings Of War has a strong 'O'Callaghan feel' to him, having been bred by Guy O'Callaghan of Grangemore Stud, whose parents Gay and Annette own Yeomanstown Stud where Dark Angel has stood throughout his career. Moreover the colt is the first foal of the listed-placed Futoon (Ire), a mare by Kodiac (GB), the flagship stallion of Tally-Ho Stud, owned by Guy's uncle and aunt, Tony and Anne O'Callaghan. Wings Of War is not only following the example of his own sire in winning the Mill Reef but his dam is out of a sister to Galeota (Ire) (Mujadil), who won the same race in 2004 and went on to be runner-up in the following year's G1 Golden Jubilee S.

Guy O'Callaghan is also the breeder of Dark Angel's son Birchwood (Ire), the G2 Superlative S. winner who is now a first-season sire in France. His Grangemore Stud draft for Book 2 of the October Yearling Sale includes the full-brother to Wings Of War (lot 577), who is set to sell during the opening session. An update on that colt from O'Callaghan can be found in our accompanying preview for the Tattersalls Ireland September Sale, in which he sells a draft of four yearlings over the next two days.

She Was A Star

In less than two hours on Saturday the full-siblings Foxes Tales (Ire) and Astadash (Ire), both by Zoffany (Ire), went agonisingly close to pulling off a Group 3 double in Britain and Ireland. King Power Racing's 3-year-old Foxes Tales had already landed the G3 Rose of Lancaster S. on his previous start and he was beaten just a neck by Solid Stone (Ire) (Shamardal) when backing up in the G3 Dubai Duty Free Legacy Cup at Newbury.

For breeder Luke Barry of Manister House, arguably what happened a little later at Gowran Park was even more important when Astadash won the G3 Denny Cordell Lavarack & Lanwades Stud Fillies S. in the colours of Barry's mother Elizabeth and wife Rebecca. The 4-year-old has now been retired and will replace her mother Starfish (Ire) (Galileo {Ire}) in the paddocks at the Co Limerick farm.

Replace might be too strong a word to use as the celebrated Starfish has set a very high bar for her daughter to follow. Her second foal was the dual Group 1 winner La Collina (Ire) (Strategic Prince {Ire}), and as well as Astadash and Foxes Tales, the mare also produced the listed winner and Group 2 runner-up Fox Chairman (Ire) (Kingman {GB}) and Listed winner Entsar (Ire) (Fastnet Rock {Aus}) among her nine winners from nine foals of racing age. Even those who didn't garner black type were multiple scorers, including the 11-time winner Black Night (Ire) (Excellent Art {GB}). Starfish died earlier this year at the age of 18 after foaling a Kingman filly.

“She never missed,” said Luke Barry of Starfish in Newmarket on Monday morning as he oversaw his draft for the Tattersalls Ireland September Yearling Sale.

“Saturday was very special. Astadash has been so consistent and she will come home now. It's fantastic to have a group-winning daughter of Starfish for the farm. We couldn't afford to go and buy a filly like her, and to have bred and raced her is very special.”

Starfish's offspring have been as consistently successful in the sales ring as on the racetrack, with four of her yearlings selling for in excess of 260,000gns at the October Sale. King Power Racing paid 450,000gns and 400,000gns respectively for Fox Chairman and Foxes Tales.

“She always produced very good-looking stock who came back here to Book 1 year after year,” said Barry, who also celebrated being a Royal Ascot-winning breeder this year following the victory of Foxes Tales in the Golden Gates H.

“We're very excited about him as well,” he added. “I know the team behind him have big hopes that he could make up into a Group 1 horse for next year.”