Home » Archive » Shared News » The Week in Review: For Plesa, a Bittersweet Ending to Calder Saga

The Week in Review: For Plesa, a Bittersweet Ending to Calder Saga 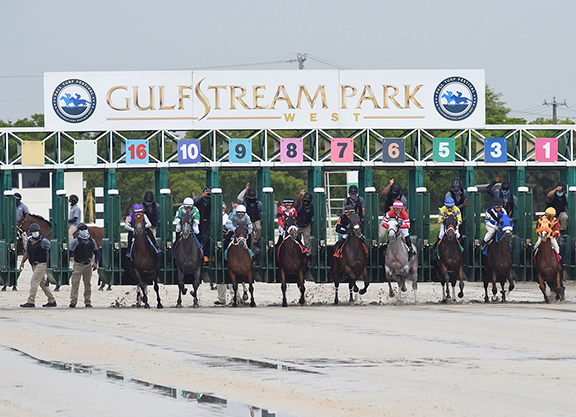 From a racing standpoint, there could not have been a more appropriate way for Calder to go out. There when the track ran its first ever race in 1971, trainer Eddie Plesa, Jr. won the last race run at the track that had been rebranded as Gulfstream Park West. Plesa won for the 1,326th time at Calder/GPW Saturday when Diligent (Temple City) won the final race that will ever be run at the South Florida racetrack.

“I didn't ask anybody to put me in the last race. It just happened. Like it was meant to be,” said Plesa, a member of the Calder Hall of Fame.

It was an emotional day for Plesa, made even more so by the twist of fate that saw him win the final race. Calder wasn't beautiful like Hialeah and the racing could never compare to Gulfstream, but to those who called it home, it was a special place where careers and great memories were made. That it is gone is hard to accept.

“To see it go, that's life,” Plesa said. “But it's like losing someone that was close to you. And I'm not the only one who feels that way.”

Plesa was working for his father, who had a string at the time for Fred W. Hooper, when Calder opened in 1971 and drew so many people for the first ever card that thousands of fans had to be turned away because the stands were filled to capacity. He would later take on the role of assistant racing secretary at Calder before opening up his own stable there. Calder is also where he me his wife, Laurie.

Over the years, Plesa has learned to accept change, and he knows that Calder is far from the first track to close in an era where it is hard to make a profit operating a racetrack. The hard part, for him, has been watching racing become so impersonal, much less of a sport than it was 1971 and, now, much more a business.

Calder was purchased in 1999 by Churchill Downs, a company where little else matters but the bottom line. When Churchill opened a casino at Calder in 2010, it needed racing because, without offering some sort of pari-mutuel wagering, it could not have a casino license. So eager to get out of the racing business in South Florida, Churchill entered into a six-year agreement in 2014 with the Stronach Group (TSG), the owners of Gulfstream. The Stronach Group would take over the racing operation at Calder, which was renamed Gulfstream Park West. Well before the lease expired, Churchill had the Calder grandstand torn down in 2015.

Some four years later and with the deal with the Stronach Group about to expire, Churchill made an argument to the state's Department of Business and Professional Regulation's Division of Pari-Mutuel Wagering that any form of pari-mutuel wagering would suffice when it came to the casino license. Churchill announced plans to go forward with a jai alia fronton, which is much less expensive to operate than a racetrack. Both the regulators and the courts signed off on their plan, which sealed Calder's fate.

“Churchill Downs, they're business oriented,” Plesa said. “But to a lot of people, horse racing isn't a business, per se. The owners, they're not in it to make money. They are in it because they enjoy the sport. They don't want to lose a ton of money but, to them, this is not a business. For Churchill Downs, all that matters is the business aspect. So you have a clashing of cultures, so to speak. Who's right and who's wrong? It depends on what side of the fence you are sitting on.”

Sitting on the racing side of the fence, Plesa said Churchill did everything it could to run Calder into the ground.

“Absolutely, there is a lot of anger among the horsemen and it's all directed at one company, Churchill Downs,” he said. “From my standpoint, they took a viable racetrack that was important, not just to South Florida, but to horse racing as a whole and they had no regard for it. To see what they did, there are many examples I can talk about. There was the time the escalator up to the second floor broke and they never bothered to fix it for the longest period of time. That was part of the plan. They didn't want to spend any money. When they closed down the floor that housed the Hall of Fame, people asked what did you do with all the pictures and there was no answer. They must have thrown them all away. They stopped maintaining the barn area. They literally tore down the clubhouse and the grandstand. Then Churchill Downs snuck behind everyone's back and they got a jai alia license so they could extricate themselves from the agreement that brought them a casino in the first place and so that they don't have to pay the horsemen any money.”

It wasn't that long ago that South Florida had three racetracks and Calder, Hialeah and Gulfstream were in a never-ending fight for the choicest dates. Now, Gulfstream is all that is left and will go forward in 2021 with the unenviable task of having to operate year-round. It remains to be seen how its turf course will hold up without getting any sort of meaningful break.

“There are some issues that will have to be looked at,” Plesa said. “Can you race 12 months of the year on one racetrack and on a turf course that is used so frequently? I don't know. Will there be a little break in between meets? I don't know. How long of a break would it be? It's going to be an interesting transition without the two months of racing away from Gulfstream Park.”

After Diligent's victory, Plesa, who did not attend Saturday's card, said he heard from about 100 people who reached out to congratulate him on winning the race. Many of them wanted to share their own memories of Calder with him.

“It was something special,” he said of the many messages he received. “I didn't think I would get so emotional over something like that. It brought back a lot of memories. That was heartwarming, but it was under sad circumstances. It was almost like someone had passed away.”

At some point racing has to take a look at its love affair with jackpot bets. At the expense of the everyday player, they are too often won by the bettors who have the resources to plow a huge amount of money into the pools and rely on sophisticated computer programs to place their wagers.

The latest example occurred Saturday at Aqueduct. According to the Daily Racing Form's David Grening, the winning ticket on the Empire Six was purchased through the Elite Turf Club, which is the go-to wagering platform for some of the sport's biggest bettors and is based in Curacao. The winning payout was $482,817.70.

Later that same day, an Elite Turf Club customer cashed in for $55,157.16 at the Meadowlands. The player had the only winning ticket on the Pick-5 and included a 75-1 winner on his or her tickets.

While those wins may be good news for some high rollers, the sport shouldn't lose sight of where that money came from. It is the $10 and $20 bettor who is responsible for those pools building up. With so much money often ending up in the hands of a high-volume player, the run-of-the-mill bettor is going broke.

Tracks cater to the big players because they wager such huge amounts. But what's happening is not sustainable. The bettors from places like Elite Turf Club are so dominating the wagering that they are making it that much harder for everyone else to keep their heads above water. The risk is that the big players will cause their competition to go broke, driving them out of the game. Some day, it will just be whales-versus-whale. That's something the sport can ill afford.