The Major Talking Points From Day Five At Royal Ascot 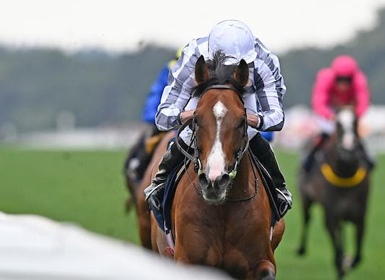 Royal Ascot 2022 had everything and from Ryan Moore playing with his rivals like a cat does with a mouse, to Charlie Appleby revealing he is eyeing a tilt at the A$10-million Golden Eagle with Noble Truth (Fr) (Kingman {GB}) after the gelding won the G3 Jersey S., the fifth and final day generated many more talking points.

Brian Sheerin has been digesting the action for the week and is back once again to flesh out the major takeaways from Saturday's action.

Appleby Bidding To Snare The Eagle With Noble Truth

The Aussies spent the week frightening the daylights out of anyone with a top-class sprinter in their stable. Everyone bar Charlie Appleby that is.

Chris Waller's Nature Strip (Aus) (Nicconi {Aus}) made the opposition look ordinary when winning the G1 King's Stand S. on Tuesday and, prior to Home Affairs (Aus) (I Am Invincible {Aus}) disappointing in the G1 Platinum Jubilee S., Appleby revealed that he would like to run G3 Jersey S. winner Noble Truth in Australia later this year.

Appleby deservedly carries a reputation for being one of the best in the business at travelling horses across the globe and hinted at an audacious tilt at the A$10-million Golden Eagle for Noble Truth on Oct. 29.

“I've been trying to find a horse for the Golden Eagle in Australia and he might just be ticking a few boxes for that,” he said after the race.

We have become accustomed to Australian sprinters landing big-race riches in Europe but few trainers would entertain the idea of taking on monsters like Nature Strip in their own back garden.

Luckily for us, Appleby is not like most trainers. It will be some spectacle if he can get Noble Truth to the Golden Eagle.

O'Donoghue Does A Sterling Job With Pearling Path

Imagine being brave enough to bring a horse to Royal Ascot in your first season holding a trainer's licence and, despite the market underestimating your judgment by sending it off a rank outsider at odds of 80-1, he goes on to run a cracker to finish second.

It would be an achievement worthy of some acknowledgement, wouldn't you think? Well ITV Racing didn't feel any need to cast any spotlight towards John O'Donoghue, who achieved just that, when Pearling Path (Fr) (Holy Roman Emperor {Ire}) ran a fine second in the Listed Chesham S.

O'Donoghue, who took up residency at John Oxx's legendary Currabeg Stables this year, has enjoyed a respectable start as a trainer, sending out a couple of winners domestically, of which, Pearling Path was one.

Pearling Path looked home for all money in the Chesham but possibly downed tools a little when he was left in front a little longer than ideal.

In many ways, Pearling Path snatched defeat from the jaws of victory and, while the defeat would have been painful for connections, O'Donoghue can hold his head high in defeat and is sure to be grabbing headlines before long.

Given the winner, Holloway Boy (GB) (Ulysses {Ire}), was winning the race on debut, it may go some way in explaining why O'Donoghue got no love in the press.

Interestingly, Holloway Boy's sister, Oppressive (GB) (Ulysses {Ire}) (lot 173), who failed to win in four starts last year, will be on offer at the July Sale at Tattersalls next month. Talk about a timely boost.

The Good, Bad And Ugly

Jockey form was one of the major talking points of the week and Ryan Moore confirmed himself the undisputed top dog in the weighroom by giving Broome (Ire) (Australia {GB}) a masterclass to win the G2 Hardwicke S. before delivering Rohaan (Ire) (Mayson {GB}) with a well-timed run to bag the Wokingham S. on Saturday.

Both rides were absolutely top drawer and a lot of people will argue that Moore made the difference aboard Kyprios (Ire) (Galileo {Ire}) in the Gold Cup on Thursday as well.

His ride aboard Changingoftheguard (Ire) (Galileo {Ire}), albeit there was an element of luck involved given the runner-up wandered across the track, was also sublime.

It is not the first big meeting this season where Moore has been flawless, either, given that he bossed Chester and was also excellent aboard Tuesday (Ire) (Galileo {Ire}) in the Oaks.

Frankie Dettori and Cieren Fallon endured contrasting fortunes this week, which generated just as much chatter as Moore's brilliance did, possibly driven by their respective trainers' reaction to the mishaps.

John Gosden criticised the legendary jockey for an “overcomplicated ride” on Stradivarius (Ire) (Sea The Stars {Ire}) in the Gold Cup and added that Dettori “should have won”.

Meanwhile, William Haggas defended Fallon for his ride aboard Maljoom (Ire) (Caravaggio) in the G1 St James's Palace S., saying, “we must not lambast him.”

Dettori is obviously one of the most experienced practitioners of his craft while Fallon has many years ahead of him but it was fascinating to see the contrasting reactions from Gosden and Haggas to the hands that they were dealt this week.

There were a number of eye-catchers this week, none more so than Maljoom in the St. James's Palace S., and he will need to be respected in all of the top mile races going forward. An unlucky fourth on Tuesday, he could be an interesting horse with a view towards the G1 Sussex S. at Goodwood.

Twilight Calls (GB) (Twilight Son {GB}) may not have been able to land a glove on Nature Strip when chasing that rival home in the G1 King's Stand S., but he enhanced his reputation in defeat and will be interesting in some of the top sprints as well.

Burning Victory (Fr) (Nathaniel {Ire}) has been held back by her jumping in the National Hunt sphere but showed she has a pretty big engine when finishing fourth, beaten a little over a length, in the G1 Gold Cup.

That represented a major step forward on all known form and, given that Willie Mullins does exceptionally well with these dual-purpose horses, she could be interesting with a view towards the G1 Irish St Leger, a race he won with Wicklow Brave (GB) (Beat Hollow {GB}).

Saga (GB) (Invincible Spirit {Ire}) was an unlucky loser in the Britannia and remains an interesting horse while Sun King (Ire) (Galileo {Ire}) looks extremely well-handicapped off 89 and ran well from a bad draw to finish third in the Golden Gates S.

Few will have sympathy for anyone wealthy enough to own racehorses running at Royal Ascot but the fact that there was only £11,190 on offer for finishing third in the Chesham S. does not make sense.

Royal Ascot is meant to be the biggest stage and connections of Lakota Sioux (Ire) (Sioux Nation), who filled the third spot, deserved more for that effort than what they'd pick up for winning a nursery.

The prize-money in Ireland is not much better, and it couldn't be better illustrated through the former Ger Lyons-trained Masen (GB) (Kingman {GB}), who duly won the $250,000 GIII Poker S. at Belmont Park Stateside on Saturday afternoon.

Masen was a good horse for Lyons, and won a €125,000 premier handicap on Irish Champions Weekend at Leopardstown before picking up just €22,500 for landing the Listed Knockaire S. at that track on his final start in Ireland last term.

Compare that to the $137,500 Masen picked up when successful at Belmont on Saturday, it simply doesn't make sense to keep horses of his standard in training in Ireland where the opportunity to run for big money is elsewhere.

The lure of having runners at these meetings is obviously huge but, when owners are lucky enough to come across horses to run at meetings like Royal Ascot, the prize-money should at least be adequate.