The `Black Eye' of Environmental Contamination 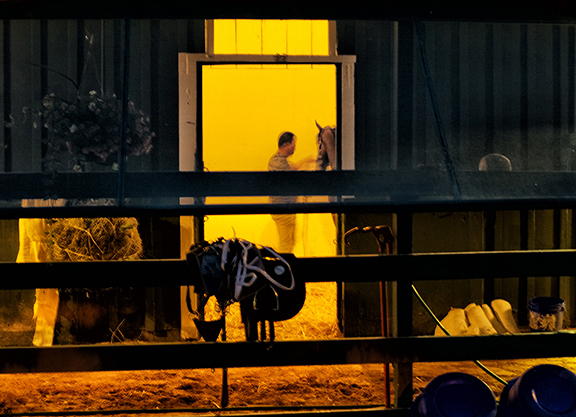 Over the past year or so, a series of high-profile positives attributed to environmental contamination have dogged racing's highest-profile trainer, Bob Baffert.

Last week, the California Horse Racing Board's Board (CHRB) conducted a hearing into the Dextrorphan positive incurred by the Baffert-trained Merneith (American Pharoah) in July. Connections had attributed the positive to cross-contamination stemming from Merneith's groom, who took DayQuil and NyQuil, both of which contain Dextrorphan.

Before that were the positives from Arkansas in May, when the Grade I-winning Gamine (Into Mischief) and Charlatan (Speightstown) subsequently tested positive for Lidocaine–an issue of cross-contamination, Baffert argued, from a stable employee wearing a pain-relieving Salonpas patch.

And before that was, of course, 2018 GI Santa Anita Derby-winning Justify (Scat Daddy)'s scopolamine positive, attributed to hay contaminated with scopolamine-laced Jimson Weed.

By virtue of Baffert's prominence within the sport, the issue of environmental contamination has been well laundered for a sun-lit public airing, with talk turning to medication smeared walls, urine-soaked bedding, contaminated hay and feeds, and backstretch workers taking all sorts of legal and illicit drugs.

While the issue is a bit of a complicated acronym soup involving things like testing thresholds, screening and detection limits, clearance times and ever more sensitive testing methodologies, expert opinion appears to be drawn into two broad camps.

On the one hand are those who believe adjustments need to be made to account for the inherent risks from inadvertent drug contamination. On the other are those who advocate a hardline stance, warning that a rule relaxation invites cheating.

Still, most agree that the industry needs to make fundamental revisions to the current status quo to avoid an ongoing string of contentious drug positives that further erode public trust in the sport.

“We can't live with rules that we've been using for 30, 40, 50 years,” says Scott Stanley, a professor at the University of Kentucky. “We've got to think outside the box and move forward. Racing keeps giving itself a black-eye.”

There have been a good 20 years of research illustrating the where and what of environmental contamination–some have helped answer lingering questions, even if others have also somewhat muddied the waters.

The International Conference for Racing Analysts and Veterinarians at the turn of the millennium unveiled a series of papers showing how even low-level exposures to naproxen, ibuprofen, isoxsuprine and flunixin–all of them commonly used therapeutic medications in racing–could result in a subsequent medication violation.

In what some regard a seminal 2008 study, Steven Barker, former director of the Louisiana State University Equine Medication Surveillance Laboratory, analyzed the test barn and the receiving barn stalls at a Louisiana racetrack.

Barker found the presence of nonsteroidal anti-inflammatory drugs like flunixin, phenylbutazone and naproxen in the soil in stalls, on stall surfaces, in the circulating dust, and in accumulated pools of water on the backstretch. All of the samples collected contained cotinine, the predominant metabolite of nicotine and a biomarker for exposure to tobacco smoke.

None of those drugs Barker detected, however, were at concentrations sufficient to trigger a positive test.
A few years ago, Charles Town suddenly found itself at the center of a series of naproxen positives, mostly among horses shipping in. Naproxen is a nonsteroidal anti-inflammatory commonly found in drugs like Aleve and nicknamed the poster-child of stall contamination.

In response to this rash of positives, researchers swabbed 21 ship-in stalls at Charles Town and discovered high levels of naproxen in four stalls and reportedly low-levels of the drug in almost all.

Besides naproxen, the researchers discovered things like acepromazine and glycopyrrolate, along with traces of common human substances like metoprolol, a blood-pressure medication, and methadone and tramadol, which are opioid and opioid-like pain-medications respectively. Only four of the 21 tested stalls swabbed clean.

Other studies show more pointed findings, including a potential connection between bedding soaked with contaminated urine and an elevated risk of a positive test.

In this French study from 2011, horses administered flunixin orally and intravenously were housed on three different levels of bedding: one deep and one thin bedded stall (both of them stripped completely daily), and another stall managed the usual way (just the muck and wet patches removed).

A full day after the drug was administered, one horse was moved to a stable in which no horse had been given flunixin.

The only horse that subsequently tested clean was the horse moved to an uncontaminated stall, while the thinly bedded stall stripped daily constituted the highest risk of a positive test.

As a result of a number of positives for typically human-use antihistamines and anti-inflammatories, the British Horseracing Authority (BHA) embarked last year upon a series of different studies to determine the threat of environmental contamination in the UK.

One study involves the swabbing of racetrack stabling, another the boxes at private training yards, while the third study looks at the potential relationship between bedding contaminated with low levels of medications and the risk of a positive finding.

According to David Sykes, no results are currently ready for public consumption, but he did say that they had found “very low levels” of medications in the racecourse stables. “I won't say there was none,” he says. “But I won't say there's lots and lots.”

The question now is: What does the gestalt of these studies reveal?

“Put down that golf club”

According to Barker, they illustrate just how prodigiously substances exist in and on the bedding, walls, dirt, dust, feed and water tubs of the backstretch environment–even in the feed vanned into the track. Then there's the human element.

Given how prevalent contaminants exist in the environment, however, why aren't drug violations a more common occurrence?

Outside of a cluster of positives that can be traced back to something like a batch of contaminated feed, “It can be a random thing,” says Barker, pointing to a lightning strike quality to the event, with a very specific chain of circumstances that lead to a positive finding.

The horse must be exposed to a high enough quantity of a substance close enough to a race, for example. Just as importantly, perhaps, is that a test is conducted in the first place. “How many horses aren't being tested?” Barker wonders.

On the flip side of the same coin are those experts who argue that the link between the environment and the test tube is far from clear.

“My definition of environmental contamination is exposure to a substance that has the potential to result in a detectable concentration in a horse, and that that exposure occurred beyond the control of the trainer,” says Mary Scollay, executive director and chief operating officer of the Racing Medication and Testing Consortium (RMTC).

“Some of the things that are being posited as environmental contamination I disagree with because I believe they're preventable,” she adds. “What I feel has not been adequately demonstrated is the link between what's in the environment and what's in the horse.”

For one, the concentrations being detected in the backstretch environment are typically at miniscule amounts, Scollay says. As an example, she points to a calculation that Stanley made of Barker's 2008 data: That a horse needed to consume 32 tons of dirt to obtain the equivalent of a single dose of phenylbutazone.

(In response, Barker emphasizes how his original study was intended primarily to detect background levels in the backstretch environment, and that subsequent studies–the French study in particular–have made the connection between contamination and a risk of a positive finding).

There are other variables, like the manner by which contaminants enter the horse's body, as their metabolism processes substances differently depending on how it's introduced into the system. “Not everything that enters the mouth gets absorbed,” Scollay says.

The connection therefore between a backstretch worker taking a drug–whether legal or illicit–and a positive finding in the horse they have contact with is similarly dependent upon the substance, location and levels of exposure, says Scollay. “Once again, there's no blanket answer.”

Some substances are much more stable in the environment than others, meaning that they maintain their chemical make-up–and therefore their pharmacological potency–for long periods of time. This is borne out, say experts, in how widely used medications like furosemide are inconsistently detected in the environment.

At the end of the day, however, some trainers are able to operate large barns in multiple jurisdictions without falling foul of the regulators, says Scollay. While the “lightning strike” analogy is applicable in some cases of environmental contamination, she adds, “If you get struck by lightning twice, then I'm going to suggest you put down that golf club.”

Another key component of this issue is how testing methodologies are becoming ever more sensitive–with some laboratories proving more sophisticated than others. Indeed, the naproxen positives at Charles Town coincided with state regulators switching the drug testing contract to the “highly capable” Denver-based Industrial Laboratories, according to the authors of the 2018 study.

“What's been the real problem here is we came from a period of time when most of these kinds of residues simply were not being detected before in horses,” says Barker.

“Our methodology was not broad based to cover all possible drugs. Sensitivity of instrumentation was not nearly what it is today–the sensitivity has really increased,” he adds. Indeed, “There's the ability to test some of these drugs to zeptogram levels.”

This basis of comparison is one frequently raised by advocates of the horsemen, and critics of the current testing system. But other experts object to the quantification of testing methodologies in this manner.

“It all sounds very dramatic,” says the director of a U.S. laboratory, who asked to remain anonymous due to their company's involvement in ongoing litigation. “But it's kind of misleading.”

To make their point, the lab director says that the amount of a particular substance in a single sample is a fraction of what's in the body as a whole, and that a horse has, on average, 50 liters of blood in its body. Fifty liters, therefore, is the equivalent of 50,000 milliliters.

“The key term is per milliliter,” says the lab director, pointing to betamethasone, a steroid medication, which has an RMTC testing threshold of 10 picograms per milliliter.

The lab director also takes issue with the argument that a positive finding at a low-level is inherently innocuous, as that assertion fails to take into account origins of dose and administration.

“The people that say the concentration is so low, it has to be environmental contamination–that's the biggest load of horse manure that I can think of. Obviously, the level cannot tell us anything of how it got into the horse and at what level,” the lab director says.

“People have this perception that the technology can capture everything and anything, and so, 'you guys are finding things all the time,'” says the lab director. “Keep in mind, 99% of the horses test clean. If it was that easy to contaminate your horse, we would be seeing a whole lot more cases than we actually are.”

In part two we look at possible solutions to the problem, with experts zeroing in on testing thresholds, screening and detection limits along with formal regulatory processes.