Baffert Gets 15 Days; Charlatan and Gamine DQ'd for Lidocaine Positives 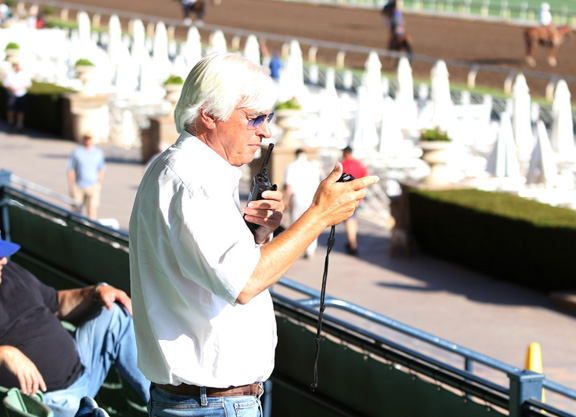 Hall of Famer Bob Baffert has been suspended 15 days for previously announced lidocaine positives found in post-race samples from two runners on Oaklawn Park's May 2 card, GI Arkansas Derby division winner Charlatan (Speightstown) and allowance winner Gamine (Into Mischief). The Oaklawn Park Board of Stewards has also disqualified both horses from their wins and ordered purse monies to be redistributed in rulings dated July 14 and made public Wednesday.

News of the positives first surfaced in late May, and it was revealed last week that split samples taken from both runners confirmed the original test results. In Baffert's defense, attorney Craig Robertson said it was believed an employee had inadvertently exposed the two horses to Lidocaine while wearing a pain-relieving Salonpas patch. Robertson also noted the trace amounts of the drug would have had no impact on the performances of the two horses. Lidocaine is a Class 2 substance.

The ruling calls for Baffert to be suspended from Aug. 1 to Aug. 15, but the conditioner told the TDN that he plans to appeal: “We're definitely going to appeal. We are very disappointed. I thought we did a great job answering this and showing how innocent I am. I understand there is the trainer's responsibility rule, but the levels, especially with Charlatan, were so low. We showed them the science that showed it wouldn't have affected the horses at all.”

With Charlatan's disqualification to last place in his division of the Arkansas Derby, Basin (Liam's Map)–most recently 10th in Saturday's GII Toyota Blue Grass–now receives 100 GI Kentucky Derby qualifying points, with Gouverneur Morris (Constitution) earning 40; Winning Impression (Paynter) 20; and Anneau d'Or (Medaglia d'Oro) 10. Basin's connections had previously announced that he had been taken out of consideration for the Derby in favor of shortening up in distance going forward.

Charlatan, meanwhile, was sidelined in June due to an ankle issue. Baffert also won the other division of the Arkansas Derby with Nadal (Blame), who was later retired due to a condylar fracture. Baffert trainee Authentic (Into Mischief), owned by a group that overlaps with Charlatan's ownership group, is 4-5 on the morning line for Saturday's GI Haskell S. at Monmouth.

Gamine's neck victory in that May 2 allowance came over Speech (Mr Speaker), a decisive winner of the GI Ashland S. at Keeneland this past Saturday. Gamine would go on to take Belmont's GI Acorn S. June 20 by 18 3/4 lengths, earning a 110 Beyer Speed Figure in one of the most dominant performances by a horse in 2020.