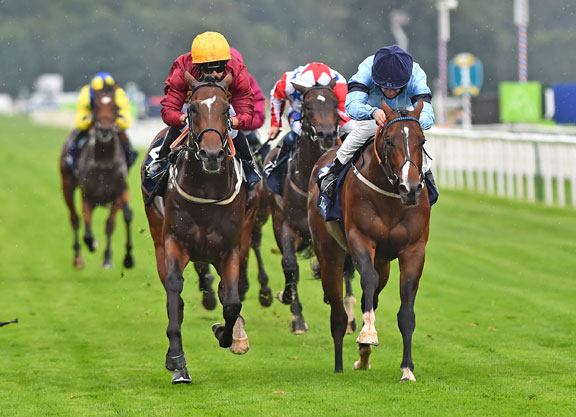 With vital course-and-distance experience to call upon, Mark Johnston's Gear Up (Ire) (Teofilo {Ire}) proved toughest in a war of attrition to land York's G3 Tattersalls Acomb S. on Wednesday. Successful over this seven-furlong trip on debut July 25, the 9-1 shot was placed prominently by Silvestre de Sousa from the outset and battled gamely to overhaul Spycatcher (Ire) (Vadamos {Fr}) close home. At the line, there was half a length between them, with the long-time leader Broxi (Ire) (Kodi Bear {Ire}) three lengths away in third having forced a pace which found many out. “He was a different horse from his debut here,” the winning rider explained. “He jumped off and knew his job. He showed a very willing attitude.”

Getting loose in the preliminaries prior to his debut, Gear Up was ultimately able to win with some authority there and his stamina came to the fore with this demanding pace cracking several of the fancied contenders. “Everyone was thinking of him as quite a difficult horse after his debut, where he was off the bridle early before flying home,” Johnston said. “He was very different in the prelims today–laid-back and relaxed and Silvestre said he learned more today than first time. He's not the most impressive horse at home, but we've seen his style again today, he looked the first under pressure then found more and more. He wants a mile now and he's bred to get a mile,” his trainer added. “We weren't thinking he'd be ready this early, despite it being August now. He'll have one or two more runs maximum and my first thought was the [G2] Royal Lodge.”

Karl Burke said of the maiden Spycatcher, “I thought we had it at the furlong pole when he went a length or so clear. He's a nice colt, but there's improvement in him. He didn't really have a race first time when it all went wrong and he fell out of the stalls. He'll learn a lot from today and he's having a good, healthy blow. He travelled great and the winner is just typical of one of Mark's–they don't stop. I'm not sure where we'll go now. We'll just get him back home and see how he comes out of it.”

Out of Gearanai (Toccet), a half-sister to the G3 Manuel J Guiraldes winner Plainswoman (Arg) (Zensational), the Jim Bolger-bred Gear Up is therefore a full-brother to the G3 Eyrefield S. scorer Guaranteed (Ire). Plainswoman's half-sister Sanaara (Anabaa) is the dam of another useful Bolger runner by Teofilo in Theobald (Ire), who was runner-up in the G3 Anglesey S. and G3 Tyros S., while the third dam is the GI Spinster S., GI Kentucky Oaks, GI Beldame S. and GI Gazelle H. heroine Dispute (Danzig). Also connected to Agitare (Ire), another Teofilo who was third in the G2 Golden Fleece S., and the G3 Round Tower S. and G3 Leopardstown 1000 Guineas Trial winner Maoineach (Congaree), Gearanai's yearling is a full-brother to the winner.