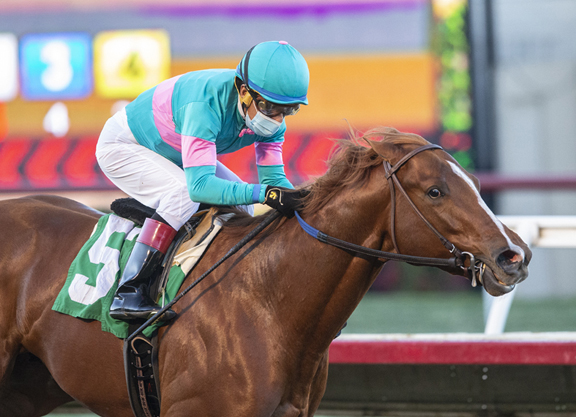 Tina and Jerry Moss's Red Flag became the stakes winner for his freshman sire, 2016 GI Breeders' Cup Dirt Mile victor Tamarkuz (Speighstown), with a romping 7 1/4-length score in the GIII Bob Hope S. at Del Mar Sunday. Sent off at 10-1, the chestnut colt was widest of four scrambling on the front end early, with Weston (Hit it a Bomb) down along the rail and favored Spielberg (Union Rags) and Coastal Kid (Coast Guard) all to his inside. Weston took a slim advantage after a quarter in :22.37, but the race changed in an instant when Coastal Kid, caught in tight quarters between the tiring Spielberg and the rallying Red Flag, took up sharply near the three-eighths pole. Red Flag surged to the lead with authority after a half in :45.34 and extended his advantage with every stride down the lane. Uncle Boogie (Ride On Curlin) rallied for second over Ambivalent (Constitution). Spielberg settled for fourth. After an inquiry into the incident on the turn, the stewards made no change to the order of finish.

“He broke running and he wanted to go,” said winning rider Victor Espinoza. “He seemed to be more professional today than last time. He's still a baby and he was fooling around before. But he was good today and did all the right things. He'll go farther, for sure. With the way he ran today, why not?”

“I didn't really expect that kind of performance,” said Shirreffs. “I was hoping to get a placing. He broke his maiden from way off the pace and he's been doing better and better in the mornings, but he's not a brilliant work horse. So this was a pleasant surprise. You always hope but you never know.”

Red Flag opened his career with a well-beaten fifth-place effort going 5 1/2 furlongs over the main track at Del Mar Sept. 6, but moved to the lawn to graduate in late-running style going that same distance at Santa Anita Oct. 10.

“He's gone from 5 1/2 furlongs to seven, so it looks like he'll be able to go longer,” Shirreffs said. “It's special because Mr. and Mrs. Moss were here today and got to see him run.”

Canadian breeder Elaine Macpherson purchased Surrender, in foal to Morning Line, for $40,000 at the 2014 Keeneland November Sale. The foal the mare was carrying was Surrender Now, who won the 2017 Landaluce S. The 11-year-old mare has a yearling colt by Tiznow, who RNA'd for $23,000 at last month's Fasig-Tipton October Yearling Sale. She produced a colt by Mendelssohn this year and was bred back to Catholic Boy.