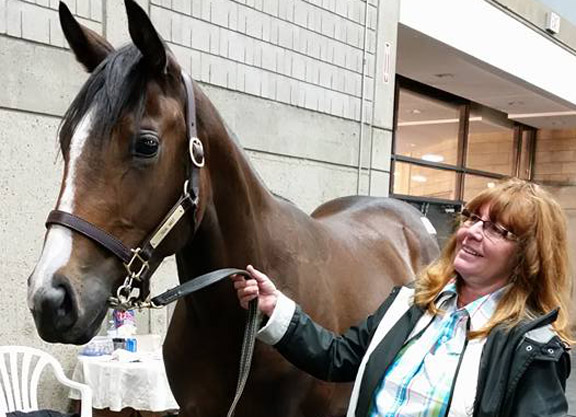 Canadian breeder Elaine Macpherson admitted she decided to “bite the bullet” when purchasing the 5-year-old mare Surrender (Stormy Atlantic), in foal to Morning Line, for $40,000 at the 2014 Keeneland November Sale. The investment began to look shrewd two years later when the mare's Morning Line foal became impressive Landaluce S. winner Surrender Now. Through the Warrendale Sales consignment, Macpherson will offer her second foal out of the mare, a colt by first-crop sire Fed Biz, as hip 361 at next week's Fasig-Tipton October Fall Yearling Sale.

An accomplished equine artist, Macpherson admitted her love affair with racing started at a young age.

“The first thing I ever drew, when I was 4 1/2 years old, was a running horse,” Macpherson said. “I actually still have the little crayon drawing. Neither one of my parents were interested in horses, but I was always in love with them. I grew up in Toronto and every day when I came home from school, I was eight years old, the radio station, CFRB, would have the 'Call to the Post' and they would announce the race results. I would say to my mom, 'My people are calling me.'”

Macpherson attended Ontario College of Art and went directly from graduation to Woodbine.

“I met with Bruce Walker, who was the publicity director at the time, and I showed him my portfolio,” Macpherson said. “A week later, I was at the advertising corporation that was doing the work for Woodbine and they hired me to do a bunch of drawings for horse racing ads for The Globe and Mail and The Telegram.”

While plying her trade as an artist for 'horsey' clients like The Ontario Jockey Club and Barrington's Horse Store, Macpherson continued to keep an eye on the Thoroughbred world, acquiring racehorses and retraining them for dressage. Eventually, she decided it was time to take her dream full time.

“I had an advertising studio in Toronto and I kind of hit a mid-life crisis,” she recalled. “I decided I wanted to move out west and realize my life's dream, which was to own a horse farm and breed Thoroughbreds. I moved out to Alberta–that was right after the 1989 Olympics. The Olympics had been in Calgary and I thought, 'Boy, everybody there looks like they are having a lot of fun.' I bought a horse farm with a cousin of a friend of mine that I had been in business with in Toronto. We built a little racetrack, so it was for legging up horses in the spring before they went to the track.”

Macpherson had almost immediate success as a breeder. The first mare she acquired was Shy Beauty (Great Gladiator), who produced the hard-knocking sprinter Timely Ruckus (Bold Executive) in 1993. Sold for $10,000 at the CTHS Alberta Yearling sale, the dark bay gelding went on to win 17 stakes in western Canada.

“I think he was sprint champion five years' running,” Macpherson said of Timely Ruckus. “He raced until he was eight years old. When he was six, he broke the track record for 6 1/2 furlongs and it stood for 18 years.

“Then I started thinking I really knew what I was doing,” Macpherson, who is also breeder of stakes placed Tidal Mist (Numaany), laughed. “I started picking away, buying a horse here, buying a horse there, selling some horses in the yearlings sale. As time went on and given the current market, I realized I was going to have to start buying better stock and breeding to better stallions and just move up the ranks that way.”

Macpherson had the plan to upgrade her stock as she attended the 2014 Keeneland November sale and, with the help of bloodstock agent Gayle Van Leer, came home with Surrender.

“I was wandering around at Keeneland looking at this horse and that horse and this pedigree and that pedigree,” Macpherson said. “I asked Gayle to look at her. I said, 'She has some sparkle about her that I really like.'”

Macpherson had one more request of her bloodstock agent.

“I said to Gayle, 'You have to bid,'” she explained. “I can't bid on horses. I just lose my mind–I thought, 'There goes my house, my farm.' When I bought Surrender, I really bit the bullet to buy her. I said the first foal should be named Don't Tell Harvey because he's my husband and I bought this horse without him knowing.”

Surrender Now, the mare's second foal and first for Macpherson, became the breeder's highest-priced sale to date when selling to pinhooker Bruno DeBerdt for $40,000 at the 2016 Keeneland September Yearling Sale. The filly brought $220,000 from Gary Hartunian's Rockingham Ranch at this year's Barretts March Sale. A debut winner at Santa Anita in June, the bay filly romped home by eight lengths in the July 2 Landaluce S.

Asked what it was like to watch Surrender Now's Landaluce victory, Macpherson said, “Thrilling. It was thrilling like you couldn't believe. I was screaming at the computer so loud I couldn't talk for three days after that.”

With the help of Van Leer, Macpherson chose multiple graded stakes winner Fed Biz for Surrender's next mating. The resulting yearling will head through the Fasig-Tipton sales ring during Monday's first session of the October sale.

“He is a big, lanky horse,” Macpherson said of the yearling. “He's definitely going to be a two-turn horse–I don't see any sprint to him at all. He is huge. He is a strong-bodied, big-boned horse.”

While Surrender failed to get in foal last year, the mare is currently in foal to GI Breeders' Cup Dirt Mile winner Tamarkuz (Speightstown).

Macpherson maintains a commercial broodmare band of between five to 10.

“They are in Kentucky, they are in Ontario, they are in California and they are here in Alberta, so I pay a lot of trucking bills,” she said of the band. “I have a house in California, so I go down there in the winter. I do a lot of the bronzes for Woodbine for their stakes awards, so I go down to California to create in the winter time and then I'll bring a couple or three mares back for the summer and just look after them. They are kind of all over the place, that's why I don't want to have too many because it gets pretty expensive in board. But I've got about 15 mares picked out to look at at the November sale at Keeneland.”

Macpherson has high hopes for the future.

“Gayle has become a real friend of mine and a really good asset when we are looking at horses to breed to and mares to buy,” she said. “She introduced me to Kitty Taylor at Warrendale and she sells my horses. We have done quite well. I think we're going to get better and better as we go along here.”

The Fasig-Tipton October sale gets underway Monday at Newtown Paddocks and continues through Thursday with sessions beginning daily at 10 a.m.