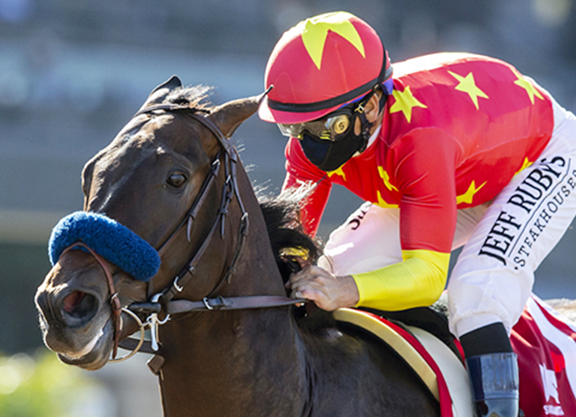 Life Is Good in his Figure-8 bridle | Benoit photo

Gary and Mary West bred last weekend's hugely impressive Gll San Felipe S. winner Life Is Good (Into Mischief) and Saturday's leading Gll Rebel S. contender Concert Tour (Street Sense), both 'TDN Rising Stars', both trained by Bob Baffert and probably the two leading Classics aspirants in his barn, with five wins, three graded triumphs and no losses between them. That's quite a feat for the Wests and their racing manager Ben Glass–clients of Werk Thoroughbred Consultants–because the Baffert barn is loaded with expensive and well-bred auction purchases for a number of big-time outfits, including the “Avengers” group that raced Gl Kentucky Derby and Breeders' Cup Classic winner Authentic (Into Mischief) last year, and their former partners in Triple Crown winner Justify (Scat Daddy), WinStar and CHC, which races Life Is Good.

The Wests don't race in partnerships, going it exclusively alone–a rarity these days. They mostly buy yearling colts at Keeneland with a focus on Classic types with the aim of developing stallions, and their nascent breeding operation is mostly based around supporting their young horses at stud, including champions Game Winner (Candy Ride {Arg}), West Coast (Flatter) and Maximum Security (New Year's Day), plus American Freedom (Pulpit). That they've raced three Eclipse Award-winning colts in the last four years tells you all you need to know about their program, but Life is Good and Concert Tour, plus the promising 3-year-old homebred filly and 'TDN Rising Star' Slumber Party (Malibu Moon), are now showcasing the power of their broodmare band, too. Eventually, the plan for the Wests is to sell yearlings commercially, and selling a top colt like Life Is Good, which WinStar and CHC purchased for $525,000 at Keeneland, is good business to that end.

But did the Wests sell or keep a potential Derby winner? Much can happen between now and then, but if Concert Tour and Life Is Good were to meet in the Derby, it would test that question and add some drama to the race for the Wests–not that they need any more drama in Louisville after getting disqualified from first in the Derby with Maximum Security in 2019.

At the moment, Life Is Good, who is out of the Distorted Humor mare Beach Walk, is widely considered the most exciting and talented colt of his class, and that he won the San Felipe by open lengths with a massive 107 Beyer Speed Figure in early March makes him look like a man among boys.

“Based on what I saw today, Life Is Good is by far the best 3-year-old right now,” Gary West told me after the race. “But he will not make an uncontested lead in the Derby. Pace makes the race.”

He's right, of course, because there are questions about the colt's ability to see out 10 furlongs at Churchill Downs, certainly based on the speed he shows early in races. One of the reasons Life Is Good was sold and Concert Tour, who's from the Tapit mare Purse Strings, was retained is that the former is by Into Mischief, a horse who a few years ago was mostly known as the sire of outstanding sprinter/milers, while the latter is by a Kentucky Derby winner.

Perceptions about Into Mischief have changed since Ben Glass sent us an email in late 2016 that said, “Mr. West has put Into Mischief on his list this year [for stallions to use].” The stallion's fee had been rising steadily since it hit a low of $7,500 in 2012, and it was bumped to $75,000 for 2017 from $45,000 the year before. Nevertheless, Into Mischief was represented by only two Grade l winners at that time, Goldencents and Practical Joke. The former had established himself as a premier miler and the latter, from a Distorted Humor mare like Life Is Good, was a 2-year-old of 2016 that had accounted for two Grade l races at 7 furlongs and a mile, the Hopeful and the Champagne, respectively. By the time Life Is Good was foaled in 2018, Practical Joke had reverted to sprinting after a fifth-place finish in the Derby and won the Gl H. Allen Jerkens over seven furlongs, but Audible had won the Gl Florida Derby in early 2018 and would go on to finish third in the Derby, hinting at what Into Mischief could accomplish under the right conditions.

In the August 23, 2019, column “Into Mischief's Changing Profile,” I foreshadowed the arrival of horses like Authentic when I wrote: “With the better mares he's being bred to, it's easy to project that his Grade l output at 1 1/8 miles and up will increase in the coming years. When that happens, his progeny earnings should rise that much more, which means that his rivals on the General Sire list are in for a greater tussle in the ensuing years. The latest chapter of this impressive stallion's book is just being written. Stay tuned.”

To date, Into Mischief is the sire of eight Grade l winners, and he led the General Sire list for the second consecutive year in 2020 with $22,507,940 in progeny earnings, almost $10 million more than runner-up Medaglia d'Oro. The year before, he'd led the list with earnings of $19,179,389, a little more than $3.5 million ahead of Curlin.

The Wests, however, decided to sell Life Is Good in 2019 because he was bred on the same cross as sprinter/miler Practical Joke, but they were only prepared to let him go at their price. They got it–$525,000–from WinStar and CHC, who'd raced Into Mischief's son Audible, and it was a no-brainer for the partners to send him to Baffert after their success with Justify and Baffert's handling of Authentic and the outstanding speed filly Gamine (Into Mischief) last year.

The Figure-8 and Baffert

In Gamine, the $1.8 million Fasig-Tipton Midlantic 2-year-old sales topper in 2019; and Authentic, a $350,000 Keeneland September yearling, Baffert had a bird's-eye view of the best of Into Mischief–and the stallion's limitations and potential as well. Both Gamine and Authentic were fast, but the filly, a champion sprinter, had distance limitations at nine furlongs like many past top Into Mischiefs while the colt proved he could carry his speed 10 furlongs against the best, surprising many in the process.

Both Gamine and Authentic are lighter and more elegant physicals, whereas Life Is Good is a more robust and masculine model. Like the other two, speed is his game, but how far he can carry it remains the question. In his second start, you'll recall, Life Is Good was cruising easily on the lead and building a sizeable margin in the stretch of the Glll Sham S. before Baffert's Medina Spirit (Protonico), a $35,000 OBS July 2-year-old, took a substantial bite out of that lead at the finish.

As Baffert was preparing Life Is Good for the San Felipe, I noticed he'd called an audible for the colt's last work before the San Felipe and fitted him with a Figure-8 noseband, which is used for control and for encouraging proper breathing through the nostrils by keeping the colt's mouth shut. I texted Baffert last Friday, before the San Felipe, inquiring in text-speak: “Noticed you put fig8 on Life Is Good for 2/28 work and have galloped him in it since. Rare for you. Should help his air, right?”

Baffert replied: “Put it on more for control. Slow him down. His air is great.”

The move proved both inspired and effective, because Life Is Good had eight lengths on Medina Spirit at the end of 1 1/16 miles whereas he'd held the same colt to a 3/4-length margin in the Sham at a mile. As Gary West pointed out, however, Life Is Good had it easy on the lead in the San Felipe with Medina Spirit hard held early to give his stablemate breathing room and the others not wanting to tangle early, but that triple-digit Beyer and the manner in which he won, even with the drifting to the middle of the track, was undeniably impressive and a move in the right direction if 10 furlongs is the goal.

The Twitter persona known as @o_crunk–if you're not following him, you should, because he's the master of stats– tweeted after the race that since Jan. 1, 2010, there have been 132 3-year-olds that have earned Beyers of 100 or more from January through April, with Baffert training 32 of them and Todd Pletcher 27 in second place. In a follow-up tweet, @o_crunk put this in context, noting that Baffert and Pletcher also get the most expensive auction purchases to work with, and he included an old blog post titled “The Toddster in context” that backs up this hypothesis with auction numbers.

There's a reason why folks pay good money for yearlings and 2-year-olds at auction, and why they send them to Baffert, too.