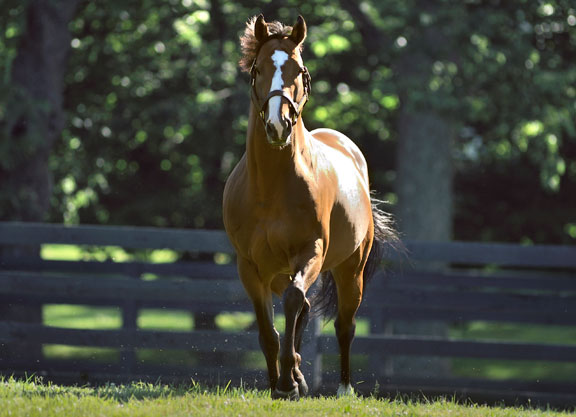 Spendthrift's flagship sire Into Mischief (Harlan's Holiday) is a remarkable stallion. For proof, just look at three of the six Grade l stakes entries at Saratoga on Saturday: he's represented by Owendale and Chess Chief in the Runhappy Travers S.; Mia Mischief in the Ketel One Ballerina S.; and Rowayton in the H. Allen Jerkens S. Presented by Runhappy. Through Thursday, Into Mischief was leading General Sire for the year in North America with progeny earnings of $11,301,547, ahead of Tapit ($10,517,847) in second place and Quality Road ($10,330,841) in third. He stood the 2019 season for $150,000 live foal, but his story is noteworthy because he has made his way to the top the hard way–he's earned it from the bottom up, year by year, despite very little patronage in his first four years at stud.

He'd retired for $12,500 in 2009–not a good time, because it was shortly after the global economic collapse of 2007-200–and was down to $7,500 by 2012, before his first-crop runners, headed by subsequent millionaires Goldencents and Vyjack, put him on an upward trajectory from which he hasn't deviated. That first crop, by the way, had an outstanding ratio of 17% black-type winners to named foals. To date, Into Mischief is represented by 55 black-type winners through eight crops of racing age (including 2-year-olds of 2019) and 23 graded stakes winners. Along the way, he's become a sales darling as well, because he gets well-made Saturday afternoon horses (13 black-type winners and 36 black-type horses to date this year) and high-quality 2-year-olds (five 'TDN Rising Stars' so far in 2019) with metronomic precision.

Spendthrift has done this type of thing before. The farm's elder statesman, Malibu Moon (A.P. Indy), started out even more inexpensively than Into Mischief, at $3,500 in Maryland, and went on to sire a Gl Kentucky Derby winner. But Malibu Moon wasn't a stakes winner, much less a Grade l winner like Into Mischief, and his ascent to the top echelons was surprising despite his top pedigree. Into Mischief's success makes some sense in retrospect because his pedigree has improved dramatically during his run as a sire.

In other words, he was a better stallion prospect than he first appeared to be.

He was the first black-type winner and Grade l winner for his dam Leslie's Lady (Tricky Creek) when he entered stud, but since then she's had his champion half-sister Beholder (Henny Hughes), who was later followed by his Grade l-winning half-brother Mendelssohn (Scat Daddy). As the dam of three highest-level winners (all by Storm Cat-line stallions), Leslie's Lady was named Broodmare of the Year for 2016. She obviously had the right stuff, and she's passed it on to her son.

If Into Mischief had gone to stud with his current pedigree, he'd have been a popular horse from the start and would never have been available for as little as $7,500; consequently, he'd have had more and better mares earlier in his career (his first four crops averaged only 36 named foals), and this could have changed his profile significantly as a sire from the beginning.

Why? Because he'd likely have had the types of mares that would have helped him to get more 1 1/8-mile runners earlier in his career. Those are the horses that have the most Grade l opportunities, make the most money, and have the chances to be on the Classics trail. Into Mischief has only recently been getting more of them as his stature has grown and his mares have improved. Last year, for example, Audible won the Gl Florida Derby at 1 1/8 miles and ran third in the Kentucky Derby at 1 1/4 miles. In Saturday's 1 1/4-mile Travers, note that Owendale was third in the Gl Preakness S. at 1 3/16 miles and is a last-out winner of the Glll Ohio Derby at 1 1/8 miles. Chess Chief, an outsider, appears to want more distance than 1 1/8 miles.

Up until now, Into Mischief has carved his reputation mainly as a sire of fast sprinters and milers. Although he got the 1 1/8-mile Gl Santa Anita Derby winner Goldencents from his first crop, Goldencents was subsequently cut back in distance to a mile and twice won the Gl Breeders' Cup Dirt Mile–a distance that was his true métier. Through the end of 2018 from seven crops, Into Mischief had only three Grade l winners to his credit–Goldencents, Practical Joke, and Audible–but he has picked up the pace and has two others this year, the filly sprinters Covfefe and Mia Mischief. Of his 23 Graded winners, only six–Goldencents, Audible, Maximus Mischief, Owendale, Strict Compliance and Vicar's In Trouble–have won at 1 1/8 miles, and none have won at a distance of more than that; most of his graded winners have won at six and seven furlongs, and some others have stretched it to 1 1/16 miles. This may explain Into Mischief's relatively low output of Grade l winners to date for a $150,000 stallion, but it also points to his quality as a sire that he leads the General Sire list by progeny earnings without significant representation in the most lucrative of races, which are at 1 1/8 miles and up.

With the better mares he's being bred to, it's easy to project that his Grade l output at 1 1/8 miles and up will increase in the coming years. When that happens, his progeny earnings should rise that much more, which means that his rivals on the General Sire list are in for a greater tussle in the ensuing years.

The latest chapter of this impressive stallion's book is just being written. Stay tuned.

Into Mischief is a Storm Cat-line horse through Harlan, who wasn't exactly Storm Cat's best son. Harlan was an average type of stakes sprinter who won only one stakes race from 30 starts when he got lucky as a 5-year-old in the seven-furlong GI Vosburgh, at 18-1. That stakes win, however, gave Harlan an opportunity at stud at Stone Farm, where he sired six black-type winners from 99 named foals; one of them was the high-class Harlan's Holiday, a winner of nine of 22 starts and $3,632,664.

Among Harlan's Holiday's wins were the Glll lroquois S. at two, the Florida Derby and Gl Blue Grass S. at three, and the Gl Donn H. at four. Precocious at two, he won at 1 1/8 miles at three and placed three times in 1 1/4-mile Grade l races at three and four–the Jockey Club Gold Cup, the Hollywood Gold Cup, and the Dubai World Cup–and entered stud at Airdrie in 2004. He was a success from the start, was later acquired by WinStar, and died prematurely at age 14 while on shuttle duty in Argentina.

Into Mischief, who won three of six starts at two and three, including the G1 CashCall Futurity at 1 1/16 miles at two and the seven-furlong Damascus S. at three in 1:20.38, was a member of Harlan's Holiday's first crop and is the main proponent of this line. His son Goldencents, also at Spendthrift, is a promising young sire with his oldest runners only three this year and leads the second-crop sire list.

Another son of Harlan's Holiday, Shanghai Bobby, was the champion juvenile colt of 2012 when he went undefeated through five starts and won the GI Champagne S. and GI Breeders' Cup Juvenile. Like Into Mischief, he had an abbreviated campaign at three–he won once from three starts– but was given every opportunity at stud at Ashford before he was sold to the Arrow Stud in Japan for the 2019 season.
As is so often the case, Shanghai Bobby's best runner, Shancelot, has surfaced since the sale. Exciting and undefeated, Shancelot opposes Into Mischief's Rowayton in the H. Allen Jerkens.

This is another illustration that speed is very much a prominent characteristic of this branch of Storm Cat through Harlan's Holiday, but the versatility that Harlan's Holiday demonstrated on track is evident in his produce as well and suffice to note that his Grade ll-placed 6-year-old gelding Noble Thought is entered in the 1 1/2-mile Gl Sword Dancer at Saratoga on Saturday, giving this line quite a bit of representation across an array of distances and surfaces.

It's almost certain that these versatile traits will become more evident in the Into Mischiefs as well.