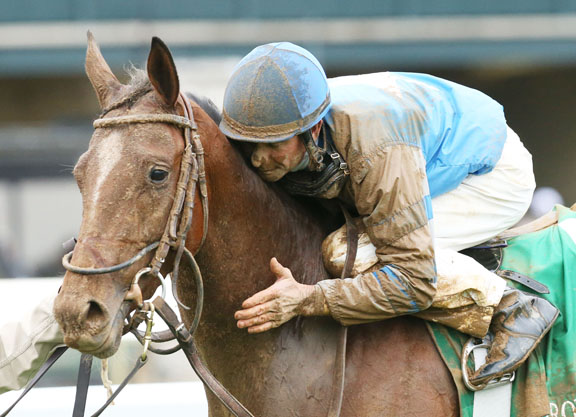 Much has been made lately in Kentucky on farms reducing stud fees in response to the blighted economy, but there's a group of stallions whose fees would have mostly dropped as a matter of course even in booming times. These are second- through fifth-year stallions; frequently, fees for horses entering their fifth season at stud as their first-crop runners turn three show particularly pronounced drops from their initial fees.

A small commercial breeder contacted me the other day to discuss the reduced 2021 stud fee for a stallion whose first crop is racing at two now. She noted how well the stallion matches her mare on pedigree and physique and the 50% reduction in fee from his first year at stud but worried that “his first 2-year-olds are not yet lighting the racetrack on fire, and his sales figures plummeted this year.”

This is a common dilemma for breeders and stud farms alike. Farms need to price fifth-year horses caught in this tricky bubble attractively enough to attract breeders in order to keep both groups in the game on stallions whose long-term viability in Kentucky will be determined in the next year or two. One false move in pricing could spell commercial disaster for one, the other, or both.

And it's not just pricing, either, as I told this breeder. “You'd be breeding in his fifth year at stud. You'll have 5-year-olds, 4-year-olds, 3-year-olds, and 2-year-olds [racing] when you sell [your yearling], so you'd have to really like him, because if they are not successful, it will be tough. And even if they are successful, there's a ceiling [on price] unless he turns into Curlin.”

Stallions with first-crop 3-year-olds next year can change perceptions quickly with a few early-season stakes winners, particularly if they're on the Classic trail, guaranteeing patronage for another year or two by finishing out the season strong with two crops–3-year-old and 2-year-olds–at the races.

Daredevil did some of this in 2020 with Gl Preakness S. and GI Alabama S. winner Swiss Skydiver and Gl Kentucky Oaks winner Shedaresthedevil after a poor run with his first 2-year-olds, but by then he'd already been jettisoned from Kentucky after only four seasons at stud.

However, it's the rare stallion that can carry that momentum forward, because he'll need to do it with mares of decreasing quality in years two, three, and four. Most stallions tend to have their highest output of stakes winners from their first crop, when they get their best mares, and numbers tend to decrease commensurately with a decrease in mare quality.

A strong opinion on a horse, formed by an analysis of facts and an evaluation of price versus the competition, is the best way to approach a fifth-year stallion.

However, Brody's Cause has eye-opening stats versus the competition and at the price.

Both Not This Time and Brody's Cause are each represented by two black-type winners so far–the most among freshman sires, along with Nyquist (Uncle Mo), whose 2021 fee is $75,000; and Outwork (Uncle Mo), who stands next year for $15,000.

As for the quality of his runners, five of his six winners have won maiden special weights while another, the Bob Baffert-trained filly Kalypso, won for the first time in the Listed Anoakia S. Oct. 18 at Santa Anita after placing in two Del Mar maiden special weights. Kalypso, by the way, was a $240,000 Fasig-Tipton Kentucky July yearling.

On the same day of Kalypso's win, the gelding Gospel Way ran second in the Listed Display S. at Woodbine–his second stakes placing after a third in the Victoria S. at the same track.

Earlier this month, Brody's Cause showcased another talented maiden winner. A $185,000 Fasig-Tipton Saratoga yearling for Albaugh and Romans, Smiley Sobotka graduated at Keeneland in his second start in the style of a horse who looks to have a bigger future next year at three. The colt had dead-heated for second in his debut at Ellis over 6 1/2 furlongs but found the mile and a sixteenth at Keeneland much more to his liking.

This brings me to Sittin On Go, Brody's Cause's most accomplished runner to date. A $65,000 Keeneland November weanling and $62,000 Keeneland September RNA, he also races for Albaugh and is trained by Romans. Sittin On Go won his debut at Ellis in a five-furlong dirt sprint by four-plus lengths in mid-August and returned last month in the one-mile Glll Iroquois S. at Churchill to win impressively by 2 1/2 lengths. The runner up, Midnight Bourbon (Tiznow), ran third in his next start in the GI Champagne S. at Belmont, though he was beaten by more than 14 lengths by the leader of the division, Jackie's Warrior (Maclean's Music). However, the third-place finisher in the Iroquois, Super Stock (Dialed In), also came back to place third to Essential Quality (Tapit) in the Gl Breeders' Futurity at Keeneland, less than five lengths behind the winner.

Sittin On Go has solid Grade l formlines, and he will test Jackie's Warrior in the Breeders' Cup Juvenile next.

Brody's Cause has one other stakes horse, Girther. A $2,500 Keeneland November weanling, $4,000 Keeneland September yearling, and $20,000 OBS March 2-year-old, Girther won a Del Mar maiden special weight in July in his second start and came back a month later at the same venue to run a neck second to Weston (Hit It a Bomb, also at Spendthrift) in the Gll Best Pal S.

Brody's Cause won three of eight starts, including the Breeders' Futurity at two and the GI Toyota Blue Grass S. at three, both at Keeneland, and earned $1,168,138. His sire Giant's Causeway doesn't yet have an elite son in North America, but he did in Europe with Shamardal, who died earlier this year. Here, he has the good First Samurai at Claiborne plus several others trying to rise to that level, but in Not This Time and Brody's Cause he's still got his name in the hat with two promising young guns, and who knows?

Spendthrift's flagship horse Into Mischief also started off for $12,500, dropped to $7,500, and is now booked full at $225,000. And the farm's elder statesman, Malibu Moon, began his career at Country Life in Maryland for $3,000 and went on to sire a GI Kentucky Derby winner among many others of note.

My advice to the small breeder looking for value at $15,000 and down? For the price, Brody's Cause is worth the gamble.