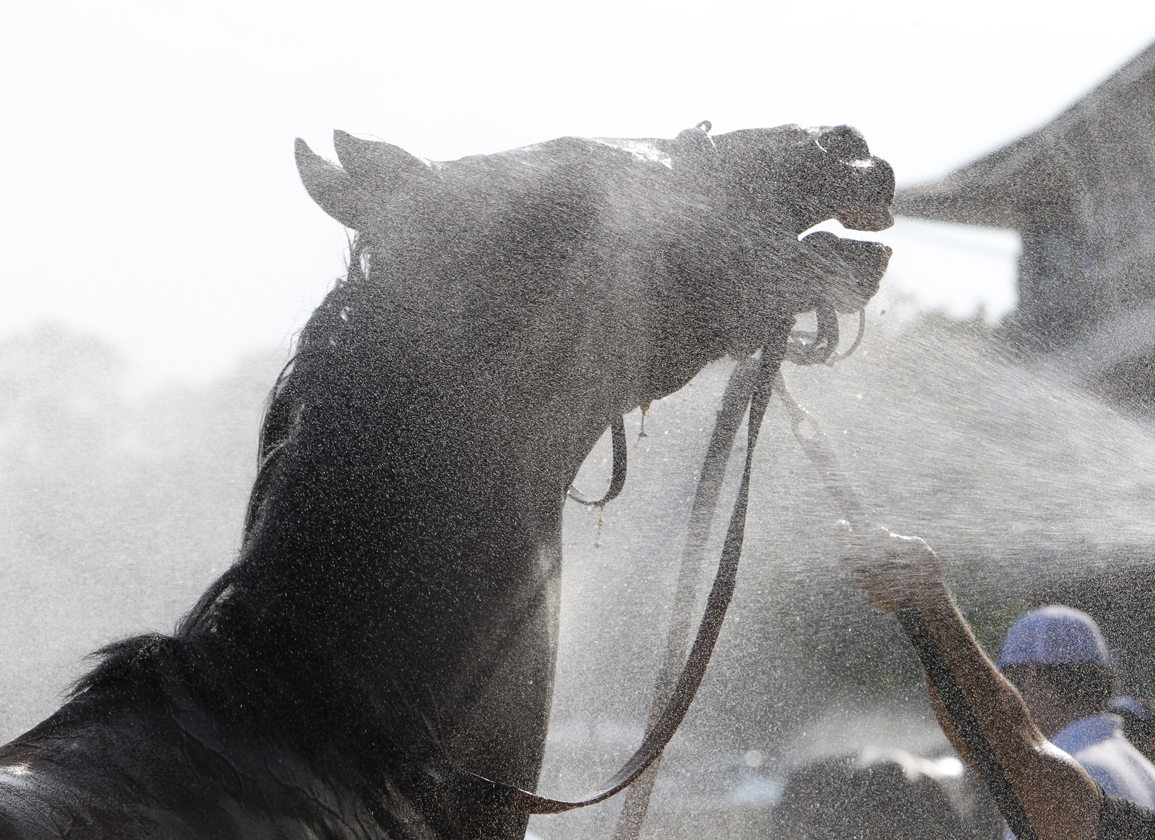 Over the course of three panel sessions Tuesday during the latest Race Track Industry Symposium (RTIP) at Tucson, Arizona, more flesh was publicly added to the bones of the Horseracing Integrity and Safety Act (HISA).

Nevertheless, overall specifics were pretty light on the ground–frustratingly so, for many–with an overarching message that the various medication and safety programs are very much a work in progress.

Indeed, Charles Scheeler, chairman of the Horseracing Integrity and Safety Authority–the broad non-profit umbrella established by HISA and commonly referred to as just the “Authority”–kicked the presentations off by warning that the sport is viewed by many to be in an “existential crisis.”

Highlighting how the U.S. has the worst catastrophic musculoskeletal injury rate among five major global racing jurisdictions–comprising the UK, Hong Kong, Australia/New Zealand and Canada–Scheeler called this a key metric for HISA.

“We have to understand that we've deferred maintenance here,” Scheeler said, of the industry's broad approach to equine health and safety.
Arguably the most salient tidbit Scheeler shared–at least in regards to a practical implementation of HISA—was that individual states will continue to conduct race-day testing and sample collection, if indeed HISA goes into effect on July 1 next year. Initially, the United States Anti-Doping and Agency (USADA) will manage the out-of-competition testing program, according to Scheeler.

However, when the 2023 season rolls around, USADA will then assume responsibility for both race-day testing and the out-of-competition testing program.

Scheeler explained that this staggered implementation allows for a number of key adjustments (which were laid out in a subsequent press release and posted again here):

And who adjudicates any medication violations during this time? Because of staggered implementation, individual states will continue to adjudicate the post-race samples they're charged with collecting, Scheeler explained.

If USADA encounters a violation of the out-of-competition testing program, “they will prosecute that according to the rules they have promulgated,” Scheeler said.

Scheeler also used his presentation to emphasize some of HISA's main selling points, such as a centralized database which identifies trends to reduce fatalities and catch cheats, as well as a “powerful, rigorous investigations program.”

And what about cost? Here, Scheeler didn't have an answer, explaining that the Authority was still working on that, though emphasizing an oft-repeated expectation that HISA will eventually produce economies of scale.

While this constituted the third HISA-related panel of the morning, it had arguably the most practical relevance for the industry, comprising, as it did, information on the everyday drug-testing and enforcement program proposed under HISA.

The panel was led by Jim Gates, director of the Anti-Doping and Medication Control standing committee. Adolpho Birch, committee chair, Scott Stanley, another committee member, along with USADA's Tessa Muir and Jeff Cook, all joined via Zoom.

The bulk of the first half of the presentation constituted a rundown of information that has been made public for a while, including the proposed results management process and an overview of the possible sanctions. Arguably the most salient information came via the public question period, towards the end, even though much sought after specifics were generally left dangling.

Under the new rules, a positive finding might not necessarily be publicly disclosed after the relevant parties have been notified, but when the violation has been confirmed via a B sample analysis. The panelists explained that the trainer and/or the agency have the discretion to disclose the finding before confirmation B sample analysis–especially in circumstances like an upcoming big race–but that the idea is to protect undue reputational damage.

Another key new ingredient to the way medication violations will be handled is the possibility of a sanction for a horse who tests positive–a seismic shift away from the current system.

Under the proposed guidelines, a horse will be automatically disqualified in the event of a race-day violation. But a horse also faces the possibility of a maximum 14-month sanction, depending on the substance and what is described as the “method.”

When asked about the philosophy behind these kinds of sanctions, Gates explained that “in most cases, when a horse is suspended, it is to give time for any medication to clear their system so that they would not have a competitive advantage going forward.”

It should also be noted that a horse can also face a sanction in the event of whereabouts violation. This is the intended system that horses can be tested anywhere and at any time with no advance notice from the moment they fall under the purview of the program until the moment they are permanently retired from racing.

Under the new rules, a whereabouts violation could lead to a 12-month sanction for the respective horse. Just don't expect to see this whereabouts program go into effect immediately, with USADA warning that the practical working logistics need to be hashed out and phased in.

Another key bone of contention among industry stakeholders has been the lack, thus far, of a publicly available therapeutic substance list–in other words, those medications that would largely fall under the “secondary substances” umbrella.

Muir explained that the list is still being worked out. She added, however, that it will use a hybrid model of thresholds and screening limits. Read here for a more detailed explainer of what that difference means. Screening limits, Muir said, will be especially applicable for those substances commonly found in a horse's environment, and therefore a genuine threat of inadvertent contamination.

The panelists also explained that the committee was using as a key reference point the International Federation of Horseracing Authorities' (IFHA) thresholds for therapeutic substances. The IFHA's screening limits for urine can be found here. For blood, it's here.

In other talking points, the panelists explained the reasons behind deviating from the current multiple medication penalty system towards a much more punitive one. The change “allows for more stringent sanctions for those who commit more egregious violations or more frequent violations,” said Cook.

Cook also explained that the new system provides “more discretion to provide proportional sanctions based on the degree of fault of those involved.” Fines are permitted, for example, but not specified because “we want the fine to be meaningful to deter behavior,” Cook explained.

The panelists confirmed that veterinarians could face charges for certain offenses, though failed to provide any specifics.

Similarly, when asked exactly how the National Stewards Panel would work, the panel explained the goal was to employ the most qualified individual available but added scant other details.

Interestingly, when it comes to the education component, the panel explained that the general plan was to have an easy-to-use education module in English and Spanish to be taken by every “covered person.” But once again, it's unclear when that would be implemented and what the education module would specifically entail.

The draft Anti-Doping and Medication Control rules are expected to be submitted to the Federal Trade Commission (FTC) later this month.

The second HISA-related presentation was a Q&A between Sue Stover, chair of the Racetrack Safety standing committee and the one who took the hot seat, with Ann McGovern, the committee's director, asking the questions.

This was a statistics-heavy presentation, with Stover broadly connecting the dots between plans under HISA to start collecting relevant data in a uniform manner and what is already known about the underlying factors predisposing racehorses to catastrophic injuries.

The panelists provided a slide of some of the key ingredients of the accreditation program. The list included:

The panelists warned, however, that accreditation isn't automatic nor assured for any length of time once given.

According to McGovern, “there are processes out there to help the smaller racetracks to get accredited and to learn what to do to meet the standards that are outlined.”

Stover warned, however, that “if a track were to lose accreditation, they will lose the ability to conduct interstate wagering.”
Earlier in the panel presentation, Stover–a long-time UC Davis professor–guided the audience through her research into some of the main factors underlying catastrophic breakdowns in racehorses, such as:

Stover then explained how a key component of HISA's data collection program would be focused on these factors, at the heart of which is this statistic: That 85% of catastrophic injuries in racehorses are associated with pre-existing conditions.

Stover also explained that horses returning from a layoff are at greater risk of injury, and that, under HISA, they would be looking for information that explains what constitutes a good or bad lay-up program.

As such, “We are also asking trainers when they do send a horse for a lay-up period that they submit the training and medical records of the horse for that lay-up time,” explained McGovern.

A member of the audience asked the panel if, ultimately, this kind of data collection would lead to a scenario whereby a trainer, attending veterinarian and owner would have minimal say in a horse's training and racing program.

“That is not the intent,” McGovern replied. “The intent is to give the trainers and the vet the information so they can make the decisions on how they train the horse and how they race their horse.”

The Racetrack Safety proposed rules have already been submitted to the FTC for review, though the public will have the opportunity to tweak the document further during the mandatory public comment period.