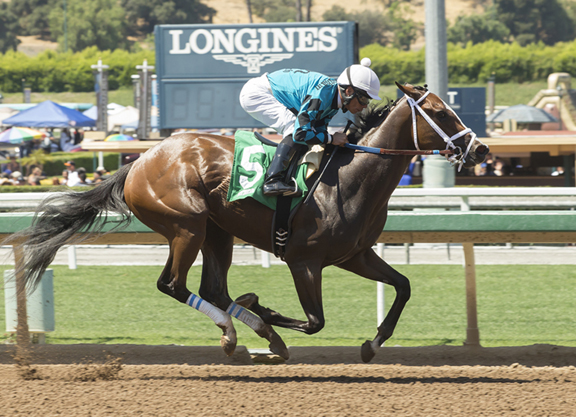 Lloyd was asked to verify if the price topped the $250,000 brought by Felicita (More Than Ready) and he said, “Yes, quite a bit over that. It was an opportunity and a fair price for both parties. Gary [Hartunian of Rockingham] made it possible by being reasonable.”

Lloyd, the former general manager of Barretts Sales, is the principal of Sweetwater Trading Company, who manages the horses for Rockingham Ranch. Surrender Now, who won the 2017 Landaluce S. at Santa Anita and placed in two other black-type events, comes from a stakes-laden family as her fourth dam is Broodmare of the Year Glowing Tribute (Graustark).

“We had put her away, booked her to Speightstown,” said Lloyd. “Our original plan was to sell her [next] November, but we decided to take a chance. We stable our horses at Rose Hill Farm. Tony O'Campo [of Rose Hill] does such a wonderful job; he's a good, caring horseman, so we had him be the consigner.

“We have quite a few horses,” he continued. “We're into racing. We do breed, but we like to race and it was just an opportunity. The market was right. We've built a nice stable and this was a way to keep the cash flow going. We would have never sold our filly without the digital sale, but they came and make an offer and did a fair deal for both of us.

“It's an interesting new process. Everybody gets a chance to market their horse and play in the game. It's really something special. I think in the future we'll see a lot more people utilizing the opportunity with digital sales. They have some wrinkles to work out and they will. We do as sellers too, like how to make our horse more marketable. I like that it is a learning process and new for everybody.”