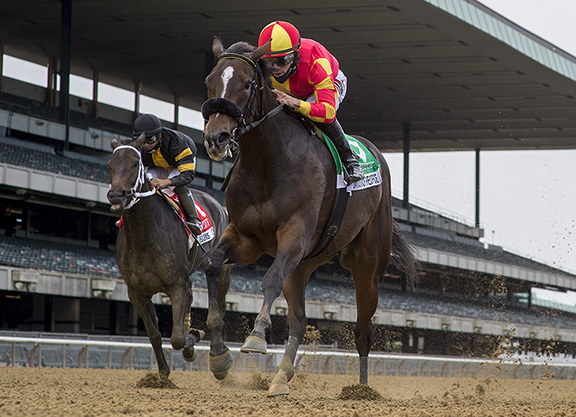 Felicita (More Than Ready), an unraced 4-year-old half-sister to Grade I-winning juvenile and Dayoutoftheoffice (Into Mischief), topped Tuesday's Keeneland December Digital Sale when hammering for $250,000 to Jon Clay's Alpha Delta Stables. The auction, Keeneland's third foray into the nascent online sale marketplace after its June Online Select Horses of Racing Age Sale and October Digital Sale, was seen by leading consignors as a clear improvement while still having kinks that need ironing out as the sector evolves.

Consigned by Taylor Made Sales Agency, Felicita was a $10,000 purchase by Harris Farms last fall at Keeneland November and received a major pedigree update this year when Dayoutoftheoffice streaked to convincing victories in the GIII Schuylerville S. and GI Frizette S. before running second in the GI Breeders' Cup Juvenile Fillies. She was offered in foal to Taylor Made's leading freshman sire Not This Time.

“Felicita is the prototype of what really works in the online environment now,” said Taylor Made Vice President of Sales & Marketing Mark Taylor. “I think that it's going to expand and the online marketplace will gain more traction in the future, but right now what sells is something that has a really current update or something that's going on in the pedigree to create a sense of urgency, like, 'Wow, I need to act on this and get ahead of the curve.' With her being a half-sister to Dayoutoftheoffice, a [potential] Eclipse finalist and on the [GI Kentucky] Oaks trail for next year, from a hot female family with great horses up and down the page and being in foal to Not This Time who's doing so well, that made her unique and created that sense of urgency.”

Additionally, Taylor Made was able to sell 5-year-old mare Song of Melody (Flat Out), also in foal to Not This Time, for $50,000 to Rose Hill Farm in a sale that suffered from a high number of RNA's.

“You can see the results, there were tons of buybacks, but we got another mare sold for $50,000, and that was a fair price, about what we were hoping to get,” Taylor said. “Then a lot of the other mares that didn't get done, we've learned from the online marketplace that if you've got a chink in your armor, it gets magnified by the extra hassle. People aren't just standing around the back ring and seeing horses go through and spontaneously going, 'Well I'm here at the auction, I've got to buy five horses, I'm going to buy this one.' You've got to make the conscious effort to sign up, get your credit, send somebody out to the farm to see the horse, check out everything and [the challenge] is breaking through those mental obstacles that are in people's brains and trying to draw their attention to something.”

Conrad Bandoroff, Vice President of Denali Stud, concurred that updated pedigrees lead to the most attractive offerings in the new world of digital auctions.

“The digital sales platform isn't going away, and there was a mare who sold for $250,000. We're going to see more of this,” he said. “You have the new online platform in Wanamakers, and you can capitalize on immediacy, on a race result or an update.”

Bandoroff and Taylor both agreed one of the issues leading to high RNA rates at the initial online sales is that, due to the relative ease with which horses can be entered digitally compared to the costly effort of physically getting a horse to and through an auction ring, there is less built-in incentive for a seller to complete the transaction online.

“What we're seeing in these early stages is that when people don't have to ship a horse into a sale, pay the bigger entry fee, or pay the expenses that come along with it, maybe their level of expectation is higher than where the market is,” Bandoroff said. “I think this is why you see so many horses who fail to meet their reserve. People are testing the market, and if they can get this number, they'll do it, but maybe they're not getting what they expected.”

“It's a learning experience,” Taylor said. “Keeneland did a nice job of moving the ball forward and trying to make the product better, but it's going to be an evolution and we've still got a long way to go to perfect the marketplace and get it really seamless. The seller also has to be realistic about the price. Sometimes, because people don't have to ship the horse, they'll think, 'Yeah, I'll lob it on there and if I happen to get a premium, I'll take it, otherwise I'm content to just sit tight.'”

Taylor added that improvements to online sales could come in the form of more consistent presentation, and said that the nature of the medium leads to a more challenging, involved selling process for consignors.

“I think from a consignor's point of view, the presentations on the website ranged from very low grade all the way to really good,” he said. “Having more photos, really good videos, clear contact information for how to reach out and get more information on the horse, and then being able to be proactive [would help]. This is not passive selling, it's not throwing them online and hoping somebody bids. It's more like a private transaction, calling people and saying, 'Hey, we've got this horse for sale, it's on the digital marketplace with Keeneland, you need to go check it out.'”

He also said that while it's admirable for a digital sale to contain offerings that fit the lower levels of the market, the evolution of the medium could lead to catalogs of more select offerings.

“From Keeneland's side, this is just my opinion, but if I were them, I'd start with smaller numbers and I would be more selective about what actually went on there,” Taylor said. “I would curate the catalog for things that I thought really would push the buttons of the buying bench out there. It's a good thing about their culture that they're trying to help people at all levels move horses. There were $1,000 horses getting sold on there and that was a service to those people selling the horses. That's to be applauded, but maybe you could separate the auctions that are curated with really nice offerings that check a lot of the boxes. I think we're all learning and Keeneland definitely moved the ball forward from where they were in the summer when they did it. It was a better product, better experience, better promotion, everything was improved. It's going to be evolving and we've all got to learn and adjust.”

Keeneland's January Horses of All Ages Sale, which features 1,588 offerings in its catalog, will take place Jan. 11-14 in Lexington with all four sessions starting at 10 a.m. ET.