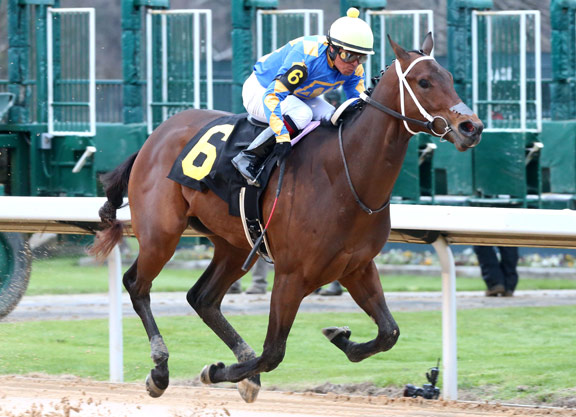 Gold Street earned 10 points towards the GI Kentucky Derby Friday with a front-running score in Oaklawn's Smarty Jones S. Let go at 10-1 in this first try beyond six furlongs, the $150,000 KEESEP buy went straight to the lead under Martin Garcia and loped along through splits of :24.08 and :48.96 with Lynn's Map (Liam's Map) glued to his outside hip. That rival called it quits on the backstretch and 'TDN Rising Stars' Three Technique and Shoplifted ranged up to challenge entering the turn. However, Gold Street still had plenty left in the tank and extended clear to score with ease.

Graduating by seven lengths at fourth asking in the slop at Churchill Downs Nov. 23, Gold Street followed suit with a win in the Sugar Bowl S. over another sloppy surface at Fair Grounds Dec. 21.

Erich Brehm purchased the winner's dam Morakami for $21,000 at the 2017 Keeneland January sale with Gold Street in utero. He bred her back to his GI Breeders' Cup Juvenile winner Texas Red (Afleet Alex), resulting in the now juvenile filly My Girl Red. The 15-year-old mare visited that stallion again the following season, producing another filly, who is now a yearling, and she visited Kitten's Joy last season.