Stradivarius Still A Force To Be Reckoned With 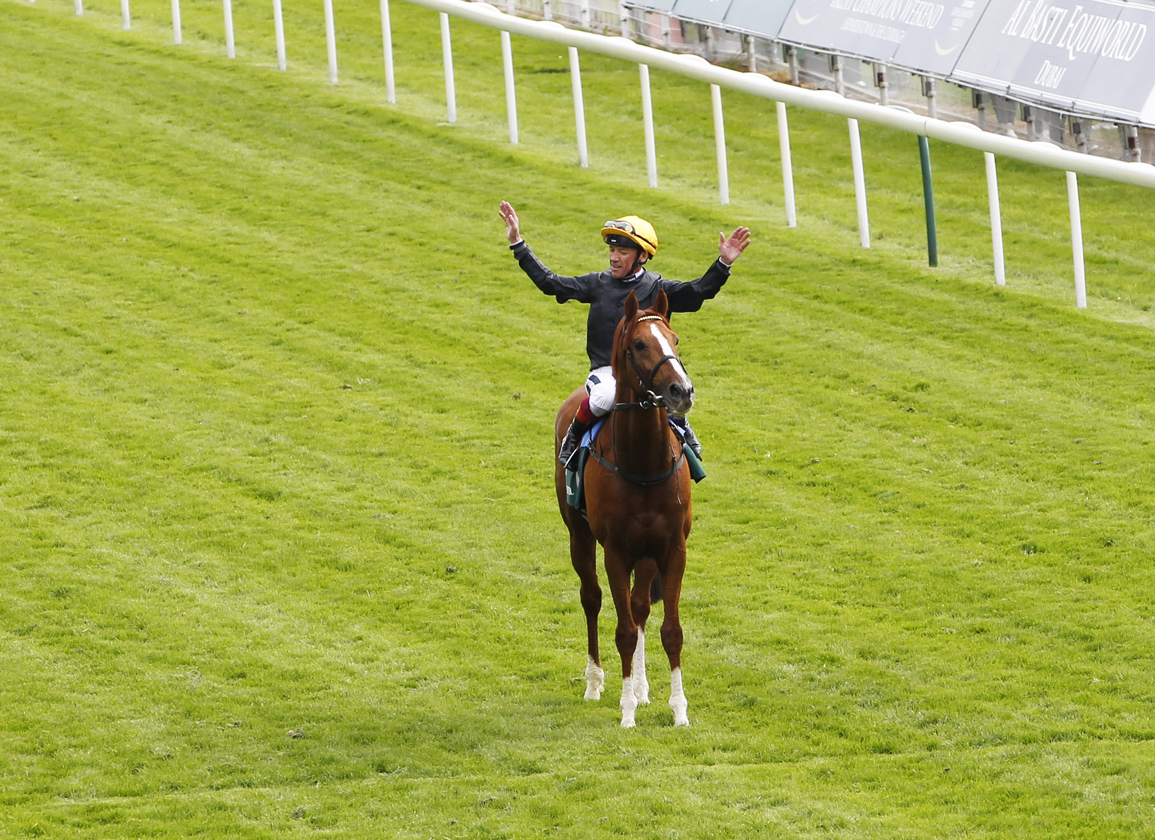 Twenty career wins, 18 in group company. Those that wrote off Stradivarius (Ire) (Sea the Stars {Ire}) had to think again on Friday as Bjorn Nielsen's legendary chestnut popped up to keep his unbeaten tag on York's Knavesmire intact with a third G2 Paddy Power Yorkshire Cup. Travelling with all the gusto of his earlier days, the 6-4 favourite who was largely dogged by unsuitable ground and a dash of bad luck in 2021 sliced between younger rivals heading to two out with the crowd in raptures. Taking the measure of long-time leader Thunderous (Ire) (Night of Thunder {Ire}) soon after, he ended up towards the stands which he has come to own down the years and was clearly idling en route to a snug length success. In doing so, he surpassed the record of group wins in Europe previously held jointly with Cirrus Des Aigles (Fr) (Even Top {Ire}).

“My mouth is a bit dry–I'm emotional,” Frankie said as he prepared to parade the 8-year-old in front of the doting audience on his Yorkshire farewell. “Great. He actually surprised me, as he took me into the race very quickly. He pulls himself up in front, but I had no choice. The Gosdens are master trainers and changed his work and routine to keep him interested, worked him from the front and the back, taken him to different places, just to get him motivated as he's been going on those gallops for six years. I thought we had him fit, but until you try you don't know because he looks after himself. He looked the same as he usually does, travelled with zest and showed a good turn of foot and then he pulls up in front, but we know he does that. I will miss him dearly when he's retired–I'm trying to hold back the tears.”

John Gosden added, “He's totally unique. He was on his hind legs when we were saddling him, every time he saw a filly he started showing off but he came over here and he was a professional as ever. If the ground is not heavy, the plan is to go back to Ascot. It's like Desert Orchid, these horses do capture the imagination because they have longevity. To be the leading group-winning horse of all time in Europe, that takes some doing. Let's hope we can get to Ascot and the ground's not too deep, I think if he had this ground he'd take a lot of beating.”

Listing all of Stradivarius's achievements is unnecessary, but the staggering total of pattern races includes 17 at either this or group 1 level with the only group 3 coming in last year's Sagaro S. when connections changed tack. Whether that decision contributed to his subsequent reversal looking for a fourth Ascot Gold Cup will never be known, but his stable were keen to go back to basics for his preparatory run this time. With better luck in running last June, he possibly would have been second behind the now-absent Subjectivist (GB) (Teofilo {Ire}) and it could be that given his preferred lively surface that is enough in 2022.

His owner-breeder remembers the staying greats all the way back to the likes of Sagaro, Ardross and Le Moss, but was not being drawn on comparisons with his star of the present. “You can never really compare different eras–he might have won a lot more races than them, but they were great and I loved watching those horses when I was young,” he said. “I think what we've done well with him is to keep him running in England and France rather than taking him to the Middle East or Australia. The wheels can come off when you do that and that is why he has endured so long.”

“Everyone wants to stand fast horses now and people get afraid of getting beaten so that they lose value, so the pressure is on to retire but I've obviously never been under as much pressure to retire him. He's probably worth as much in prizemoney than at stud. We're focusing on nothing more than the Gold Cup, especially as he's an eight-year-old,” Nielsen added. “The day will come when he's off the bridle and doesn't do it, so it's one race at a time.”

Stradivarius descends from the richly-talented Wildenstein distaffer Pawneese (Ire), deservedly crowned Horse of the Year in England in 1976 when she was also the champion 3-year-old filly in her native France. Her wins in the G1 Epsom Oaks, G1 Prix de Diane and G1 King George VI and Queen Elizabeth Diamond S. remain the stuff of legend, while her family also includes a chestnut like this winner who also wowed onlookers. Nureyev's Peintre Celebre was the brilliant winner of the G1 Prix de l'Arc de Triomphe in 1997, having already annexed the G1 Prix du Jockey Club and G1 Grand Prix de Paris. Stradivarius was the last foal out of Private Life (Fr) (Bering {GB}), who acted as a vessel for no small measure of this dynasty's magic.

🎻 Stradivarius – he's back & remains unbeaten on the Knavesmire @yorkracecourse @FrankieDettori