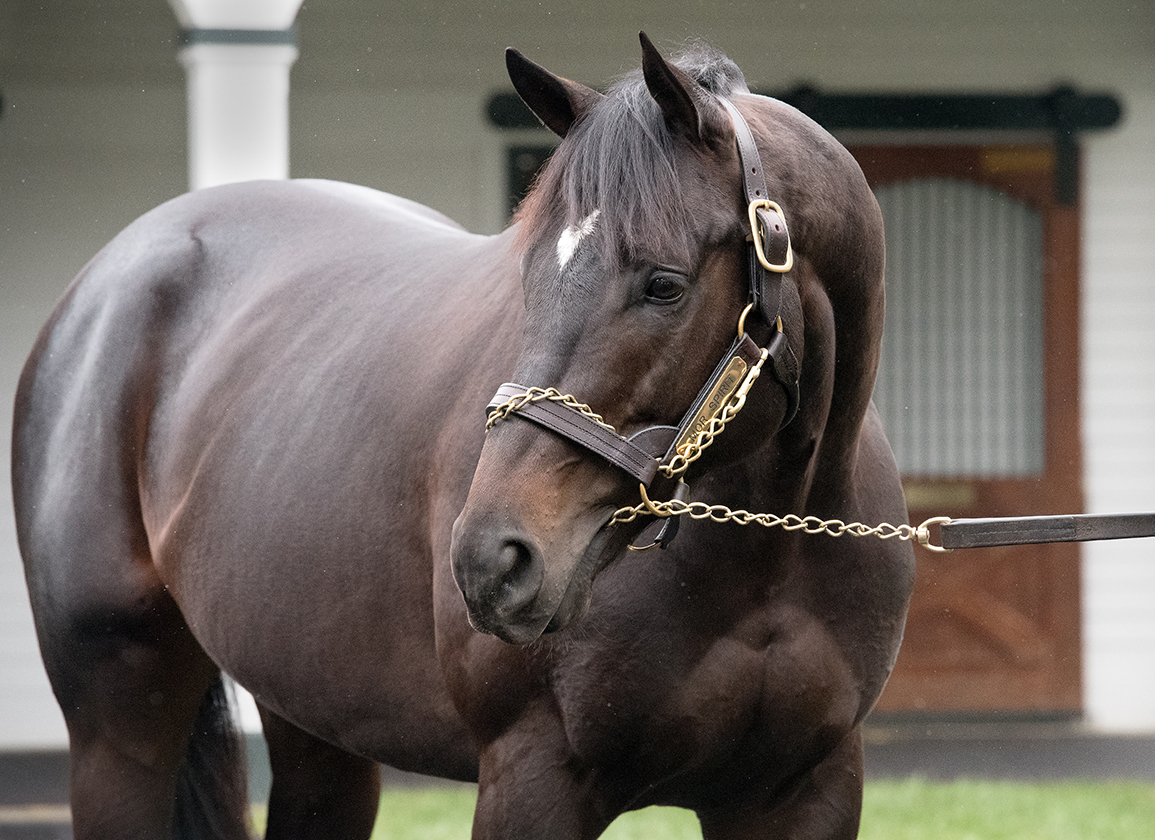 Generally well-represented at most sales venues throughout the yearling season, Spendthrift Farm offers a sextet of homebred youngsters, dominated by the offspring of a trio of the nursery's fledgling stallions, at the Fasig-Tipton July sale, set to take place July 13. And while the operation has reached great heights with its marquee stallions–the late Malibu Moon and Into Mischief–the basis of Spendthrift's program has been largely built upon the continuous replenishment of young stallions offered at affordable fees.

“We want breeding to work for everybody involved,” explained Spendthrift General Manager Ned Toffey. “Of course, we are always looking for the caliber of superstars of the late Malibu Moon and Into Mischief, but we haven't forgotten that Into Mischief initially stood for $12,500 and, in his second year, he stood for $6,500. We also appreciate the fact that good horses can come from anywhere. Fasig-Tipton has always had a long tradition of showcasing new sires and we think this is a great place to try to introduce our young stallions and to show the buyers and the breeders what kind of horses these sires are able to produce. And that is very much what this group of yearlings is there to do.”

Case in point, Spendthrift's stallion roster is represented at the July sale by a pair of Grade I-winning stallions who are represented by their first yearlings in 2021: Mor Spirit (Eskendereya) and Free Drop Billy (Union Rags), in addition to freshman sire Lord Nelson (Pulpit).

Among those represented by first yearlings this season is GI Los Alamitos and GI Met Mile winner Mor Spirit. A $650,000 Fasig-Tipton Florida graduate, he also won the GIII Robert Lewis S. and GIII Sexton Mile. A total of eight yearlings by the sire are on offer in this season's July catalog, and Spendthrift's homebred duo consists of a pair of colts: Hip 44, out of Malibu Cove (Malibu Moon); and Hip 62, out of Palmilla Moon (Malibu Moon). The former, consigned by Eaton Sales, is a half-brother to GSW and GISP Kalypso (Brody's Cause). Out of a full-sister to Grade III scorer Prospective, the Jan. 29 foal is from the extended family of champion North Sider.

“He is out of a mare that is the dam of Kalypso, from the first crop of [Spendthrift sire] Brody's Cause,” offered Toffey. “We think this is an exceptional individual. Physically speaking, this colt takes a backseat to nobody. We think he's very much what buyers will like. He's got good size, but he's not too big. He has very good bone and is correct. He's also beautifully muscled. And he looks very fast. We think he's a horse that will really appeal to buyers.”

Spendthrift also serves up hip 62–consigned by Scott Mallory–the second foal out of 6-year-old Palmilla Moon. A $180,000 KEESEP yearling purchase in 2016, the mare is a granddaughter of the prolific Aletta Maria (Diesis {GB}), who is responsible for Grade I-scoring turfers Cetewayo and Dynaforce, in addition to Grade II winner Bowman Mill. Covering over 300 mares in his first two seasons at stud, Mor Spirit stands for $5,000 S&N this year.

“This colt is very a strong, well balanced and really sturdy individual,” said Toffey. “He has tremendous bone and very athletic. He's just one of those horses who has always done everything right for us. We think he is a very good example of what this sire is throwing.”

Also standing for the same advertised fee in 2021, Free Drop Billy recorded his most important career victory at two, taking the GI Breeders' Futurity. Appearing early in the catalog under the Scott Mallory banner is Hip 5, a filly out of SP Cedar Summer (Souvenir Copy). The Feb. 26 foal is a half-sister to MSW and GSP Populist Politics (Don't Get Mad).

“This is a very fast, athletic looking filly,” Toffey said.

Outlining the sire's attributes, Toffey added, “He is a beautifully made, compact horse. He's a beautifully-bred horse and we're really seeing that in this offspring. He tends to throw more size than he has himself. They have a lot of substance and a lot of bone and classy looking animals. You are seeing the depth of his pedigree come out.”

Hip 91, who also represents the young stallion in this year's catalog, will be precluded from the sale, confirmed Toffey. Out of the Tiznow mare Tiz the Key, the filly hails from the family of European champion juvenile filly Gay Gallanta (Fr).

“We have an absolute monster of a physical by Free Drop Billy out of Tiz the Key that has to come out because of a minor issue coming along at the wrong time,” he said. “But we expect to have her in Fasig-Tipon's October sale.”

A stakes winner at two, Lord Nelson won the GII San Vincente S. the following season, although he enjoyed his best season at four, annexing a trio of Grade I sprints–the Santa Anita Championship, Bing Crosby S. and Triple Bend S. With six yearlings by the sire catalogued for July, Spendthrift is represented by Hip 114, a colt out of Bonita Mia (Warrior's Reward) who is also consigned by Scott Mallory. The colt's unraced dam is out of Miss Simpatia (Arg)–a sister to Argentine Champion Miss Linda (Arg)–making her a half-sister to GI Acorn S. winner Carina Mia (Malibu Moon) and Miss Match (Arg) (Indygo Shiner), victorious in the GI Santa Margarita invitational S. as well as the G1 Argentine Oaks.

“We felt this was a very quick-looking and athletic colt,” stated Toffey. “The pinhookers appeared to do well with the Lord Nelsons this year. And we felt they would be more than willing to go back to the well on him. His 2-year-olds have been very promising so far and we're excited about his chances this year.”

“His horses are really developing beautifully,” Toffey opined. “They are good, medium sized horses that are very athletic and well balanced. And they look quick.”

Rounding out Spendthrift's offering at July are a pair of yearlings by the operation's marquee stallions. Consigned by Four Star Sales, Hip 339 is by the nation's leading sire Into Mischief and out of MSP Anahauc (Henny Hughes), a sister to stakes winners Gangbuster and Dreamcall. Recently deceased sire Malibu Moon is also represented by seven yearlings in the catalog, including Spendthrift's Hip 141. Consigned by Scott Mallory, the colt is out of GSW Daring Kathy (Wildcat Heir).

“Any stud farm is so fortunate when they can get a stallion of the caliber of Malibu Moon or Into Mischief, but you always know that you have to continue to be looking for the next one,” said Toffey. “They don't come along that often. There will be a lot of stallions that are given a shot at stud and that just don't make it, so there are no guarantees. It's an ongoing process to find the next good horse. And any farm that gets a horse like Malibu Moon at all is very fortunate, and you'd like not one but two, but that is very difficult to do so you always have to keep looking. In this game, whether it's stallions, racehorses or mares, you're always looking for the next big horse. And that's what we're trying to do.”