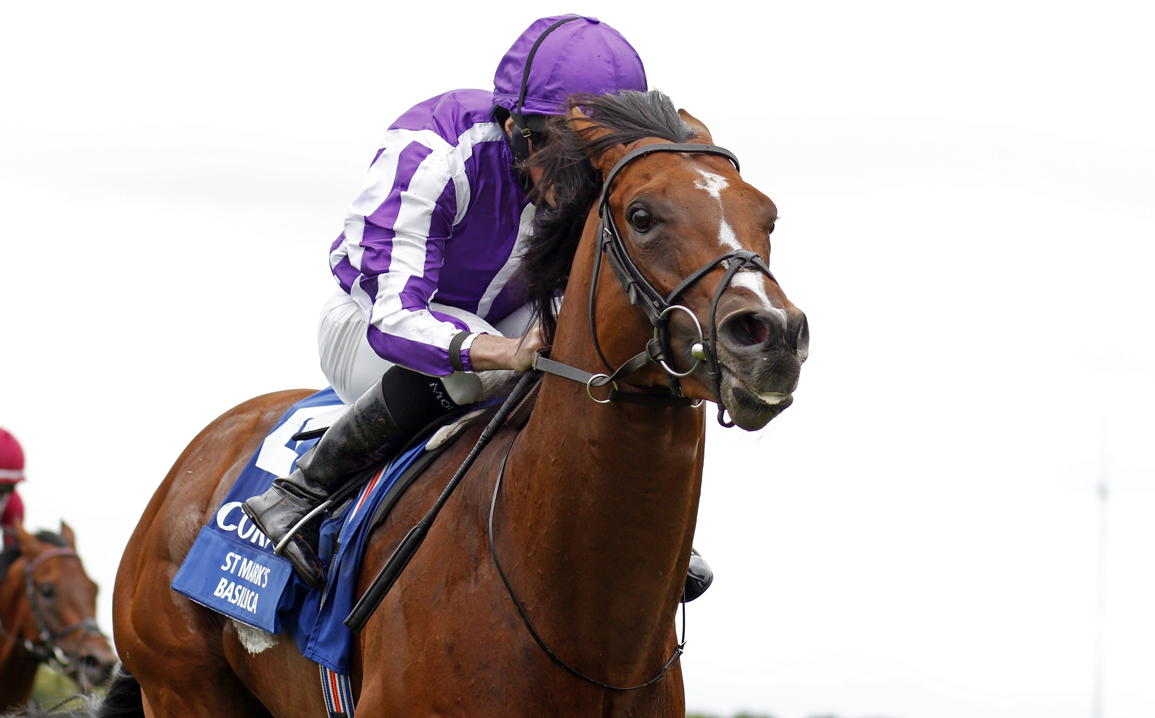 There were only four runners, but what Saturday's G1 Coral-Eclipse lacked in numbers it more than made up for in sheer buzz as the 3-year-old St Mark's Basilica (Fr) (Siyouni {Fr}) was in scintillating form in Sandown's prestige contest. Heavily-backed into even-money favouritism beforehand, Ballydoyle's G1 Poule d'Essai des Poulains and G1 Prix du Jockey Club hero tracked Addeybb (Ire) (Pivotal {GB}) and Mishriff (Ire) (Make Believe {GB}) throughout and when launched by Ryan Moore passing the two-furlong pole quickly subdued his elders en route to an emphatic 3 1/2-length triumph. The long-time leader Addeybb, who had looked held by Mishriff for second for most of the closing stages, came back late to grab the silver medal by a neck but the private battle between two such high-class older runners served merely as a footnote to the real story. Ryan Moore was back where it counts, steering just a second top-level winner in Britain and Ireland for the stable since last August, having seen so many pass him by of late. “I was hugely impressed–he's run against two horses who have proven to be as good as there is anywhere around the world and when I asked him to do his job he picked up and put the race away very quickly,” he said. “He's very exiting. He's a straightforward horse and he's got a very good turn of foot.”

In what will always be remembered as a muddled year due to the knock-on effects of the delay to European racing, 2020 had looked so far as if it would fail to be recalled as anything like a vintage season as far as the juveniles are concerned. One after another of the leading members of that crop had come up short in the prestige races so far this term, with two notable exceptions in St Mark's Basilica and Coolcullen's Mac Swiney (Ire) (New Approach {Ire}). Early indications from the meetings between some smart 3-year-olds and their elders had hinted that the latter category could be in for a dominant year, but St Mark's Basilica ripped up the script here in the biggest test that any 3-year-old had faced so far this year.

Campaigned over six furlongs at The Curragh on his first three starts in the space of four weeks from late July to late August, St Mark's Basilica followed a maiden second with a respectable fifth as the gambled-on 7-2 favourite for the G1 Phoenix S. before getting off the mark back in maiden company. Tackling the quickest ground so far when third to Thunder Moon (Ire) (Zoffany {Ire}) and Wembley (Ire) (Galileo {Ire}) in that venue's G1 Goffs Vincent O'Brien National S. on going officially described as “good” over an extra furlong in September, the bay was denied a chance to contest the G1 Prix Jean-Luc Lagardere due to the much-publicized feed contamination. Rerouted to the G1 Dewhurst S. and back on soft ground at Newmarket in mid-October, he reversed the National form with Wembley and Thunder Moon before returning to scoop both French Classics under Ioritz Mendizabal.

In the May 16 ParisLongchamp and June 6 Chantilly Classics, St Mark's Basilica had given the impression that he was toying with the cream of the French crop but there was a tail swish at the close in the Jockey Club where he also appeared to be either idling or tying up. Any chinks in his armour would be ruthlessly exposed by two such accomplished older rivals here and despite the weight-for-age advantage, the feeling was that he was up against it but the flow of money coming for him on Saturday morning told an entirely different tale. What the bods at Ballydoyle had seen in the build-up to this clash had excited enough expectation to force him into even-money and as soon as Moore angled him around Mishriff halfway up the straight the writing was on the wall. Tom Marquand had done everything in his power to hand Addeybb a tactical advantage from the front, while David Egan looked notably confident soon after straightening for home but Mishriff had no answer to the surging force that subdued him surprisingly quickly.

Aidan O'Brien is set on the major 10-furlong tests for now with his sixth Eclipse winner, who brings him level with Alec Taylor Jr and Sir Michael Stoute. “He's a lovely horse, everything is very relaxed and he's a good mover,” he said. “He quickens and has a great mind–he does everything you want. We felt he had stepped up since the last day and Ryan gave him a beautiful ride. The lads will decide what they want to do, obviously he'd have options of maybe going to York [for the Aug. 18 G1 Juddmonte International] or Leopardstown [for the Sept. 11 G1 Irish Champion S.]”

John Gosden revealed that the Saudi Cup and G1 Dubai Sheema Classic winner Mishriff would re-oppose at York. “He was just a bit keen early, it was his first run for a while and the ground is soft enough for him,” he said. “I expect him to come on a good deal for that. We will head to the Juddmonte at York next, but the winner was very impressive.”

St Mark's Basilica is a son of this stable's G3 Silver Flash S. winner Cabaret (Ire) (Galileo {Ire}), who was purchased by BBA Ireland for 600,000gns at the 2011 Tattersalls December Mares Sale and who had already provided the G1 2000 Guineas hero Magna Grecia (Ire) (Invincible Spirit {Ire}). Cabaret is a half to the G3 Solario S. winner Drumfire (Ire) (Danehill Dancer {Ire}) and the Hong Kong stakes scorer Ho Choi (GB) (Pivotal {GB}) who was also runner-up in the G2 Gimcrack S. The third dam Fife (Ire) (Lomond), who was third in the Listed Lupe S., is also the second dam of the G3 Park S. winner and G1 Moyglare S. runner-up Ugo Fire (Ire) (Bluebird) and is a half-sister to Piffle (GB) (Shirley Heights {GB}). She in turn is the dam of the GI Hollywood Turf Cup hero Frenchpark (GB) (Foolshome) and the G1 Prix Vermeille heroine Pearly Shells (GB) (Efisio {GB}), Haras de Saint Pair's all-important foundation mare who died last month. Cabaret's unraced 2-year-old full-brother to St Mark's Basilica is named Paris Lights (Ire) and will race in the colours of the breeder Robert Scarborough for the Jessie Harrington stable, while she also has a colt foal by Kingman (GB).