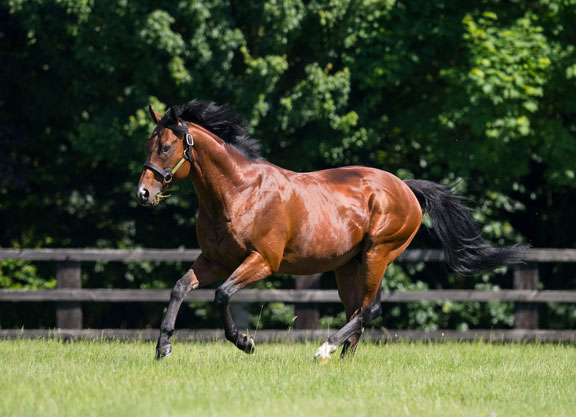 It is only a decade since the most expensive stallion at stud in France was Elusive City at €15,000. Yet to have runners at that stage were Le Havre (Ire) and Kendargent (Fr), who entered stud in 2010, followed by Siyouni (Fr) in 2011 and then Wootton Bassett (GB) the next year. Those are the four names who dominated the French sires' championship in 2020 and can take a large part of the credit for an increasingly dynamic stallion scene in France.

Siyouni, who now commands a fee of €140,000 having started his career at €7,000, is the French champion sire and was second overall in Europe to Galileo (Ire). He had to play second fiddle to Galileo in his home country last year and to an extent that could be put down to what a difference an Arc makes. Galileo sired the 2019 Arc winner Waldgeist (GB), while new Coolmore stallion Sottsass (Fr) enjoyed the biggest day of his career in front of an almost empty ParisLongchamp grandstand in October 2020. He made a huge contribution to Siyouni's overall progeny earnings of just over €4 million—double that of Le Havre—but the Aga Khan Studs stallion had plenty of other winners, 63 in total in France including nine stakes winners and 17 black-type performers in France, with 27 of the latter throughout Europe.

While Sottsass was the stand-out, Siyouni also sired his second winner of the Poule d'Essai des Pouliches, Dream And Do (Fr), who is now in the ownership of Katsumi Yoshida. His reputation farther afield was bolstered by the G1 Dewhurst S. winner St Mark's Basilica (Ire) and GI EP Taylor S. victrix Etoile (Fr).

The 62 winners for Le Havre were led by a filly trained outside France but by a Frenchman. The G1 Prix de Royallieu and G1 QIPCO British Champion Fillies & Mares S. Winner Wonderful Tonight (Fr) is the stable star for Sussex-based David Menuisier and she was a another feather in the cap of her breeders Sylvain Vidal and Mathieu Alex, who have played a major role in the rejuvenation of the French stallion scene at what was originally known as Haras de la Cauvinière and is now Haras de Montfort et Préaux. Now under the ownership of Nurlan Bizakov, the stud has a further name to grapple with this year in Sumbé, the title which now unites Montfort et Préaux with Bizakov's original breeding base of Hesmonds Stud in England.

Le Havre, who was tenth overall in the European table, notched 11 black-type winners in Europe last season included the hugely promising Normandy Bridge (Fr), winner of the G3 Prix Thomas Bryon and runner-up to Van Gogh (American Pharoah) in the G1 Criterium International. A tall colt with plenty of scope, he could be one to put his young trainer Stephanie Nigge firmly on the map in 2021.

Kendargent has been one of the great success stories of the French ranks in recent years. The non-stakes winner who started out at a fee of €1,000, he received significant backing from his passionate owner Guy Pariente, whose Haras de Colleville, near Deauville, has blossomed into a breeding operation of some repute.

Now 18, Kendargent is in danger of being upstaged by his son Goken (Fr), who was France's leading first-season sire of 2020, and Kendargent has also featured as the broodmare sire of several stakes winner by his other Colleville companion, Galiway (GB). His fee peaked at €22,000 and is down to €10,000 for 2021. His leading performer from 63 French winners last season was the globe-trotting Skalleti (Fr), who beat Sottsass when winning the Prix Gontaut-Biron, followed that up by winning the G2 Prix Dollar and was then second to Adeyybb (Ire) in the G1 QIPCO British Champion S.

Wootton Bassett has also been a real success story for French breeding, so much so that he was headhunted by Coolmore last year and is about to serve his first season in Ireland at a fee of €100,000, having stood for as little as €4,000 in this third and fourth seasons. The James Fanshawe-trained Audarya (Fr) followed up her G1 Prix Jean Romanet win with a memorable victory at the Breeders' Cup, while Wooded (Fr) won the G1 Prix de l'Abbaye before being whisked off to stud himself. There were also close calls for Wootton Bassett's offspring in the French Classics: his daughters Speak Of The Devil (Fr) and Mageva (Fr) were second and third in the Poule d'Essai des Pouliches and The Summit (Fr) was runner-up (Ire) in the Poulains.

The winner of that race, Victor Ludorum (Ire), helped his late sire Shamardal to a fifth place in the French sires' table, his 10 black-type winners including the Aga Khan's classy Tarnawa (Ire) and Pinatubo (Ire), winner of the G1 Prix Jean Prat.

Rajsaman (Fr) is another to have left France and is now at Ireland's Longford House Stud but he still sires plenty of winners in his native country, with 60 last year, to put him in sixth place.

The aforementioned Goken was not only leading first-season sire in France but also the country's leading sire of 2-year-olds, with his 15 winners putting him three ahead of Siyouni in the juvenile category.

Leading sires in Germany
That Sadler's Wells is a major influence is hardly newsflash material. His reach in Germany is predominantly through one of his lesser-heralded sons, the late In The Wings (GB), whose best sire son, arguably, was Singspiel (Ire). The German ranks are headed by two of his other sons, Adlerflug (Ger), who is champion for the first time ahead of Soldier Hollow (GB), the title holder in the previous two years as well as in 2016.

Physically they are chalk and cheese. Adlerflug, a tall, flashy chestnut, is a product of Germany's oldest stud farm, Gestut Schlenderhan. Meanwhile, the diminutive bay Soldier Hollow, was bred in England by Car Colston Hall Stud and has spent his stud career initially at Gestut Rottgen before moving to Karl-Dieter Ellerbracke's Gestut Auenquelle in 2012, whence he has been Germany's busiest and most expensive stallion for a number of years. Incidentally, Soldier Hollow's owner Helmut von Finck, who has had notable success with his offspring, has commissioned a video to celebrate the stallion's 20th birthday, which can be found here.

Adlerflug covered 39 mares in 2020 and he really is a stallion who should be taken more seriously outside Germany. For a start, he is bred very similarly to Galileo (Ire): beyond the Sadler's Wells top line they share a third dam, Anatevka (Ger), with Adlerflug's grandam Alya (Ger) being a full-sister to Allegretta (GB).

Ranking 20th overall in the European sires' championship with markedly fewer runners than all the stallions above him, Adlerflug was responsible for the first two home in the G1 Deutsches Derby, Schlenderhan's In Swoop (Ire), who was subsequently runner-up in the G1 Grand Prix de Paris and G1 Prix de l'Arc de Triomphe, and Torquator Tasso (Ger), who went on to win the G1 Grosser Preis von Berlin. A rare runner for him in Britain in 2020 was the William Haggas-trained juvenile Alenquer (Fr), an easy winner on debut at Newbury who followed up with second in the listed Ascendant S. and looks a colt to follow in 2021.

Alenquer is out of a mare by former German champion sire and classy sprinter Areion (Ger), a veteran son of Big Shuffe (Ger) who was third in the table in 2020 and, now 25, has spent the last three seasons at Gestut Etzean.

Among the younger stallions to note is Gestut Ohlerweierhof's Isfahan (Ger), the leading German-based first-season sire in 2020. Like Adlerflug, he is a former winner of the Deutsches Derby, and from his 10 runners in 2020, five were winners, including Isfahani (Ger), who won the G3 Premio Guido Berardelli on debut in the colours of her sire's owner Stefan Oschmann of Darius Racing. Isfahan should be expected to make a bigger impression with his first 3-year-olds, and the same can be said for Gestut Rottgen's Melbourne Cup winner Protectionist (Ger), the lone son of Monsun (Ger) remaining at stud in Germany.