Home » Archive » Europe » Nigge On The Bridge For International Success

Nigge On The Bridge For International Success 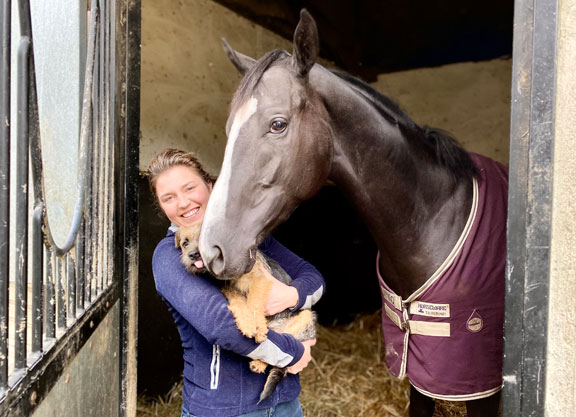 DEAUVILLE, France—Stephanie Nigge may have been born and bred in Deauville, the town in which she now trains, but she has travelled a long way to get there. And in many ways, her two major patrons reflect both her roots and her stints on the international racing circuit.

Gerard Augustin-Normand, one of France's biggest owner-breeders and a fellow Norman, has had a long association with the Nigge family, having initially had horses in training with Stephanie's father Markus, who also trains in Deauville. Augustin-Normand now has 10 horses in training with Stephanie, as does Australian Gerry Ryan, whose most notable previous association with a French-trained runner was as the co-owner of top stayer Americain (Dynaformer).

On Saturday, the 33-year-old Nigge will saddle her first Group 1 runner when Normandy Bridge (Fr) (Le Havre {Ire}) lines up for the Criterium International at Saint-Cloud. Given the name and the sire of the colt, it would be easy to jump to the conclusion that he races in the colours of Le Havre's owner Augustin-Normand, but in fact he is owned by Ryan and was selected for him by fellow Australian John Foote at last year's Arqana October Sale. Bred by Haras du Mezeray and Ecurie Skymarc Farm, Normandy Bridge was bought for €80,000 and is unbeaten in his two starts to date. He has already had a positive experience on the Saint-Cloud turf through his victory in the G3 Prix Thomas Bryon earlier this month.

It was through the 2010 Melbourne Cup winner Americain that Nigge first met Ryan, when she was working for the horse's trainer Alain de Royer Dupre.

“I had worked a while in Germany for Christian von der Recke and then I spent a winter in Dubai for Mario Hofer before going to Alain de Royer Dupre for three years,” recalls Nigge, whose parents Markus and Sabine are both German. “Americain arrived around the same time and I had the chance to travel with him. I stayed with him for a year in Australia when he was with David Hayes and then I took him to Calumet Farm to say goodbye.”

She adds, “I was 23 at the time and was on my own in Australia, so Gerry and his family took me for lunches and dinners and really looked after me.”

Five years ago, Nigge started training in partnership with her father before taking out a licence in her sole name in February, a month before France went into lockdown. Her father is now assisted by her brother, Daniel.

“When racing stopped I was just wondering how I was going to survive the year,” she says. “Thank God I had Mr Ryan and Mr Augustin-Normand as owners. They left the horses in the yard and they have been very supportive.”

Nigge has been swift to repay that support. Normandy Bridge may be the flagship horse of her stable but she has also been in the winner's enclosure this season with Ryan's Zealandia (Fr) (Sea The Moon {Ger}), while the current good form of her stable was highlighted at a sundappled Deauville on Thursday when two Augustin-Normand runners, both by Le Havre, acquitted themselves well on debut. Millebosc (Fr) got the better of Godolphin's Mond (Ger) (Sea The Moon {Ger}) to win the opening Prix de Saint-Desir, while the filly Vrigny (Fr) ran home in eye-catching fashion to take second in the Prix d'Hotot-en-Auge. Both will now be put away ahead of their 3-year-old campaigns.

For Nigge, training in Deauville isn't just a good excuse to come home but it also offers her a number of additional benefits, not least the fact that her stable, with its pair of goats roaming free among the boxes, is, for anyone with a good pitching arm, a stone's throw from the racecourse.

“I was born here and I like to take my horses to the beach,” she says. “I worked in Chantilly, which is a great training facility, but for me I like to train on the racecourse. I think it is good for the horses to learn to breathe on the final turn, and to change legs, and I think it's much easier to do that on the racecourse. We are all struggling to find good riders and when you train on the track the horses do it on their own. In Chantilly you train in straight lines, and it is beautiful, but if you don't have the experienced riders who can help the horses to change their legs and to take a breath it is not so easy.”

She continues, “The fact that we have all the big studs around here also means we can spell the horses. There is racing now from 1 January to 31 December and for me I feel the horses need at least four weeks off every year. We have 100 race days a year in Deauville, so there is nearly one day of racing for every three or four days. We really focus on the meetings in Deauville so we don't have to travel too much, and there are races for every class of horse here. It's so easy to go from my stable to the races.”

It is also easy for her to get to the sales. Our interview is conducted on the final day of the week-long Arqana October Sale where Normandy Bridge was unearthed by Foote last year. Nigge, who race-rode for several years, had already ridden out with her string before walking around the corner to try to find her next star among the current batch of yearlings.

Her mind can't help but wander to Saturday afternoon, however.

“It's a big day for all of us,” she admits. “I was planning not to run him in the Group 1 but he is so well—in fact he was so much better after the [Prix Thomas Bryon] than he was before. For me, this is a race to prepare for next year because though he has won twice he has never really had much competition.”

Following his purchase last October, Normandy Bridge was broken in by Philippe Prevost-Barratte and joined Nigge's stable before Christmas.

“We saw quickly that he was a great mover,” she says. “He is a big horse so we took our time. He had a light canter or two on the grass in the spring but we didn't really work him. By August we felt he had matured a little and so we gave him three gallops and I nominated him for the Prix de Fontenoy at Longchamp. He hadn't really had that much work for that but I know my horses and first time out they are very relaxed. They tend to wake up a bit for the second race so I wanted him to stay at the same distance [1,600 metres]. My jockey [Theo Bachelot] had walked the track beforehand and said that the outside was firmer than inside. I asked him to take his time and if he had enough petrol left to go on the outside. He went wide and he just flew home.”

Despite such a major race looming, the trainer's thoughts are also already straying into next year, and she has plenty of options with Normandy Bridge whom she feels will “stay for sure”. In many respects, the Criterium International is merely the next stepping stone for the colt who potentially has a big future but so far little experience.

Nigge says of his 3-year-old campaign, “He will run first time probably in April and maybe we would have to educate him all over again. On Saturday we have barrier two and I want him to be among the field and in competition with the others to prepare him for next year. If he's very good, as we think he is, he probably will have one or two races before a big one—I don't know if we will go for the Guineas or the Derby.”

Winning a Classic in her home country is doubtless high on the young trainer's wish list, but she has also the desire to revisit some of the countries she has experienced on her racing travels.

“My parents are the first generation in my family to be involved with horses. Forty years ago they came here and couldn't speak any French. They were both just passionate about horses,” she says. “I have had the chance to travel a lot so I have picked up little things from everywhere that I think help me in what I am doing now.”

She continues, “The first horse I bought, Treviere (Fr), was for Mr and Mrs Colin Bamford and Mr Ryan, the same owners as Americain. I took him to Australia for the G1 Toorak H. and he finished second. That was my first runner, though I didn't have my training licence so he ran for my dad.

“I have also been to Dubai with horses for different trainers. I love travelling and I am really keen to travel my horses.”

In the meantime, however, the clients have travelled to her, and a first Group 1 winner for a major Australian owner would do Nigge's international profile no harm at all.