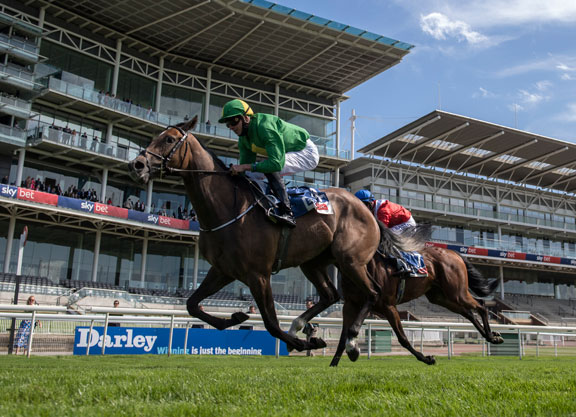 Having beaten Frenetic (Ire) (Kodiac {GB}) in the Listed Marwell S. over five furlongs at Naas Aug. 3, Miss Amulet (Ire) (Sir Prancealot {Ire}) was one of the main contenders for Thursday's G2 Sky Bet Lowther S. at York and she lived up to the billing when holding off Sacred (GB) (Exceed and Excel {Aus}) in a pulsating finale. Always prominent, the 15-2 shot was marginally ahead approaching the furlong pole before being joined by that 15-8 favourite soon after. Pulling out extra for James Doyle in the run to the line, the latest juvenile talent from the Ken Condon stable had a length to spare over that G2 Queen Mary S. runner-up at the line, with Umm Kulthum (Ire) (Kodiac {GB}) 3 1/4 lengths behind in third. “She had experience and that definitely counted today–she knuckled down well late on,” commented Doyle, who had ridden Sacred on both her previous starts. “I know the runner-up has got plenty of ability and I was slightly worried, especially with my filly going up in trip but she's really battled hard.”

Miss Amulet started out in the five-furlong maiden won by TDN Rising Star More Beautiful (War Front) at Naas June 8 and was seventh and one place ahead of the subsequent G2 Airlie Stud S. winner and G1 Phoenix S. third Aloha Star (Ire) (Starspangledbanner {Aus}). Fourth next time over 164 yards further at Navan June 23, the grey left that form behind when scoring by five lengths back over five at Cork July 5 before running second to Measure of Magic (Ire) (Kodi Bear {Ire}) at Down Royal July 24. Reversing that form as she captured the Marwell, this was the furthest she had been asked to race but as Sacred dragged her into battle in the final 100 yards she gave generously to add to the stable's G2 Railway S. success courtesy of Laws of Indices (Ire) (Power {GB}).

“I love her attitude and she's clearly still improving–I don't know where she'll stop,” Condon said. “She took all the travelling well, which is a bonus, and she's really progressive. We'll be looking at the [G1] Cheveley Park now, why not–let's see where she ends up, when these fillies are improving you never know. I've had runners in this race before so it's great to win it, it carries huge prestige. We have a lovely team of two-year-olds this season and the wonderful part of it all is none of them cost a great deal. This filly cost less than £8,000, so it's a great story.”

Sacred's trainer William Haggas said, “She ran a good race, but didn't quite last out. I'm sure Exceed and Excel's prefer top-of-the-ground, but I don't want to take anything away from the winner. I thought she ran a solid race. My first reaction is to go back to five furlongs for the [G2] Flying Childers at Doncaster and take it from there.”