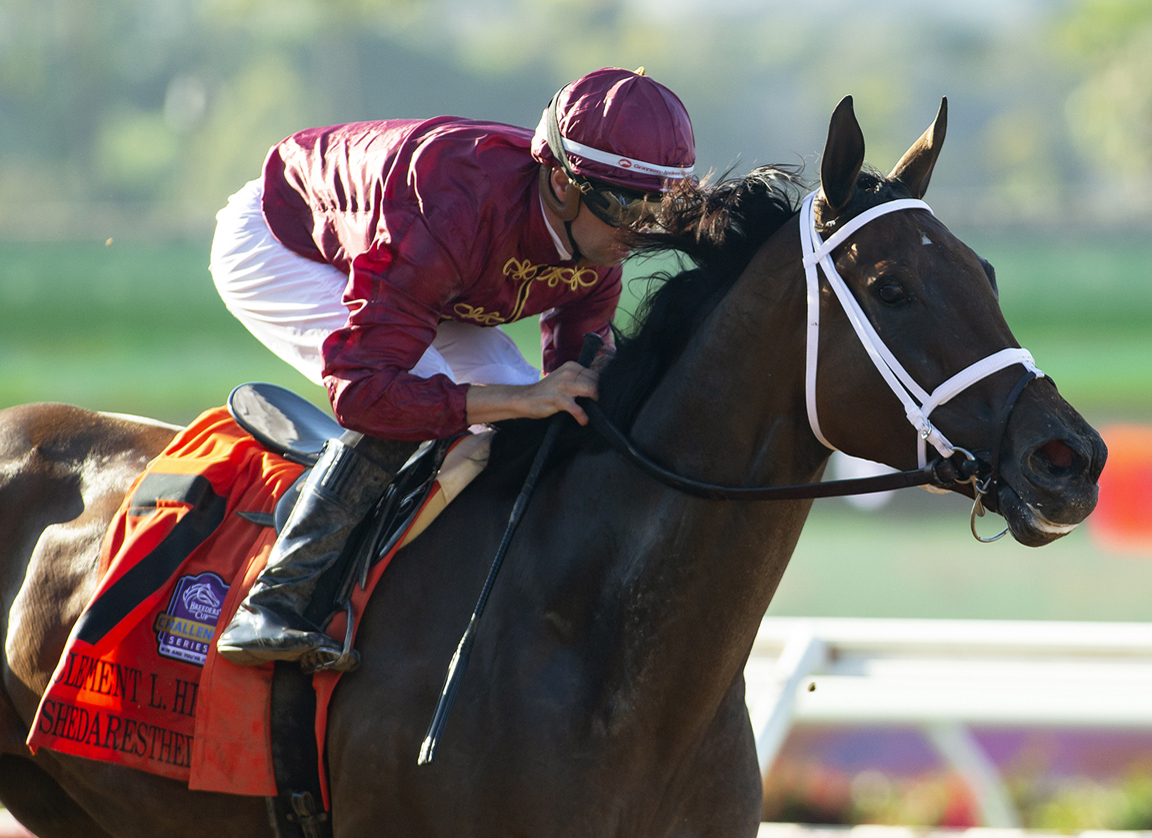 Shedaresthedevil (Daredevil) sat off a quick early pace, pounced at the five-sixteenths pole and edged clear in the lane to capture the GI Clement L. Hirsch S. Sunday at Del Mar, punching her ticket to the GI Longines Breeders' Cup Distaff in the “Win and You're In” qualifier with her third Grade I victory.

Bought into by Qatar Racing out of a debut victory for Norm Casse in June of 2019 and transferred to Simon Callaghan, the bay went winless in three subsequent starts as a juvenile, but still hammered for $280,000 at Keeneland November that fall with Sheikh Fahad's outfit keeping an interest. Returning for Brad Cox the following season, she captured the GIII Honeybee S. and GIII Indiana Oaks before famously upsetting future champions Gamine (Into Mischief) and Swiss Skydiver (Daredevil) in the GI Longines Kentucky Oaks last September. A beaten favorite when third in the GI Juddmonte Spinster S. to conclude her sophomore campaign, she returned to the races with tallies in the GIII Azeri S. and GI La Troienne S. before running third in the GI Ogden Phipps S. most recently June 5 at Belmont.

Made the narrow favorite against four rivals in this first California try since her days in the Callaghan barn, Shedaresthedevil was away well from her outside stall and a bit keen early, but soon settled under Florent Geroux to allow Venetian Harbor (Munnings) to skip clear through a quick :23.30 quarter. Longshot Paige Anne (Take Charge Indy) did a bit of her dirty work as she moved up inside to pressure the pacesetter through a :47.11 half. That rival soon dropped away, however, leaving the mantle to the favorite and she obliged, drawing alongside Venetian Harbor as three-quarters went up in 1:11.77. Taking over within a handful of strides after that, she briefly had to spar with the frontrunner, but took charge while shifting in at the eighth pole and didn't face an anxious moment from there, hitting the wire 2 1/2 lengths to the good. Venetian Harbor held for the place. Paige Anne completed the trifecta, while second choice As Time Goes By (American Pharoah) finished a non-factor fourth.

“I'm very pleased,” said Geroux. “The idea was to get her to break alertly, then get a good spot. That's exactly what happened. She ran her race today and she's very good when she does. I'd have to say she's up there with the best mares I've ever ridden. This is her third Grade I win, and the fact that she showed she can run well on the track where the Breeders' Cup will be held, that's a good thing, too.”

Pedigree Notes:
One of six stakes winners and two graded winners for repatriated Daredevil–the other being fellow multiple Grade I winner Swiss Skydiver–Shedaresthedevil is easily the most accomplished of four foals to race out of Starship Warpspeed. Her unraced second dam is half to Crafty C. T. (Crafty Prospector), a Grade II winner who also placed in six Grade I events. Herself only a $39,000 2-year-old purchase, all six of Starship Warpspeed's foals to sell at auction went for six figures, including an unraced 3-year-old Outwork filly named Jemison who sold for $150,000 at Fasig-Tipton July and a juvenile Speightster filly named Blackheartedgypsy, who hammered to Shedaresthedevil's co-owner Flurry Racing Stables for $350,000 at Keeneland September in the wake of her Oaks success. She also has a yearling Exaggerator filly and dropped a colt by Uncle Mo Mar. 26 before being bred back to that superstar sire.