Sam-Son To Disperse of Racing and Breeding Stock 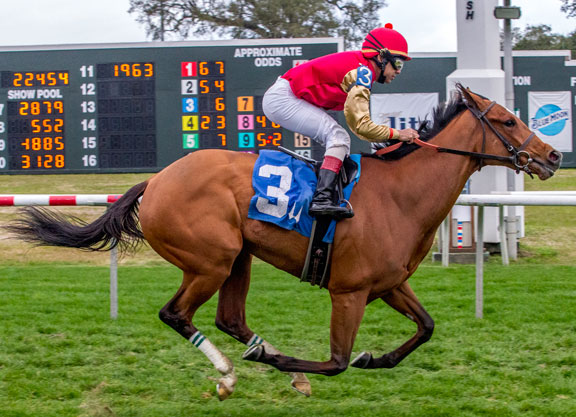 Sam-Son Farm, whose Thoroughbred racing and breeding operation dates back to 1972 and is considered a pillar of the sport in Canada, will be dispersing its stock over the next 18 months, primarily through public auctions handled by Keeneland and Fasig-Tipton.

The liquidation of racing and breeding stock was announced via press release Oct. 28. Sam-Son executives did not cite a specific reason beyond saying in a prepared statement that:

“After serious consideration and discussion, the owners have unanimously decided to initiate an orderly dispersal and to step back from active participation in the racing and breeding world.”

The fate of Sam-Son's two equine properties–a 200-acre breeding and foaling farm in Milton, Ontario and 160-acre training facility in Ocala, Florida–were not addressed in the press release. Nor was the status of the operation's employees.

A voicemail message left for Sam-Son's Ontario farm manager, Dave Whitford, did not yield a return phone call prior to deadline for this story.

Sam-Son Farm has bred and raced 12 horses who made it into the Canadian Horse Racing Hall of Fame. The stable's iconic red-and-gold silks were carried by five Queen's Plate S. winners, two Breeders' Cup winners, and 14 Grade I winners overall. The operation has garnered 84 Sovereign Awards and won four Eclipse Awards, including a pair of 2019 Sovereign Awards for Owner and Breeder of the Year.

Both Ernie Samuel, who founded Sam-Son and ran it until his death in 2000, and his daughter, Tammy Samuel-Balaz, who led the farm until her own passing in in 2008, are enshrined in the Canadian Horse Racing Hall of Fame as “Thoroughbred Builders.”

Sam Son's press release is billing the liquidation as a “rare opportunity for buyers to acquire world-class racing talent and breeding stock from one of the true breed-to-race operations in the business.”

The dispersal will begin at the upcoming Fasig-Tipton November Sale with two racing/broodmare prospects and two in-foal mares. Sam-Son will present its remaining (currently 21) in-foal mares at the Keeneland January Horses of all Ages Sale.

The Samuel/Balaz families commented jointly as follows: “We are enormously proud of the quality and longevity of Sam-Son Farm and have enjoyed nurturing and celebrating every stage of the equine cycle from breeding, to raising, to racing, to retirement and often, returning to the breeding shed. Our horses have given generations of our family such fulfillment and excitement over the years and we felt that the time had come, after five decades, to now share that legacy with the world. It was a bittersweet decision but one that we are committed to pursuing with integrity, transparency and respect. Our horses and our amazing, dedicated employees deserve no less.”

The great-grandson of a steel-and-aluminum magnate, Ernie Samuel started Sam-Son in the 1960s, initially as a hunter/jumper stable that quickly competed at the Olympics level, with one of its horses a member of the Canadian Equestrian Team that won gold at the 1968 Games.

With Thoroughbreds already in the barn as sport horses, Sam-Son transitioned to racing shortly thereafter, claiming a filly named Takaring at Fort Erie who would go on to be Sam-Son's first stakes winner.

In 1975, Samuel purchased two yearlings, No Class and Loudrangle, at the Canadian Thoroughbred Horse Society sale. Over the next four decades, those two fillies became the foundation of the Sam-Son broodmare band. According to the farm's website, more than half of the mares currently in Sam-Son's band are descendants of No Class.

Sam-Son bred and raced champion Dance Smartly, the first Canadian-owned and bred horse to win a Breeders' Cup race (the GI Distaff), and who, in her undefeated 3-year-old season of 1991, became just the second filly in history to win the Canadian Triple Crown.

Boyd Browning, Fasig-Tipton's president and chief executive officer, said, “Sam-Son Farm has been an iconic name in Thoroughbred racing and breeding for nearly half a century. This program has produced numerous Grade I winners, champions and Hall-of-Fame racehorses. Sam-Son horses have had a profound influence in top pedigrees around the world and will continue to do so for many generations. Although saddened to see them dispersing their Thoroughbred holdings, we are honored to assist them in this process.”

Shannon Arvin, Keeneland's president-elect, said, “Keeneland and Sam-Son Farm have enjoyed a long, successful relationship. Over the years, a number of Sam-Son horses have raced here, and the farm received the prestigious Keeneland Tray during the 2005 Spring Meet to recognize its graded stakes success-a milestone that only 20 owners have reached in track history. We are privileged that Sam-Son has entrusted Keeneland to offer this distinguished group of mares at the January Sale.”

Sam-Son has been a seller at public auctions only peripherally through the years. It sent a consignment of five to the 2009 Fasig-Tipton Saratoga select yearling auction, but for the most part has limited its offerings during the past decade to small consignments at all-ages sales to cull broodmares that no longer fit the program.

That changed last September at Keeneland, when Sam-Son offered six yearlings, selling two fillies by Curlin and Empire Maker for a total of $380,000.

In a Feb. 27, 2020, pre-pandemic article published in Canadian Thoroughbred that profiled Sam-Son as a “Top 25 Influencer” in Canadian racing, Balaz, the farm's president, was asked what needs to change about the industry in the next five to 10 years.

“To speak from our perspective, one of the biggest challenges is that the game is becoming unaffordable for the average horse owner,” Balaz replied. “It's very difficult from a financial perspective. I don't know how you overcome that based on the world we live in. You have to be in it for the love of it-which is a great thing-but it used to be easier for a smaller guy to be involved. Now that's becoming much more difficult. I don't know how that gets reversed and we get back to the point where more people can be involved in the game.”