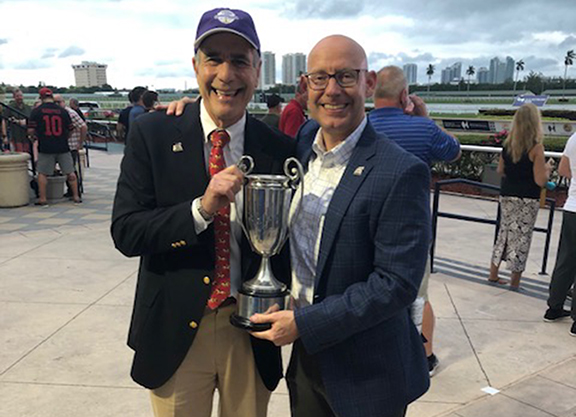 Roger Sofer, a partner in the Sackatoga Stable syndicate that owned GI Belmont S. winner Tiz the Law (Constitution), passed away Wednesday after a bout with leukemia. He was 71.

Sofer, a Houston resident, received the diagnosis that he had leukemia in March 0f 2020, right about the time that Tiz the Law was emerging as one of the leading contenders for the GI Kentucky Derby. He began treatment immediately, undergoing chemotherapy seven days a week. He was let out of the hospital just in time to watch Tiz the Law win the GI Florida Derby, getting home about an hour before the race.

With Tiz the Law continuing to flourish, Safer had found something to take his mind off of his fight against leukemia.

“Tiz has been great because he gives me something else to think about,” Sofer told the TDN in September. “The Houston press has been really good to me. My story has been in the papers here quite a bit. They got all the clippings up in the unit at the hospital, so everybody there knows my story and everybody there is rooting for Tiz.”

After hearing the diagnosis, Sofer grew determined to attend the Derby. With his health beginning to improve, he would have met that goal, but decided not to attend because of the coronavirus outbreak.

“I am devastated,” said Jack Knowlton, the managing partner of Sackatoga. “He just loved the game. He was passionate about it. This is a big loss for Sackatoga and for me personally, He was one of the people I was closest to. We spent an awful lot of time together, particularly at Saratoga. He was just a great guy.”

Sofer was born in Queens and had been a lifelong fan before deciding to go into ownership. He bought a few horses on his own and went in on some others with the team at Hidden Brook Farm. He met Knowlton in 2008 and decided to give Sackatoga a try after watching the stable's Doc N Roll (Wheelaway) win the Cab Calloway S. for New York breds at Saratoga.