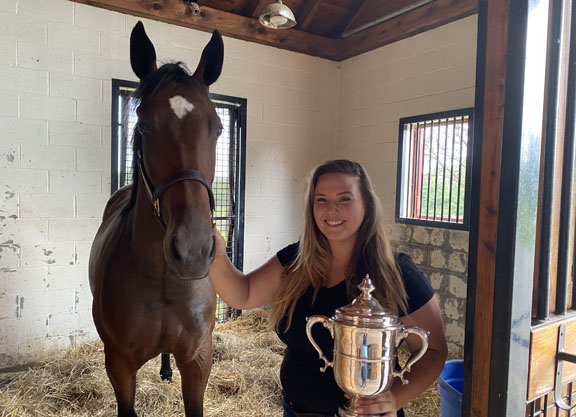 For up-and-coming horsewoman Sabrina Moore, co-owner and operator of GreenMount Farm in Glyndon, Maryland, two of her greatest accomplishments revolve around Maryland breeding and racing.

Last year Knicks Go (Paynter), a colt she co-bred with her mother Angie Moore, was named Maryland-bred Horse of the Year after winning the 2018 edition of the GI Claiborne Breeders' Futurity and running second in the GI Breeders' Cup Juvenile behind Eclipse Award winner Game Winner (Candy Ride {Arg}).

“When Knicks Go got Horse of the Year for the Maryland-bred awards, that was really special to me,” Moore recalled. “I'm a little biased, but I love Maryland. I love all the history. To know his name is always going to be there was really cool. We claimed his dam off the track and she was very near and dear to my heart. I thought once in my lifetime I might get a graded stakes horse when I was 50 or something, but for it to happen so soon and out of a mare that was so special to me, it was really surreal.”

“I've been attending the yearling show for years, so to come out on top was something that was so special to me,” Moore said. “The filly had a rough start. Her mom actually had colic surgery when she was by her side. I typically sell as weanlings, but I held onto her because I didn't feel like she was at her full potential, and I'm really glad I kept her.”

The filly out of stakes winner Mystic Love (Not For Love) went on to bring $100,000 at the Fasig-Tipton Selected Yearlings Showcase, selling to Frank Brothers as agent for StarLadies and Mathis.

Moore's interest in the industry was piqued early in her childhood when her family moved to Glyndon, Maryland- a community less than 20 miles from Pimlico Race Course.

“As a kid, I loved horses,” Moore said. “My mom went to the Preakness every year and that's kind of what got the ball rolling. I loved watching the Preakness. I wanted to work with horses, but I didn't know how. Little did I know how involved everything was to get into it.”

After graduating high school, Moore took a job at a breaking farm, and then worked a stint at the track.

At the same time, her mother was involved in several broodmare partnerships. Eventually, the mother-daughter duo decided to go out on their own.

“We picked up a free broodmare, which was probably the most expensive thing we ever invested in,” Moore said with a laugh.

As their small broodmare band grew, Moore's local veterinarian encouraged her to foal out the mares herself at their family's GreenMount Farm.

“She taught me everything,” Moore recalled. “At first it was just our own horses, but there was a need in the neighborhood to outsource and I started picking up clients.”

Now just a few years later, Moore foals out up to 30 mares a year, but she's discovered her real niche in working with yearlings.

“When I first started, I would take babies out of fields and just start handling them,” Moore said. “It was so rewarding to take these horses that were not so thrifty and sometimes badly behaved, and turn them into professional animals that could do their jobs.”

Moore grew increasingly fascinated with the sales aspect of the business, so she started working with agent and consignor Bill Reightler.

She recalled her first time attending the Keeneland November Sale, “When I got there, my jaw dropped. I was so impressed with the quality of horses. I wanted every bit of it. So I made a five-year plan and I told Mr. Bill, 'Eventually I want to consign on my own.'”

After working with Reightler for the appointed five years, she took the plunge.

“It was really scary to go out on my own and try to find my own clients,” Moore admitted. “You have to get confident really quickly and be bold. It took a lot of courage, it was a lot of learning and it really pushed me out of my comfort zone.”

The GreenMount Farm banner was first on display at the Fasig-Tipton Midlantic Fall Yearling Sale in 2017 and has been a fixture at the auction since.

“I love Timonium,” Moore said of taking her consignment to the annual Midlantic yearling sale. “Primarily I have Maryland-breds, so selling them here makes more sense. I try to bring nice horses so they stick out more as bigger fish in a smaller pond, as I like to say. But it's getting tough over the years. There's some really nice horses here and people are picking up on it. I don't feel like it's a disadvantage here instead of going to Kentucky because for a regional market, it's fantastic. I think if you have the right horse that fits the sale, you'll sell just fine here.”

In just a few days, Moore's self-run consignment will have its largest group at the fall auction to date with 10 yearlings cataloged under the GreenMount Farm banner for the two-day sale starting on October 5.

“This year, I feel like I have a really nice, diverse group going in,” Moore said. “I have some higher-end horses and some regional horses that may not have the fanciest pedigrees, but are useful, correct horses that anybody will be able to benefit from.”

Of the current market going into the auction, Moore said, “I was expecting it to be a lot worse, and I think the sales companies have done a really good job in getting horses sold. I'm pretty optimistic. I think everyone is still going to be showing up with their checkbooks.”

Moore has been dipping her toes in the pinhooking game for several years, but she has hopes that one yearling in this upcoming sale could be her breakout find. 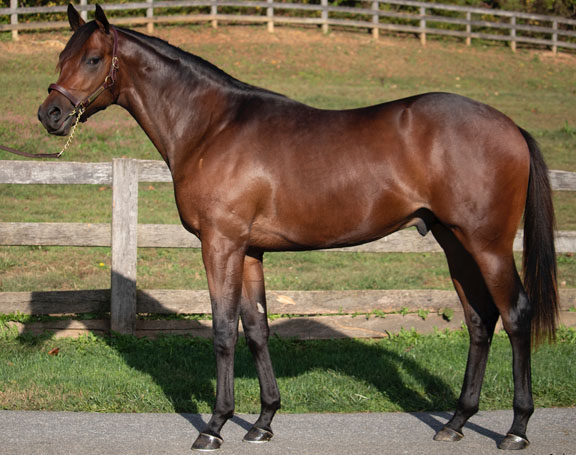 At last year's Keeneland November Sale, the first crop of weanlings by Klimt (Quality Road) stuck out to her.

“I didn't go down specifically looking for them, but I just kept seeing them in the book. They were so nice physically, but they were selling well and I thought, 'Man, I should probably move on.'”

When she saw the last Klimt weanling on her short list go through the ring, a colt out of the stakes-placed mare Cabo Time (Grand Slam), she couldn't leave him behind and purchased the youngster for $36,000.

“After I saw him, I wasn't really high on anything else. So I went over my budget a little bit,” she admitted. “I hope it will pay off. He's matured into a really nice horse and I think he'll suit anybody. He's really attractive, correct and athletic. I'm hoping he'll turn some heads.”

Catalogued as Hip 484 for the upcoming Fasig-Tipton Midlantic Fall Yearling Sale, the colt will go through the ring during the second session of the auction.

“I think when you have a Maryland-bred, it's a pretty lucrative deal. Our breeder incentives are really nice, and Fasig-Tipton [Timonium] is right up the street. We have a lot of really talented trainers and year-round racing. We have some really nice local stallions for people that want to breed regionally. In the long run, [the Maryland program] helps the breeder out a lot. I think you're well off here.”