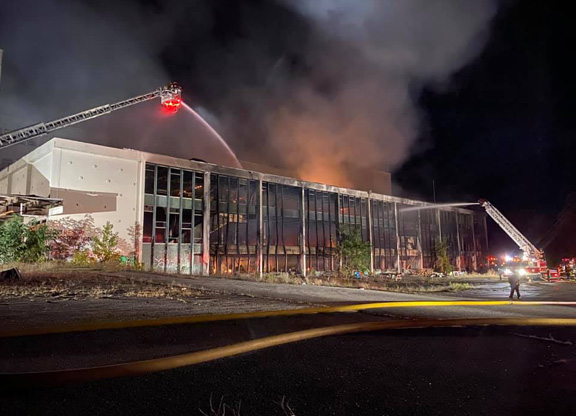 The Vermont Arson Tip Award Program is offering a $5,000 reward for information that will lead to the arrest of anyone involved in the suspicious fire that consumed the Green Mountain Park grandstand in the overnight hours of Sept. 15-17.

The former track, located in the southern Vermont town of Pownal near the borders of Massachusetts and New York, last ran a Thoroughbred meet in 1976 and had been closed for racing since 1991 after converting to a greyhound configuration. The building was abandoned and no one was hurt in the blaze, which had to be quelled by 10 fire departments using 20 trucks

A report issued late Thursday afternoon by the Vermont State Police Fire and Explosion Investigation Unit noted that the fire within the grandstand was not the first in recent months, and that partiers and/or vandals trespassing on the grounds were believed to have been involved.

The report stated that “the building was the scene of several other small fires over the summer which had been put out by the fire department as well as numerous events of vandalism and littering throughout the property. These were deemed to be young adults hanging out in the area and entering the building to vandalize the structure, skateboard, and even more recently, ATV riders were noted inside the structure driving around.

“The fire progression was extensive and it was decided by the fire chief to only fight the fire from the exterior to prevent injury or possible death by any internal firefighting efforts by fire personnel,” the report continued. “Based upon the examination of the exterior and noting several areas of collapse in the roof and the damage to heavy support columns to the three-story steel and concrete building it was deemed too dangerous to conduct an internal examination.”

The report stated there was no electricity powering the structure. The Berkshire Eagle further reported that the grandstand, which was once fairly secure and monitored by video surveillance, “has sustained water and other damage from roof leaks and a flood that overflowed the nearby Hoosic River and entered the lower sections.”

Stephen Soler, managing member of Green Mountain Race Track, LLC, which owns the property, told the Eagle that “a significant amount” had been spent this year to re-secure the building. He said the fire should be considered arson “since they had to tear down boards to get in there.”

As recently as April, the Eagle reported, Pownal town officials had been concerned about “reports of youth and others entering the grandstand for parties or other reasons and sometimes starting campfires on the cement floors.”

The Eagle quoted a Pownal zoning official who said the town determined in the spring that “it did not have legal authority to force the owners to demolish the grandstand building, which has been informally estimated to cost hundreds of thousands of dollars. But officials will likely reconsider Pownal’s options in light of the fire damage.”

Green Mountain first hosted Thoroughbreds in 1963 and added Standardbred racing a year later. In 1968, the track was the first on the East Coast to host Sunday racing, drawing busloads of horseplayers from as far away as Philadelphia. Greyhound racing took over in 1976. With the occasional exception of non-pari-mutuel harness racing at several county fairs, there has been no racing of any kind in Vermont since then.