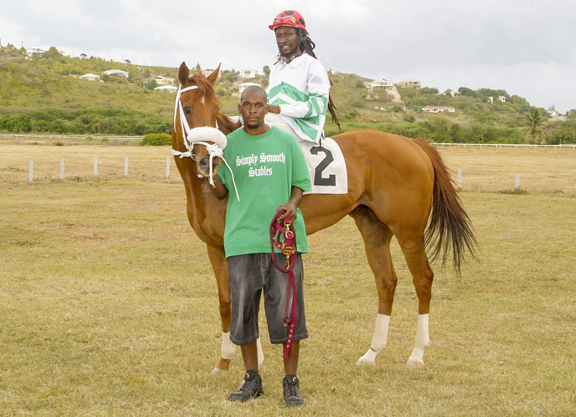 There has not been any racing in Antigua since June, 2019, and when it does return it will be contested at a bare-bones track that is too small, too narrow and doesn’t drain properly. There’s no certainty that racing in Antigua can survive, which is why a local horseman named Hansen Richards is behind an ambitious plan to build a new track on the Caribbean island.

“After all the work I have done, I cannot sit back and do nothing,” the trainer said. “I want to put horse racing in Antigua on the map.”

That won’t be easy. Richards is not a wealthy man and racing in his country is overrun with problems. But he believes he can find investors to help him fulfill his dream. He wants a new track to be the centerpiece of a multi-purpose facility that would include restaurants, shops, beach condos, a marina and, eventually, a casino. He has already found the land for the project, 377 acres that is valued at $32 million. The project would be similar to what the China Horse Club did when building a racetrack in Saint Lucia.

All Richards needs now is someone with deep pockets.

“I want to find an investor who can see the vision I have going forward,” he said.

Richards works as a customs inspector and trains as a hobby. He grew up poor and in a neighborhood where crime was a problem. He is inspired by the thought that his project could create jobs for his fellow countrymen.

“I was raised up in the ghetto,” he said. “I look at this as an opportunity to raise standards of living for my community and for my friends. Unfortunately, some of them have lost their lives to violence. I made a vow I would make our society better and provide some jobs and programs out of the horse racing industry.”

He originally wanted to play professional basketball at some level, but reversed course and started training in 2007. In Antigua, it’s not a job where anyone can expect to make a living, but there are people like Richards who are so passionate about the sport that they’ll dedicate many hours a week to training.

He is also working on creating a stud book for horses bred in Antigua. That would allow them to race in other Caribbean countries and, perhaps, in the U.S.

They’ve been racing at Cassada Gardens Race Track since 1964, running anywhere from 12 to 20 dates a year. Richards’ father was an owner, trainer and breeder and he brought his son to the track a time when he racing was a popular pastime on the island.

Richards said that since racing reached its peak in Antigua, interest in the sport has dwindled and now a typical crowd might be 2,500. He said that one of the reasons is that little has been spent on upkeep or improvements and fans don’t want to spend the afternoon in what he says is a rundown Cassada Gardens facility.

The problem has only been compounded since June, 2019, when the final leg in the Antigua Triple Crown series was run. A spate of wet weather that began last summer caused racing to be canceled for the remainder of 2019 because the track was not fit for training. COVID-19 has kept the track closed this year. A possible re-opening in December has been mentioned by officials of the Antigua Turf Club.

But Richards doesn’t see Cassada Gardens as the future of Antiguan racing. It is lacking in many basic amenities and the racetrack itself is a 5 1/2-furlong track that is just 40 feet across and can’t handle a lot of rain.

“Our major issue of concern is the racing surface,” he said. “It has always been an issue and when you have inclement weather the horses cannot exercise.”

Another issue is the purses. They are so small that owners have little incentive to invest in horses. Richards said an average purse would be in the neighborhood of $800 U.S. Normally, Antigua gets most of its horses from places like Puerto Rico and Florida.

“It cost $6,000 U.S. to fly horses here from Miami,” he said. “That is a lot of money when you look at the purses. I do not encourage anyone to purchase horses to run here. I do it because I love it and I know what I am getting into.”

With a new racetrack, he sees Antigua simulcasting its product to other countries, picking up additional sponsors and increasing the amount of money brought in by gate receipts. There’s also the possibility of having a casino help fund purses.

Richards has created the company Mecke Development Corporation and has given himself the title of Managing Director. For now, it is little more than a concept. But its head executive is enthusiastic, driven and has a plan. He sees great potential for horse racing in his country and says he will do what it takes to ensure its future.