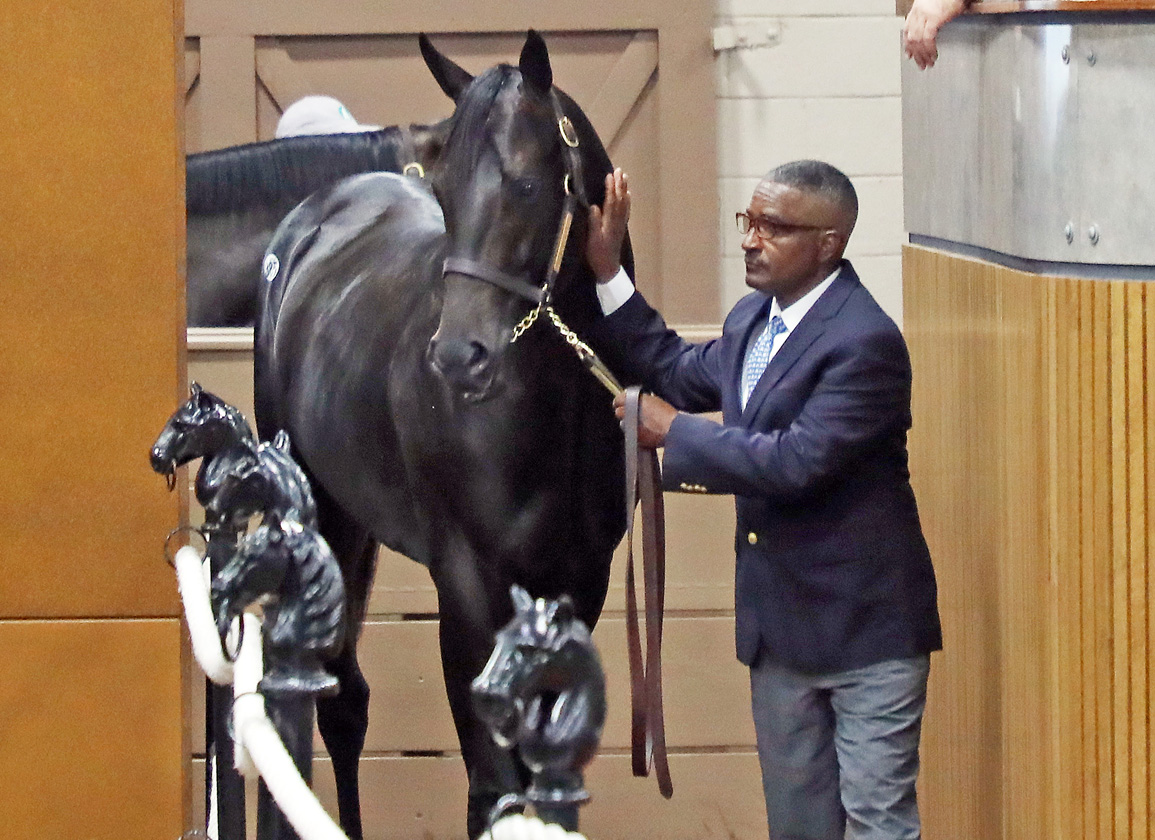 “Last year was such a wow year and, when I come to the next year, I always ask, can we exceed what we did last year,” said Fasig-Tipton Midlantic Sales Director Paget Bennett. “And we certainly blew it out of the park. Next year could be tough. We are tickled to death with records for average and gross and record price for a horse sold in Maryland.”

The median was the auction's only statistic to fail to surpass its 2021 high-water mark.

Some buyers stepped in to take advantage of the softer middle market. David Meah of Meah/Lloyd Bloodstock was pleased with the six horses he is taking home from Timonium.

“I found a lot of very nice horses here,” Meah said. “It's a great sale. I think the market has leveled out a little bit, so it's a bit easier to buy, which is great for me personally. We managed to buy six so far, so we've been very happy with the market and what was on offer here.”

Meah continued, “It's been extremely hard to buy for the last 12, even 18 months, but I think it's just diluted a little bit now, come May. I found it a lot easier to buy horses this week.”

Raul Reyes's Kings Equine sold 25 of 33 horses through the ring this week and enjoyed a number of pinhooking scores.

“I think the market was great,” Reyes said.

Of a potentially soft middle market, he added, “It's been that way ever since I can remember.”

With an eye-catching :9 4/5 bullet breeze, hip 385 was no secret when he entered the sales ring Tuesday and when the dust had settled after a bidding duel between West Point Thoroughbreds and Gary Young, Young had secured the youngster for Amr Zedan for a sale record $3.55 million. The colt was the most expensive Thoroughbred ever sold at public auction in the state of Maryland, bettering the previous record of $1.8 million set by Gamine at the Midlantic auction in 2019. It was the eighth straight year that the Midlantic sale had produced a seven-figure juvenile.

“It just goes to show people can feel confident about bringing that type of horse to the marketplace here in Maryland,” Bennett said of the record colt. “My goal has always been to have two seven-figure horses, but I will take a $3.55 million one. I hope we get him on the cover one day.”

A colt by Bernardini (hip 385), who advertised himself with a :9 4/5 work last week, ignited a bidding duel between West Point Thoroughbreds and bloodstock agent Gary Young in the Midlantic sale ring Tuesday. Young, doing his bidding out back while standing alongside advisor Charlie Boden and trainer Bob Baffert and on the phone with Saudi businessman Amr Zedan, answered every bid from the West Point team doing its bidding at the back of the pavilion to ultimately secure the colt for a sales-record $3.55 million.

The juvenile was consigned by Becky Thomas's Sequel Bloodstock on behalf of his breeders Chester and Mary Broman. He is out of G Note (Medaglia d'Oro), a daughter of graded winner Seeking the Ante (Seeking the Gold) and half to stakes winner Mineralogist (Mineshaft), as well as to the dam of this year's GII Rebel S. winner Un Ojo (Laoban).

“He did everything,” Young said. “He went :9 4/5 and in the videos, sometimes horses when they straighten up the backstretch they are pretty well spent, but he just kept firing up the backstretch. His third furlong was super.”

All four purchases reflect Zedan's desire to get back to the GI Kentucky Derby, where he was represented last year by the ill-fated Medina Spirit (Protonico).

“You don't think of Bernardinis as :9 4/5 horses, as much as he's been a good sire for a long time, you think of horses that run longer,” Young said. “And that's what Mr. Zedan wants. He has Derby fever. That's his main focus. We will know in about five or six months how this turns out.”

Hip 385 is the most expensive Thoroughbred sold at public auction in the state of Maryland, surpassing the $1.8 million set by Gamine at this sale in 2019. It was the eighth consecutive year that a horse selling at the Midlantic 2-year-old sale sold for seven figures.

Longtime New York breeders, the Bromans began selling select offerings as part of an estate planning program four years ago. The planning got a jump start with the $2-million Chestertown (Tapit), who topped the 2019 OBS March sale and is campaigned by a partnership that includes West Point Thoroughbreds and the Bromans themselves. Chestertown's half-brother by Into Mischief sold for $1 million at this year's March sale.

“It's huge,” Sequel's Carlos Manresa said of Tuesday's record-setting result. “It just goes to show how much the Bromans can be rewarded for the time that they have put into breeding these mares and keeping these families. It's especially wonderful to have Mr. Broman here for the sale. Whenever we feel like we have something that we think is really going to be exciting, he likes to be here for it. This was certainly an event that called for him to be here.”

Describing the colt's progression, Manresa said, “He's always been really calm around the barn. He is really well behaved and really well mannered. He gallops so calmly, but when we asked him to go fast, he went really fast.”

The colt became the first horse in a decade to shade :10 at the Maryland State Fairgrounds when he worked during last week's under-tack show.

“We knew he would go fast, we just didn't know he'd go quite that fast,” Manresa admitted. “We never expected a :9 4/5, but we were very pleased that he gave it to us.”

Manresa said the result was gratifying for the entire Sequel team.

“Any time you can be part of a horse that brings seven figures, it's really special,” he said. “Not just for me, but for everyone at the farm. Everyone is watching from home and they are all texting me and congratulating us, from the grooms, to the guy who does our track, to the blacksmith that does his feet every month. It's a wonderful team.”

Breeders Ralph Kinder and Erv Woolsey had no hesitation when taking home their American Pharoah filly (hip 443) after she RNA'd for $145,000 at the OBS March sale following a :10 1/5 work over the synthetic surface in Ocala. Rerouted to Maryland, the filly worked a furlong in a bullet :10 flat over the dirt last week and rewarded the partners' decision when selling for $500,000 to trainer Cherie DeVaux.

“She did not like the surface down there, she didn't relax over the surface,” Kinder said of the OBS work. “She's a better horse on the dirt. She galloped out great here and her video was off the chart.”

The filly is out of Jordan's Henny (Henny Hughes), who won the 2018 GIII Hurricane Bertie S. and placed in four additional graded races for Woolsey and Kinder, and is a third generation product of their breeding program.

“We raised her and still have her granddam–all three generations–that's the third generation,” Kinder said. “We were a little hesitant to sell her because we race as well.”

Asked why the partners had decided to sell the filly, Kinder laughed and said, “Economics.”

Another Filly for Black Type Team

The Black Type Thoroughbreds partnership has already had success buying gray fillies from Ciaran Dunne's Wavertree Stables consignment and went back to that formula when purchasing a daughter of Malibu Moon (hip 487) for $500,000 Tuesday in Timonium. The group, founded by Jake Ballis, purchased Grade I placed Up in Smoke (The Big Beast) for $230,000 at the 2019 Fasig-Tipton Midlantic sale.

“We love fillies,” Black Type's Maddie Mattmiller said after signing the ticket on the filly alongside Ballis and television personality Jonathon Kinchen, a newcomer to the partnership. “We have had good luck with gray fillies off of Ciaran Dunne. He has always given us good advice when we've found one we like over there.”

“She was a big filly with a ton of leg under her,” Mattmiller said of the filly's appeal. “She looks like she can go two turns. She carried herself well and she has good pedigree behind her, out of an Unbridled's Song mare.”

A newcomer to the Black Type partnership, Kinchen also teamed up with Ballis and Mattmiller to purchase a colt by Mosler (hip 454) for $165,000 earlier in the session.

“I've known Maddie and Jake for a long time, so when I decided to do this, I was obviously going to do it with their guidance,” Kinchen said. “We are excited about it. [Hip 487] will go to New York and likely be with George Weaver. We can keep an eye on her all summer while we are up in Saratoga. It should be a lot of fun.”

Mattmiller added, “We love Jonathon's support. We are excited to have him in the Black Type team. We have a good group of guys, so Jonathon only adds to that excitement.”

Raul Reyes of Kings Equine cashed in on the popularity of first-crop sire Bolt d'Oro Tuesday in Timonium when selling a colt by the Spendthrift stallion (hip 364) for $500,000 to Holly and David Wilson. Reyes purchased the youngster for $40,000 at last year's Keeneland September sale.

“He looked really nice, very strong and very handsome,” Reyes said of his initial impressions of the colt. “I got lucky. He was late on a day in the sale and I had a chance to buy him right. He kept developing the right way. He got bigger and he never went the other way.”

“Every year, I try something different,” Reyes said of his approach to the Maryland sale. “You don't always hit it. I brought the Bolt d'Oro, a first-year sire, and he did great. You never know what horse is going to work out. Just when you think you've got it, it goes different.”

Eight juveniles by Bolt d'Oro sold at the two-day auction for an average of $309,625, topped by a $675,000 colt sold by Pike Racing to Spendthrift Farm and Frank Fletcher Racing during Monday's first session.

Thank you to our buyers and consignors for supporting the Midlantic Two-Year-Olds in Training sale. The sale has ended.