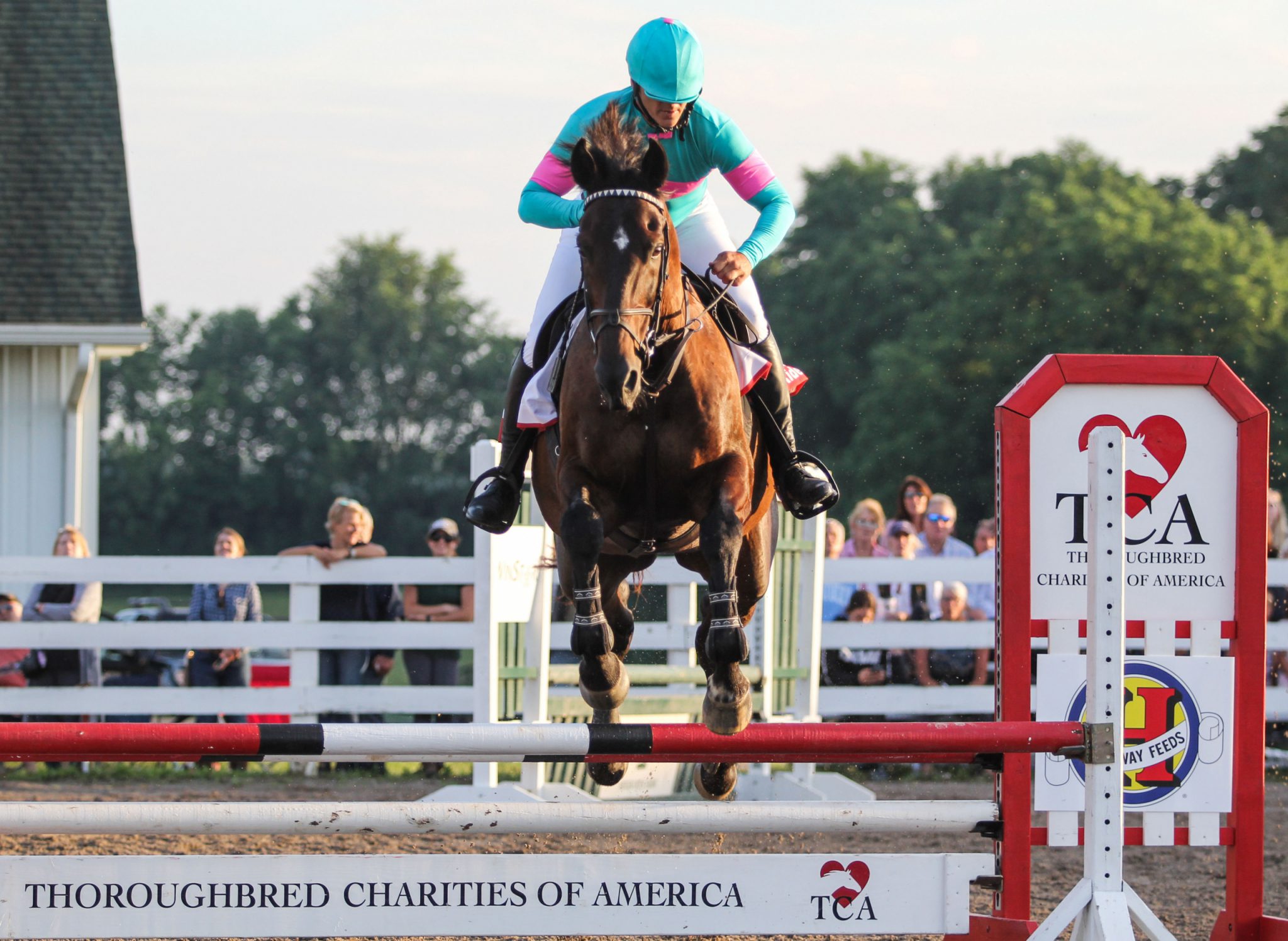 LEXINGTON, KY–With a rainy, cloudy afternoon turning into a perfect sunny and 72-degree evening, the racing industry was out in full force to support retired Thoroughbreds in the Real Rider Cup. Typically held in the fall at Fair Hill, it was the first time the event was being held in Lexington at New Vocations' Mereworth Farm and the rail was packed with familiar faces, such as Christian Black, Mike McMahon and Aidan and Leah O'Meara, to support this great cause initiated by Anita Motion.

Thirty-one riders completed a 2'6″ jumper course Saturday evening, all sporting the racing silks of a sponsor stable and all riding off-track Thoroughbreds. Some of the human standouts were jockeys Rosie Napravnik and Aaron Gryder and the equine celebrities included Cozmic One (Bernardini), first foal out of Zenyatta, and GSW Stickstatelydude (First Dude).

The riders were split into nine teams and, in addition to their stable sponsorships, were tasked with garnering monetary donations, all of which went to aftercare organizations, such as New Vocations and the Retired Racehorse Project.

After 31 exciting rounds in the ring with Terence Collier on the mic, New Vocations' Anna Ford announced that over $89,000 had been raised so far and they were still counting.

In the individual results, first place went to Jesslyn Woodall, who rode Lead Player (Posse), while sporting the WinStar silks. Second went to Keira Nygaard, wearing the Thord-Bred silks aboard Judge Johnny (Empire Maker) and third was awarded to Tara Coombs, donning the silks of September Farm on the unraced Baptizo (Magical Eight).

The top team of the evening was team Blood-Horse, comprised of Woodall, trainer John Ennis on Sound Prospect (Eastern Echo) and Lauren Gash aboard Collaborator (Any Given Saturday). Second went to the Breeding and Bloodstock team, comprised of Sergio de Sousa and Cozmic One, Jocelyn Brooks on Perpetual Optimism (First Defence) and Nygaard. The third-place team was Off-Track Sporthorse, led by Napravnik on Banana Thief (Kitten's Joy), Emily Crow and Emily Swirsky, who both rode Old Ironsides (Rubiano), Anne Czerwonka on Subtle Hope (Dialed In) and Kelsey Buckberry on Docktarri (Preachinatthebar).

The Real Rider Cup returns to its traditional home at Fair Hill Sept. 16.