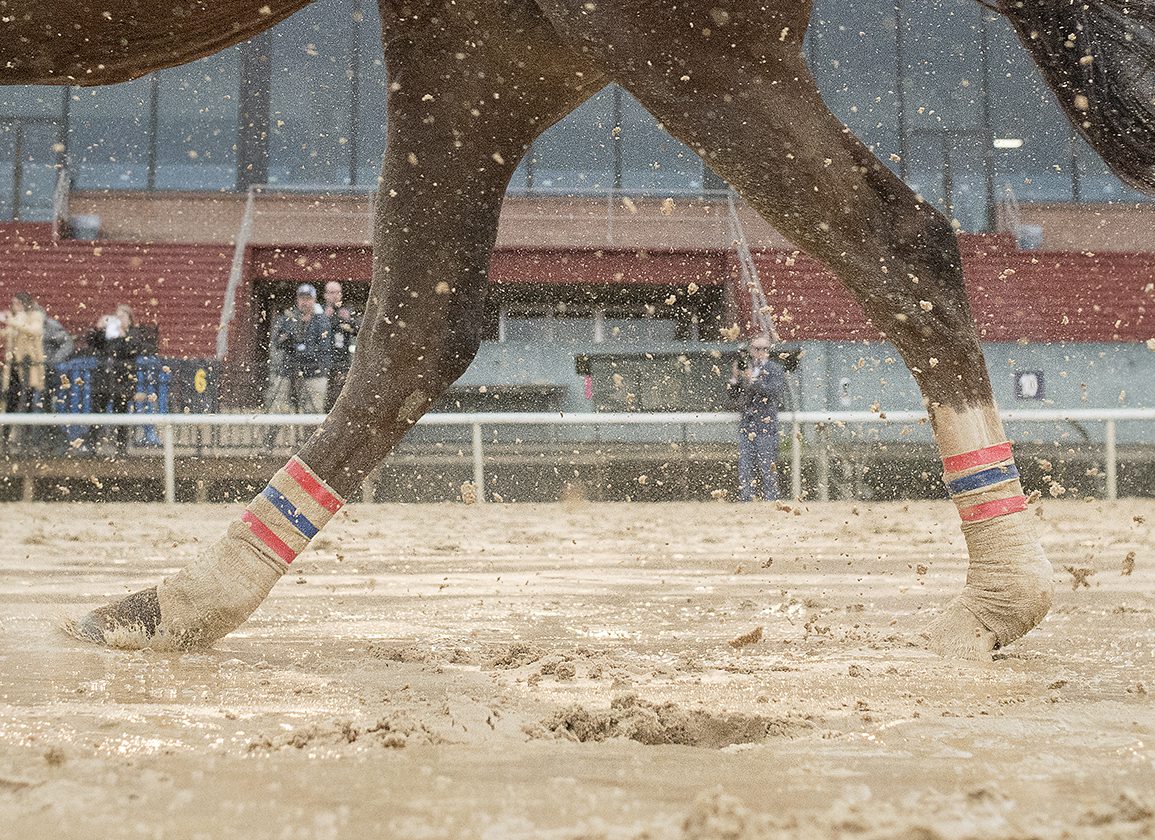 The closer the clock ticks down to Nov. 4, when Turf Paradise's latest 130-day meet is scheduled to launch, the louder will the questions resound about the facility's historically checkered approach to equine welfare and safety.

Anyone with even a glancing understanding of catastrophic injuries knows the complex nature of causality, with the term “multifactorial” much bandied about. One of these important factors, however, is the condition of the racetrack surface–an issue that has bedeviled Turf Paradise in recent years.

To prepare for the upcoming meet–as well as for the Horseracing Integrity and Safety Act (HISA), the racetrack safety portion of which went into effect July 1–Turf Paradise has hired a new track superintendent and has joined forces with the Arizona Horsemen's Benevolent & Protective Association (AZHBPA) to hire noted racetrack expert Steven Wood to oversee these operations.

In many ways, tracks like Turf Paradise–those with more to do to meet HISA's baseline racetrack surface standards–provide something of an inflection point for the federal law, the rubber now meeting the road.

How long do tracks like Turf Paradise have to get up to speed, for example? What are some possible implications for non-compliance?

In the long term, how soon before the data collection components of these federal rules generate the kinds of answers needed to further racetrack surface safety in the U.S.? “Patience,” extolled racetrack surface expert Mick Peterson in answer to the latter. “It's not going to happen overnight.”

The racetrack maintenance component of HISA–summarised here–sets out two main areas of compliance.

Before the start of each meet, tracks are required to perform a set of testing protocols for all dirt, synthetic and turf surfaces. These include the examination of dirt or synthetic surface bases either visually or by using ground penetrating radar, as well as measuring the geometry of turf tracks.

Then on an ongoing basis during the meet, HISA requires a set of daily measurements to be made at all quarter-mile markers at distances of five feet and 15 feet from the inside rail. This includes moisture content and, for dirt and synthetic tracks specifically, cushion depth. 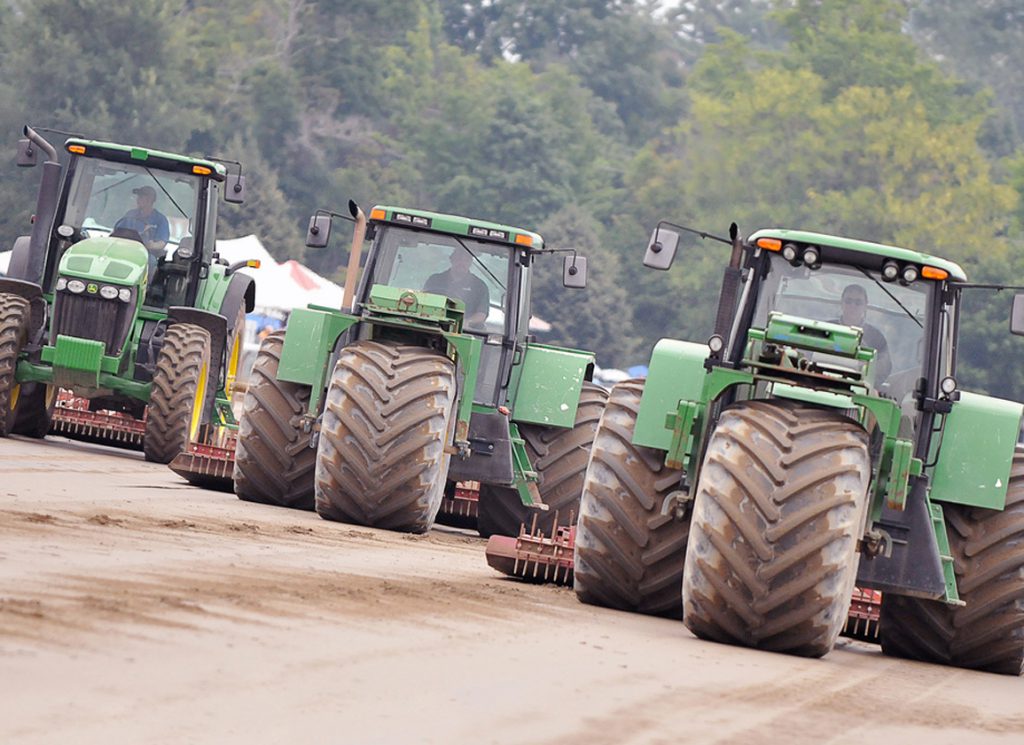 Track superintendents are also responsible for keeping a log of what kinds of daily maintenance they perform on the track surfaces and the relevant equipment used, along with the amounts of water put on the tracks.

Though key regional differences mean no two tracks work their surfaces exactly alike, “our end goal is to have every racing surface feel the same to the horses when they run on it,” said Ann McGovern, HISA director of racetrack safety, mirroring comments made about the work done in recent years at Del Mar and Santa Anita to render their main tracks physical twins–work widely regarded as instrumental in making these two tracks among the safest in the country.

That's the goal. To get there, the rollout it is, like much of HISA's broader mandate, piecemeal.

In short, the reporting component of the law is already very much at play, with track superintendents required to keep daily logs either written into notebooks or submitted digitally.

Where HISA currently affords wriggle room is to the typically smaller, less-resourced tracks that might not have all the necessary equipment to meet new demands.

Has HISA identified a specific date by which all tracks need to be up to speed? “We don't have an end date for that,” responded McGovern, adding that “we plan on giving extra help to tracks that need it, and extra guidance.”

Thistledown Racino in Ohio is one of those tracks playing catch up.

“Implementing everything has taken some time, but we're going the right way,” said long-time track superintendent John Banno. “We might be further behind some tracks, but we might be further along than some others.”

As mandated under HISA, the track has established a safety committee that Banno attends with the safety director and director of racing, along with representatives from the horsemen, jockeys and stewards.

“We cover a lot of bases,” Banno said, about these monthly meetings. “It's mostly about keeping the lines of communication open.” 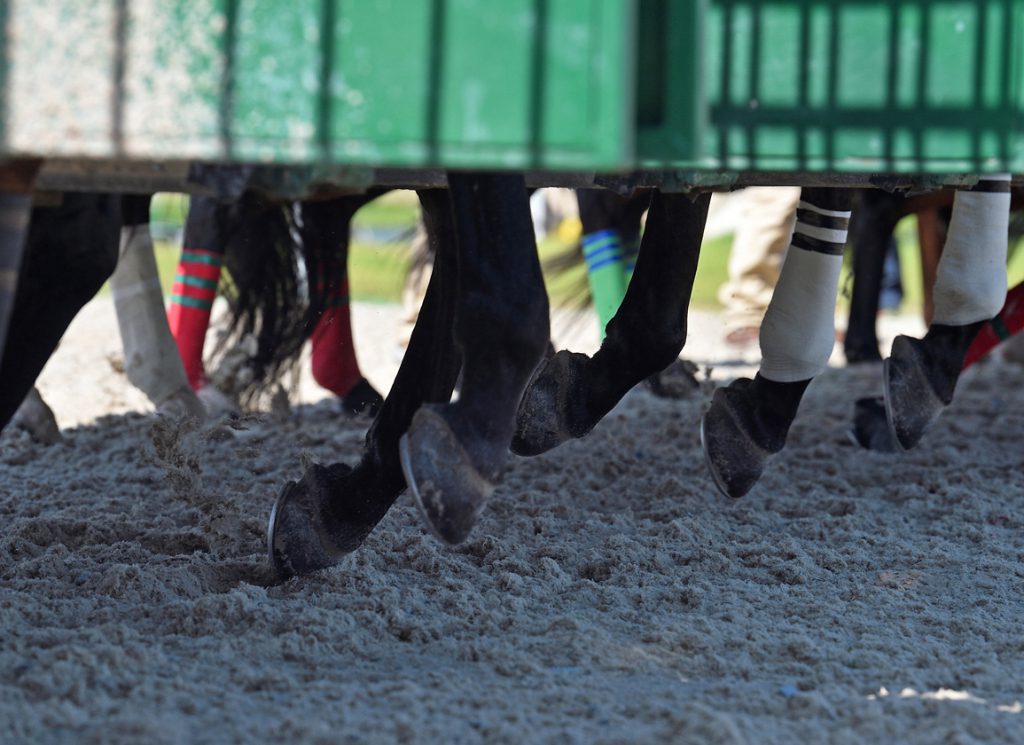 Complying with another new mandate, Banno maintains a written notebook of numbers, details and wrinkles from his workday.

“If I'm putting down 100,000 gallons of water,” Banno said, of the details recorded. “If we use harrows for the first few races and we then switch to floats. If it rains–things like that.”

But as someone “more comfortable with dirt and mud than documentation,” ducks and water would hardly be analogized in the way Banno's taken to the task. “I'm hoping it gets a little more streamlined,” he admitted. Efficiencies can also be made elsewhere.

“I have a wish list every year,” said Banno, pointing out that his crew is working with equipment that is, in some cases, more than 40 years old.

“I'm sure many smaller racetracks have to deal with that, too,” said Banno, pointing out that new equipment is both pricey–new floats or harrows can run up to $25,000 each–and fairly limited in supply.

“As far as I can tell, there's only two vendors that sell this equipment, and one of them doesn't really supply too many things anymore,” he said.

The current Thistledown meet ends Oct. 14 before kick-starting once again next spring.

With more than six months between now and then, Banno has ample time on his hands to prepare for HISA's pre-meet testing requirements. Many other meets are scheduled to launch in the interim.

This is where Peterson, who founded the non-profit Racing Surfaces Testing Laboratory, is expected to step in.

“It doesn't tell you anything”

HISA is in the final stages of reaching an agreement with Peterson for his organization to oversee these pre-meet stipulations.

“Our agreement is to ensure that HISA gets what information it needs when we go to the racetracks to do the testing,” said Peterson. Not that he anticipates the same degree of involvement at all tracks.

“I can tell you what the moisture content was measured at 24 points [around the track] in 2010 at Fair Grounds, every day of the race meet,” he explained.

But not all U.S. track superintendents currently use the requisite tool to measure moisture content–a funkily called time domain reflectometry device. Those that don't typically gauge it the old-fashioned way, grabbing a clump of dirt and squeezing it with their hand. Or through the feel of the equipment on the track.

The good news is that a time domain reflectometry device will set the buyer back around $1,400–hardly a bank-breaker. Nor do these instruments require a PhD in engineering.

“Incredibly simple,” Peterson said, about the device's ease of use. “You just stick it in, press the button.” 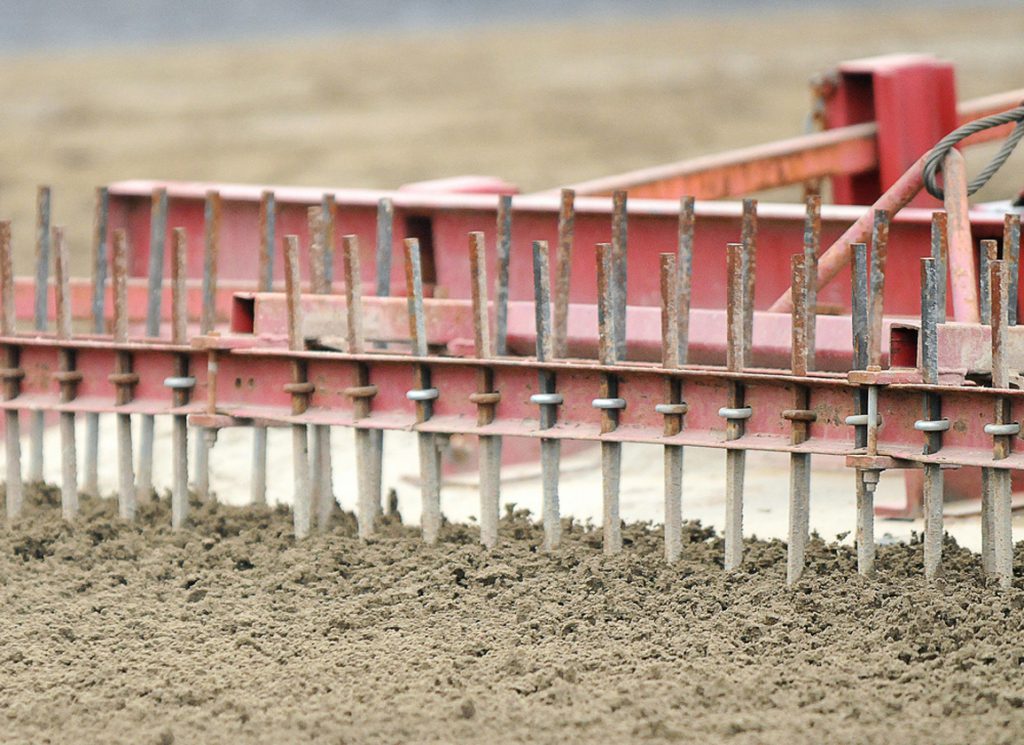 For run-ragged superintendents at under-resourced tracks, arguably the biggest headache under HISA's new regime has proven the time and discipline involved in keeping daily testing and maintenance logs.

Some of the tracks already affiliated with the Racing Surfaces Testing Laboratory use the organization's online portal to record information, though Peterson admits it can still prove laborious, the database something of a Bronze Age relic of the early digital era.

That old software, however, is undergoing a digital facelift. “The new version with The Jockey Club is going to be a lot more user-friendly,” said Peterson. That revamped software will undergo beta-testing at the Keeneland fall meet.

Which leads to the ultimate aim of what Peterson describes as the wholesale collection of “standard data taken in a consistent fashion out of a lot of tracks”: the ability to refine the information to better determine what track surface maintenance practices improve equine safety–and those that don't.

“It doesn't tell you anything,” said Peterson, dismissive of the Clegg hammer–a device measuring hardness and compaction that is still widely used around U.S. racetracks.

Then there's the issue of sealed tracks. In California, for example, horses are not permitted to train on such a surface. According to Peterson, that reticence is probably unfounded.

The “largest study to date from the Equine Injury Database [EID]” found “no significant difference when comparing off dirt versus regular dirt track for risk factors,” Peterson said.

The question then becomes: How soon can we expect the data collected under HISA to bear fruit?

“It's going to take a lot of data,” said Peterson, comparing it to the evolution of the EID.

“The first four or five years, I remember it wasn't clear that the EID was going to contribute any meaningful understanding of catastrophic injuries,” he said. “It took a lot of data, even with full participation.”

Given the steadily shifting sands of public opinion toward horse racing, there's a chance some tracks with dicey safety records might not have that four- or five-year leeway.

“This surface is not right,” warned trainer Kevin Eikleberry during an Arizona racing commission meeting before the 2021-22 Turf Paradise meet when even the commission's head veterinarian bemoaned a lack of thorough and consistent surface maintenance standards.

With a change of crucial track personnel at the Arizona facility in the interim, however, expectations are noticeably higher one year on. 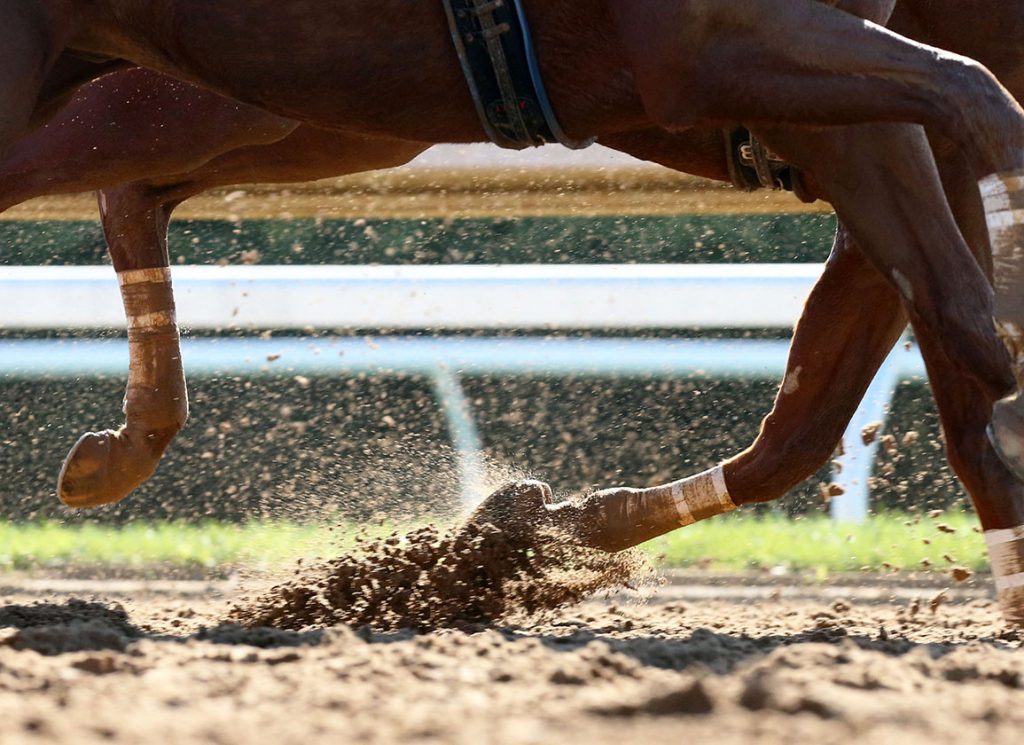 “We've had to make sure the banking is how we want it,” explained Wood, before ticking off a long grocery list of other preparations already conducted at the track, including removing “a lot” of material from the existing surface, and adding tons of new sand and bark, the latter for cushioning.

“All these things should help,” said Wood, before adding that “you're still going to have to have the other guys, the vets and such, do their job” to meaningfully shift the needle.

According to George Lopez, the newly minted track superintendent at Turf Paradise–himself a former protégé of the Wood academy of track management–the facility has also splashed out on new equipment.

This includes a new grader–used to redistribute surface materials–and two new water trucks. “We also have two good tractors now,” said Lopez, who describes his new job as a “challenge” to relish.

“I'm very confident and I'm very sure we're going to have a really good, safe meet this time,” he said.

But what if the meet resumes this November and safety expectations fall short once more?

Stressing the “multifactorial” nature of equine injury, McGovern said that in such an instance, the new federal authority would “immediately” get involved, though stopped short of outlining a clear set of potential actions.

“Getting involved may mean talking to management, talking to the track superintendent, sending Mick [Peterson] to look at the track surface, looking at necropsies, looking at training methods,” McGovern said. “HISA would absolutely react to any track that had numbers as significant as we have seen at Turf Paradise last year.”