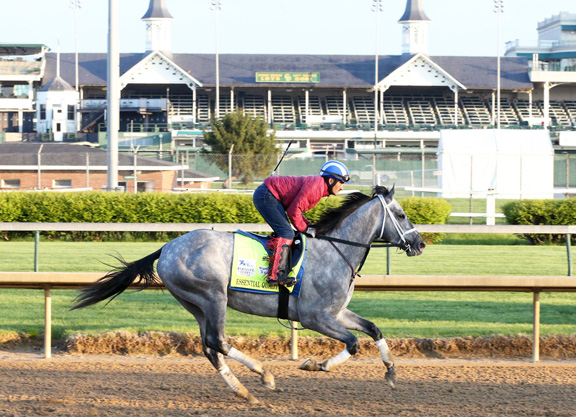 LOUISVILLE, KY – Two years ago, Brad Cox got the phone call that every trainer wants to receive.

“I got a call one day from Jimmy Bell and he said that he'd like to meet me at Churchill one morning,” Cox said of his initial conversation with the Godolphin USA president. “It was an honor to get a call like that. We met in my office and he said that they'd like to send us some 2-year-olds. You knew there were gonna be runners in that group and that they'd all have pedigree. There was no doubt about it.”

From the second crop of juveniles sent Cox's way, a gray son of leading sire Tapit quickly began to stand out from the rest at the 41- year-old's Keeneland division.

“I remember the first time we breezed him,” Cox said. “I looked at my assistant and said, 'Wow, this horse acts like he can win the Belmont.' He just never stopped. He just kept going and going and you're like, 'Woah, we did too much with him.' Then he walks off the track like he did nothing. He gave us a lot of confidence when we led him over there the first time and he's continued to do so every time we've run him.”

“He's moved forward from two to three,” Cox said. “I think he needs to move forward again to win the Derby and I think he can.”

Bell added, “What he's done, it's been a tremendous morale booster for our overall operation. Given the fact that he's a homebred, it just adds so much more to it. We know how special this is and embrace just really what he's accomplished. He's taken us all on such an incredible ride. You've got to dream a little bit in this business.”

Essential Quality's graded stakes placed-dam Delightful Quality (Elusive Quality) is a daughter of the unraced Contrive (Storm Cat). The latter produced champion Folklore (Tiznow), heroine of the 2005 GI Breeders' Cup Juvenile Fillies. Contrive was purchased by Sheikh Mohammed's operation for $3 million in foal to Pleasantly Perfect at the 2005 Fasig-Tipton November Sale. Delightful Quality, also represented by a 2-year-old filly by Uncle Mo, was barren for 2020-21. She was covered again by Tapit this spring.

“We have a collaborative, team effort there [to plan matings] and it was a very good, physical match,” Bell said of the Tapit–Delightful Quality pairing that produced Essential Quality. “She had plenty of speed and Tapit gives you plenty of stamina. The Gone West mares go well with Tapit as well. Each had a little something that maybe you'd like to see in the other.”

The Cox and Godolphin tandem, born in 2019, have also been represented thus far by 2020 GIII Indiana Derby and GIII Oklahoma Derby winner Shared Sense (Street Sense); this term's Bourbonette Oaks heroine Adventuring (Pioneerof the Nile); multiple stakes winner Hieronymus (Girolamo); and the stakes-placed Amongst (Into Mischief). Cox currently has approximately eight head for Godolphin, and in a couple of weeks, will receive another shipment of 15 juveniles.

“I'm really proud to train for them,” Cox said. “Just a class act all the way around. Their outfit is a power in the Thoroughbred industry throughout the world.”

Formed in 1994, Godolphin–recognized three times at the Eclipse Awards as outstanding owner (2009, 2012 & 2020)–has won no fewer than a staggering 255 Grade/Group 1 races worldwide. In 2015, Godolphin merged with Darley Stud to form one company and racing stable in the U.S. As Godolphin began expanding its training roster in search of more of a midwest presence, trainers like Michael Stidham, Cox and Brendan Walsh were easy choices to join the team, per Bell.

“That sort of opened up a different roster,” Bell said. “Brad had just won an Oaks [with Monomoy Girl], showing adept handling of a top filly like that, and obviously bigger things were yet to come. He really was what we were looking for–a young trainer, like himself, as well as Brendan, in that Midwest area.”

Bell continued, “Like all things, it's a bit of an evolutionary process. Initially, early days the primary goal was to compete in New York. That's the top racing circuit and that's obviously where we aspire to compete. As the numbers grew and not everything fit, it gave us an opportunity sort of to step back and really look at the overall geographic spread. Racetracks like the Fair Grounds and Oaklawn, as well as the racing in Kentucky, have improved dramatically, and that trio right there [Stidham, Cox and Walsh] really covered a lot of racing opportunities.”

“The short answer: fortuitous,” Bell replied with a laugh.

“Longer answer is: we have a process we go through. We work very closely with our pre-trainers–David Scanlon, Niall Brennan, Eddie Woods and Meda Murphy at Bridlewood. [Chief Operating Officer, Godolphin USA] Dan Pride and all of us go down there [to Florida] and see a good three-eighths breeze, and, as scientific as you can be, basically get into three baskets of A's, B's and C's. And from there, we sit down and try to divide them up equally and accordingly.”

In addition to the horse to beat on the first Saturday in May, Godolphin's well-spread 'A team' of 3-year-olds this year also included: the Stidham-trained GII Risen Star S. and GIII Lecomte S. runner-up Proxy (Tapit); 'TDN Rising Star' Prevalence (Medaglia d'Oro), who lines up for Walsh in Saturday's GII Pat Day Mile S. on the Derby undercard; and the highly regarded 2-year-old key race maiden winner Speaker's Corner (Street Sense), currently on the comeback trail for Mott.

“Having the good fortune of having more than one good 3-year-old, 2-year-old or older horse, you really would like to have it work out that way that they all end up in each one of their operations,” Bell said.

Cox can certainly relate. This will be the first year that the native of Louisville is represented in the Kentucky Derby. He will also lead over Juddmonte homebred and 'TDN Rising Star' Mandaloun (Into Mischief), winner of the GII Risen Star S.

Cox, a former assistant to Dallas Stewart, struck out on his own in 2004.

“We walked over for Dollar Bill in the Monarchos year in 2001,” Cox said of the former Stewart trainee. “So, I've done a walkover, but looking forward to this one for sure. I grew up by the track and the first Derby I was at was Lil E. Tee–Pat Day's first Derby winner [in 1992].”

He continued, “It's always been the goal to get to the Derby. I've always said I just don't want to be in the Derby, I want to win the Derby. I'm a competitive person. I know the Derby and the Oaks are not races you show up and just win year in and year out. Horse racing is tough. Even if you're doing well and winning at 25% of the time, you're getting beat 75% of the time. To be in a position we're in, I feel very fortunate and thankful. But our team is competitive and we want to execute. I always believed that we could get here and win it. I'm hopeful that this is the year with one of these colts.”

Believe it or not, a native of Louisville has never saddled the winner of the Kentucky Derby in 146 previous renewals. Cox grew up just blocks from Churchill Downs on Euclid Avenue in the south end of Louisville.

“I would never use the words stress, worried or pressure,” said Cox, who is proudly assisted by his two sons, Bryson and Blake. “I honestly don't feel that. I really don't. We obviously have a large stable and stay busy. Not all of my attention is on Essential Quality winning the Kentucky Derby. We have plenty on our plate to keep us busy and occupied.”

Cox continued with a laugh, “Honestly, I think I'll get a little nervous. But once I leg up the riders and the horses are on the track, it could be a long 10 minutes. We'll see how it goes.”

During a December 2015 interview in TDN, Cox said that his goal for the following season was to win his first Grade I race. With that mission accomplished in spades, he has a new target these days. And it's right in front of him for the taking.

“That chase for that Derby,” Cox said. “I'm hopeful that we can pick one off this year. And I have a strong feeling that if we were able to do that, you know, number two would be something we would be after next. These good horses. When you have good horses, it's easy to get up in the morning. We're very blessed.”

Sheikh Mohammed, meanwhile, has certainly been here before, but never with a hand quite like this.

“First and foremost, he enjoys and embraces competition, especially on the world stage,” Bell concluded. “There's no question about it, winning the Derby is a passion of his and a pursuit of his. He's very philosophical about this, and if it's meant to be, it will be. He believes so much in the power of positivity. If there's any pressure, it's self-inflicted. And I think you see that throughout the whole operation, it really comes from the top. He understands it and we're all in this together.”