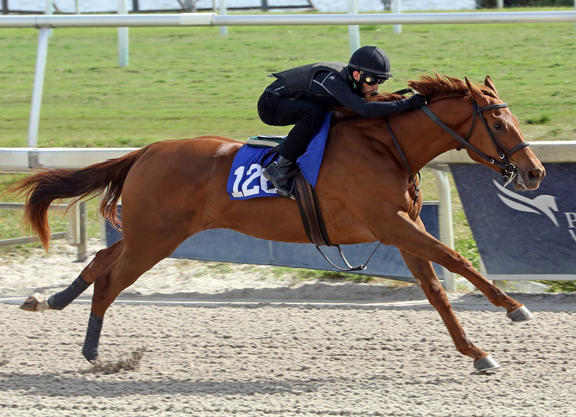 Hip 126, a Curlin filly from the Niall Brennan consignment, hails from the family of Grade I winners Always Dreaming and Hot Dixie Chick. | Fasig-Tipton

Niall Brennan is riding high heading into this week's Fasig-Tipton Gulfstream Sale as this year, a pair of his program's graduates have developed into two of the hottest colts in training early on in the season.

Just last weekend, Godolphin's 'TDN Rising Star' Mystic Guide (Ghostzapper) was much the best in the G1 Dubai World Cup and trainer Mike Stidham said after the race that the 4-year-old colt is just going to get better.

Meanwhile, another Godolphin homebred in Eclipse Champion Essential Quality (Tapit) looks to maintain his undefeated career in this weekend's GII Toyota Blue Grass S. at Keeneland in his final prep looking towards the first Saturday in May.

“I'm very humbled and blessed to have some of the Godolphin horses every year,” Brennan said. “They're very well raised and obviously all have wonderful pedigrees. It's great working with [Godolphin USA President] Jimmy Bell and [COO] Dan Pride. They give you a lot of leeway in developing these young horses. There's no pressure to move them along in the program. Anything that needs time, we just back right off.”

A regally bred 'TDN Rising Star', Essential Quality thrived on the patience given him at Brennan's training center in Ocala.

“Essential Quality just kept getting better and better,” Brennan recalled. “The more we did with him, the stronger he got. The more he liked it, the more competitive he got. The good horses do that. I know when Brad Cox got Essential Quality and he put in his first works at Keeneland, he did everything right and it turned out that he just kept getting better and better and thankfully, he has stayed healthy. That's part of the key when you've got these really good ones, you just pray they stay healthy.”

After securing his Eclipse title last year with a win in the GI Breeders' Cup Juvenile and then taking the GIII Southwest S. in his sophomore debut, the gray colt heads into his final prep sitting at or near the top of most every Derby poll.

“He was an exciting colt, but we treat them all the same here,” Brennan said. “We don't ever think, 'well this one is going to win the Derby.' I mean, you can't get like that. You just take it day to day and watch for the ones that continue to improve and do very well.”

At Wednesday's Fasig-Tipton Gulfstream Sale, Brennan has one filly in his consignment that he believes has done just that.

Hip 126, a Curlin filly bred by Mike Ryan and the late Gerry Dilger, was given all the time she needed to reach her best before going through the sales ring.

“I think she was a little bit immature as a yearling and [Ryan and Dilger] felt like a little more time would only be beneficial,” Brennan noted. “They always loved her.”

“It's a collector's pedigree,” Brennan said. “It's without question, the best pedigree in the book. At the 2-year-old sales, you rarely find a filly with her pedigree, so I would seriously think people would be lined up to get at this filly. She's a lovely physical and a real Curlin. She's got a tremendous way of going on the racetrack with a great presence, great mind and great demeanor. She's the whole package. You don't find many like this, truthfully.”

“When you see her on the track, she just gives you goose pimples,” Brennan said. “But to see her walk home after she breezes, she's like an older horse. I've been lucky to be around a lot of really good horses as 2-year-olds and there's only a few in every crop that have a chance to be very special, and she's certainly one of them.”

Brennan's three-horse consignment at Gulfstream also includes Hip 134, a Flatter filly out of the stakes-placed mare Ire (Political Force) that breezed in :10 2/5, as well as Hip 137, a full-brother to 2016 GI Spinaway S. winner Sweet Loretta (Tapit).

“This horse has grown a lot and he's a good size. He's a stretchy colt with a lot of scope to him,” Brennan said, referring to hip 137. “There's a lot of potential here. It's a very good pedigree and he's a horse that will only improve, no question. He has the ability and the athleticism to be here at this stage, but in his mind, he's going to continue to get better and better as he learns what this whole game is about.”

The son of the stakes-placed mare Ithinkisawapudycat (Bluegrass Cat) breezed in :10 3/5 on Monday.

Brennan said he is optimistic going into this week's juvenile auction following a successful OBS March Sale earlier this month.

“We were very happy with the OBS sale,” Brennan noted. ” The one thing that was the common denominator, the one opinion that all the buyers looking around had said, was that there were a lot of nice horses. Accordingly, I think the results showed that, because it was very strong, it was very fair at the top end but there was a good depth to the market with a lot of people trying to buy horses. It wasn't just that they landed on a few, so I think the market spread out really well.”

He continued, “It bodes very well for the sales coming up that many people are excited about having racehorses. Obviously people were locked down all last year with COVID and couldn't operate as normal. I think some people are more anxious now to get out and get back to living their lives. They want something for this summer and fall and then hopefully into next year as Derby dreaming has started already.”

“As I'm reflecting back, I'm just very humbled to have been around so many good horses over the years,” Brennan said. “With Nyquist, he was a pinhook for Mike Ryan, myself and our partnership, so that's even more gratifying because you're involved the whole way. We loved him all along and the fact that he went on to be what he became wasn't a surprise to us. Obviously he's gotten off to a great start at stud.  They're very consistent and they're very like him.”

Eight second-crop sons and daughters of Nyquist are set to go through the sales ring this week at Gulfstream. Hip 28, the first foal out of the Smart Strike mare Spinning Wheel, led Monday's under-tack show after firing a bullet :9 4/5 work.

One freshman sire that Brennan has high hopes for this year is yet another graduate of his program in 2017 Horse of the Year Gun Runner. The young sire led his class last year by average yearling sales price.

“He was immature as a 2-year-old,  but he was still very athletic,” Brennan recalled. “He had tremendous athletic ability and the will to do it. He was the whole package, he just wasn't filled out into that package yet.”

While it wasn't until the end of Gun Runner's sophomore campaign that he scored his first of six Grade I victories, Brennan said that of the Gun Runner progeny he has seen, they seem to be developing much earlier than their sire.

“I've been impressed with them so far,” he said. “Like him, they love to train and they've got the right attitude. I'd say the only difference I've seen is that they are more mature in their bodies at this stage. They've all got more substance and more strength than their daddy. It bodes well for him because he got better and better as he got older. I think that's what the Gun Runners will do. They can have speed, but I do think they'll stretch out without any problem.”

Five sons and daughters of the Three Chimneys sire are slated to go through the ring at Gulfstream including Hip 100, a half-brother to GISW Finley'sluckycharm (Twirling Candy).

“Good horses excite you, no question,” Brennan said. “It's fun every spring to look at the new crops from freshman sires and see if some of them have that same consistency. Obviously, they have to get lucky and get to good homes to get a chance, but there are several exciting young sires again this year.”

The Fasig-Tipton Gulfstream Sale begins this Wednesday at 2 p.m. Tune in to watch live at https://www.thoroughbreddailynews.com/live/.