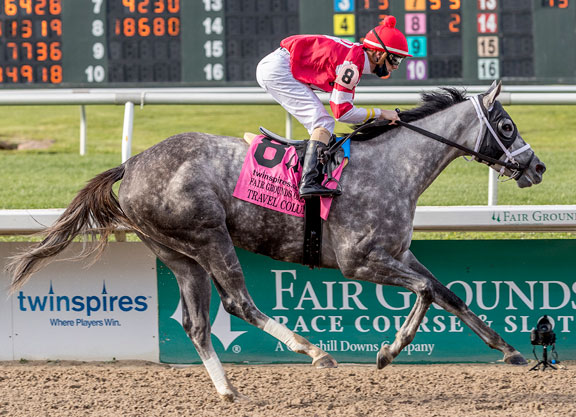 For most of this year, this has been a division where no one necessarily stood out. That all changed last Saturday at the Fair Grounds, where Travel Column (Frosted) won the GII Fair Grounds Oaks, soundly beating her rival, Clairiere (Curlin). Not only did she defeat a top horse, it was a dominating performance. There are still a bunch of preps to go, but unless someone steps up with a phenomenal effort in a prep, Travel Column will be your favorite in the GI Kentucky Oaks.

After running sixth in the Fair Grounds Oaks, Zaajel (Street Sense) drops off our list. We're also taking out Vequist (Nyquist). Though her connections have not announced that she is out of the Oaks after her poor performance in the GII Davona Dale S. on Feb. 22, she has not had a workout since that race, an indication she will not make the Oaks.

The highlight this weekend will be the GII Gulfstream Park Oaks, which will feature Malathaat (Curlin) and Simply Ravishing (Laoban), both of whom will be making a belated 3-year-old debut.

Having trained so many outstanding fillies, Brad Cox is starting to become to the Kentucky Oaks what Bob Baffert is to the GI Kentucky Derby. He's won two of the last three runnings and has the likely favorite this year in Travel Column. It looks like her connections went back to the drawing board after she was defeated by Clairiere in the GII Rachel Alexandra S. Florent Geroux rode her more aggressively as she was never more than a length off the lead. Meanwhile, Clairiere was last at the first call and, from there, had too much to do to catch Travel Column. Travel Column, an $850,000 purchase at the 2019 Fasig-Tipton Saratoga sale, could give owner Larry Best, a very big spender at the sales over the last few years, his biggest win yet.

Is an outstanding filly, but can she beat Travel Column? It's been good to see the two go after one another and create a rivalry that started last year in the GII Golden Rod S. Travel Column has won two of their three meetings and, simply, looked like a better horse in the Fair Grounds Oaks. With both running well this year and with a bunch of others stubbing their toe, it would be no surprise if the Oaks exacta was Travel Column-Clairiere. A horse with no early speed, Clairiere may need a fast pace to set up her run in the Oaks.

Trainer Dallas Stewart is always dangerous in these big races, but it's usually with longshots. This time around, he has a quality filly who may be one of the favorites in the race. She took four starts to break her maiden, but once she made it to the winner's circle she has never looked back. Her win last time out in the GIII Honeybee S. was her third in a row and her second straight stakes win. She has never faced Travel Column, but did finish third behind Clairiere in a maiden race last fall at Churchill. The jockey is 60-year-old Jon Court, who, presumably, would become the oldest jockey ever to win the race.

Because she had a minor setback and missed the Davona Dale S., the connections have had to put all their eggs in one basket in the Gulfstream Park Oaks. Unraced since December, Malathaat will need to move forward off of this race to have a chance in the Oaks. She will also need the points, as the 10 she has accrued so far may not be good enough to get her into the field. A beautifully-bred filly who sold for $1.05 million at the sales, she is undefeated in three career starts, but may not have been beating the top guns in this division. Has been working steadily at Palm Beach Downs for her return.

Trainer Kenny McPeek will take an unusual route to the Oaks, starting this filly in just one prep race. A filly who was very good in the GI Alcibiades S. and not so good in the GII Golden Rod S., she is a bit of an enigma. Like so many other top horses trainer Kenny McPeek has developed, she has turned out to be quite a bargain. She cost just $50,000 at the 2019 Fasig-Tipton Kentucky Fall yearling sale. Broke her maiden on the turf, so if things don't work out for her on her way to the Kentucky Oaks, there's always the option that she could go back to the grass.

The likely favorite in the GII Santa Anita Oaks, a win there would cement her status as the top 3-year-old filly in California. She comes from the Bob Baffert barn, but was not a typical Baffert overnight sensation. She broke her maiden in her second career start after stretching out from 5 1/2 furlongs to a mile and took things to another level when winning the GIII Santa Ysabel S. Baffert will be after his fourth Oaks win and his third since 2011.

Chad Brown is not just a grass trainer. With a filly who could turn out to be one of the better dirt horses he has ever trained, Brown sent her back to New York from Florida for the March 6 Busher Invitational, a move that paid off with a half-length win. She has stayed in New York and is headed to the GII Gazelle S.at Aqueduct. But even if she is to win there, there will be the question of what kind of horses she has been racing against. The New York route to the Kentucky Oaks looks like one of the weakest.

May not be as good as stablemate Clairiere, but certainly belongs in the discussion after finishing second behind Will's Secret in the Honeybee S. at Oaklawn. It was a big effort as it was her first start after breaking her maiden. She probably will need to improve to have a shot in the Oaks, but that is not at all out of the question. Goes out for the team of Steve Asmussen and Stonestreet Stables, which enjoyed so much success with Rachel Alexandra (Medaglia d'Oro).

Hard to know what to make of this filly, who is coming off a win at 52-1 in the Davona Dale. Not only did she win, she blew the field apart, winning by 6 ½ lengths. Is she that good or was the race a fluke? We won't get the results until the Oaks itself as trainer Juan Avila has elected to skip what are, for most, the final round of preps. Will be a big long shot in the Oaks, but if she runs back to the Davona Dale, anything is possible.

Trained by Tony Dutrow, this filly emerged in November with a solid win in a maiden race and followed that up with a runaway win in the Ruthless S. She didn't win in her next start, the Busher, but did pass an important test. In her first start beyond seven furlongs, she set the pace and did not give way until the final yards, losing the one-mile race by a half-length. Has never gone around two turns, so that is another question she will have to answer. If she makes it that far, could be the pacesetter in the Oaks.